Thoughts on At the Galleria Shopping Mall

In “At the Galleria Shopping Mall,” Tony Hoagland expresses anxiety about and dreads the impact of modern American traditions and standards at the beginning of the new millennium. In the second line of the poem, he says “there are some 49-dollar Chinese made TVs. ” This shows how America imports a lot of electronic devices from China, just about everything from TVs to iPhones to computers. Chinese labor is cheaper and quicker, making more sense to do business overseas. This is a stark contrast from fifty to even as little as thirty years ago.

Don't use plagiarized sources. Get your custom essay on
“ Thoughts on At the Galleria Shopping Mall ”
Get custom paper
NEW! smart matching with writer

Since the goods are being manufactured overseas, that means many American manufacturing jobs went overseas as well. “Who is nine and a true daughter of Texas… swinging a credit card like a scythe” (7 and 11) states that Americans are expected, encouraged, even required to know how to shop at such a young age. Lucinda (who is nine) may not know what a credit card is actually for; all she probably knows is that she can get almost anything she wants with it.

It also shows how we are expected to grow up at a faster rate.

The poem shows how materialistic America has become, so much that the Puritans, Transcendentalists, and Founding Fathers would be rolling in their graves. From “comparing the breast size of an actress from Hollywood” (4) to “her favorite sport is shopping” (9), the American way is good looks over good morals. “And let us watch. As the gods in olden stories turned mortals into laurel trees and crows to teach them some kind of lesson” (18-22) implies that religion no longer comes first in the United States, and a religious person may think that their Lord will punish this country for their sins.

Meanwhile, from an economic and political point-of-view, it foreshadows how America’s disconnection from reality will lead to its downfall. Once the country does collapse, it’s going to be a scary drop. “So we were turned into Americans to learn something about loneliness” (24). America is the first and best at being materialistic and its emphasis on consumerism has spread around the world. As a nation professing individualism, and therefore individual consumer choices in the marketplace, Hoagland’s anxiety rises from our freedom to buy whatever we want. Our choices increasingly isolate us in America. For that, she truly is a lonely country.

Thoughts on At the Galleria Shopping Mall. (2017, Jan 07). Retrieved from http://studymoose.com/thoughts-on-at-the-galleria-shopping-mall-essay 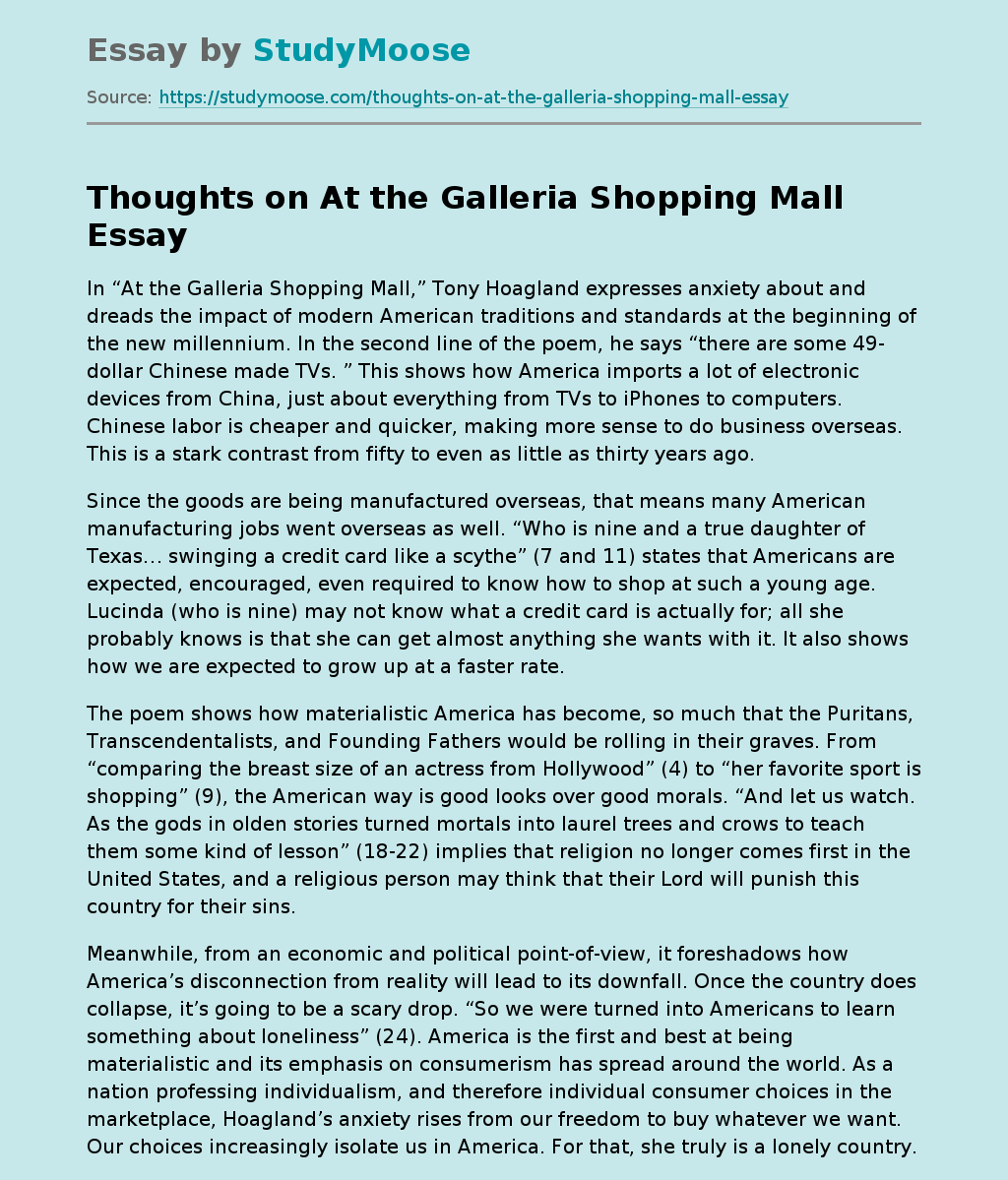