Few men can compare to Thomas Jefferson in terms of articulation and benevolent philosophical views. He was a brilliant man whose verbalization formulated the United States’ Declaration of Independence from mother England. Jefferson was a man who believed in the preservation of individual liberties and equality, principles that are necessary for a nation to flourish. He was the country’s first secretary of state, and eventually he would become the third president of the United States. Jefferson helped establish the country that exists today, and his contributions remain observable 186 years after his passing.

Don't use plagiarized sources. Get your custom essay on
“ Thomas Jefferson: Hero or Hypocrite ”
Get custom paper
NEW! smart matching with writer

His likeness is now etched upon a mountainside in South Dakota, as if he is still watching down on the country his hands helped mold. He consistently opposed formation of strong central authority for fear it would dawn tyranny.

Instead, he much preferred small government intervention. Jefferson is known as a wise and influential founding father by historians and scholars alike. Upon reviewing Jefferson’s credentials and beliefs, one would conclude him to be a great American hero.

Yet, deeper investigation proves that Jefferson’s ideologies often strayed far from his actions. Although this is true, I believe Jefferson’s actions, though detested today, were essential for his time and should not be scrutinized by our modern-day values. Jefferson tirelessly argued for less government authority. He believed that those who held political positions should be granted limited powers that are strictly expressed by the constitution. When America’s National Bank was being conjured, Jefferson strongly opposed.

He relentlessly objected its creation, deeming it unconstitutional (Carnes 156-157).

When Jefferson took office, he had finally gained authority to repeal the National Bank, yet he did not. This may seem hypocritical, yet Jefferson’s decision to sustain the bank was backed by logic and reason. It had produced many beneficial effects for America, such as aiding in the reduction of the national debt (Davies). Jefferson recognized its success, and chose to preserve it, thus alluding to the fact that Jefferson imposed his authority with America’s interest in mind. Upon Jefferson’s presidency, he purchased the Louisiana territory (Carnes 177). From the perspective of some historians, such a purchase would be outside the realm of presidential power, for the constitution does not grant the President direct power to increase the nation’s size.

They would see this act as merely Jefferson forgoing his principles in an attempt to gain more land. However, this is not the case. Jefferson had not obtained this land by means of war and bloodshed, an achievement in itself. The land was acquired in a contractual agreement amongst two parties. A contract is a treaty, these terms are synonymous. The constitution allows the president to negotiate treaties with other nations (U.S. Constitution, Art. II, §2). In fact, the original document used in manifesting this purchase plainly dawns the term, “Treaty” at the very top. Thus, Jefferson was able to double the size of the growing nation democratically, and within the means of his presidential authority.

Thomas Jefferson was a slaveholder. This fact is known to many historians. But to label him a hypocrite for this fact without recognizing the underlying issues would be unjust. The words “All men created equal” bled from Jefferson’s pen, and it was a principle that Jefferson truly believed in. Upon forging rough drafts of the Declaration of Independence, Jefferson adamantly expresses slavery as “a cruel war against human nature itself” (The Rough Draft Of The Declaration Of Independence). These words would have remained upon the final draft of the Declaration, had the southern states of Georgia and South Carolina approved. Yet these states greatly depended on slavery for financial reasons, and demanded the removal of these lines (Ford). Jefferson wrote a book entitled, “Notes on the State of Virginia” in which he condemns slavery by declaring that the practice is “an abominable crime”.

The reason Jefferson had chosen to follow the path of a slave-holder is simple. He needed economic security. Jefferson had been in debt most of his life, and he relied on his slaves for his, and the country’s, fiscal well-being. The fact that Jefferson chose to practice slavery for his own financial reasons may appear selfish, yet if we convert his decision to decisions made by modern day society, we will see he shared similarities with the average American. For example, many Americans would agree that polluting the air and environment is wrong. Yet everyday millions of Americans contribute to pollution by simply driving their gas-powered automobiles. Americans rely on their vehicles for transportation to and from their paying jobs. Thus, modern day Americans are very much fiscally dependent on their vehicles, just as Jefferson- era Americans were fiscally dependent upon their slaves.

Therefore, Thomas Jefferson is an influential man who greatly contributed to the progression of America. His actions, although contradicting to his personal beliefs, were done so with the intention of seeing America prosper. Jefferson was chosen to lead the country into a successful future, and this goal could not be achieved if Jefferson had allowed his personal beliefs to conflict with the overall well-being of the country. To turn down the Louisiana Purchase, a transaction that doubled the size of the nation without spilling a single drop of blood, would be senseless. To abolish slavery at that time would forfeit America’s means towards economic stimulation and America would surely crumble without a mode to provide economic stability.

To cancel the national bank would prove ill conceived, due to its positive effects and overall success. Jefferson’s actions swayed from his beliefs, which can be considered hypocrisy by definition. Yet, Jefferson’s decisions all had beneficial purpose, and to label him as merely a hypocrite would be unfair. It is easy to condemn his actions given today’s mindset, but one must be aware of the cultural differences that are forged by distant time periods. Without his actions, America would never have achieved a prosperous future. In today’s era, equality can be achieved with much greater ease. We no longer have to look towards human ownership for fiscal security. Now, we must look towards Jefferson’s words of freedom and equality to help insure domestic tranquility; Jefferson’s core objective. We can attribute America’s present day equality to Jefferson’s beliefs and so he should be remembered as an American hero. 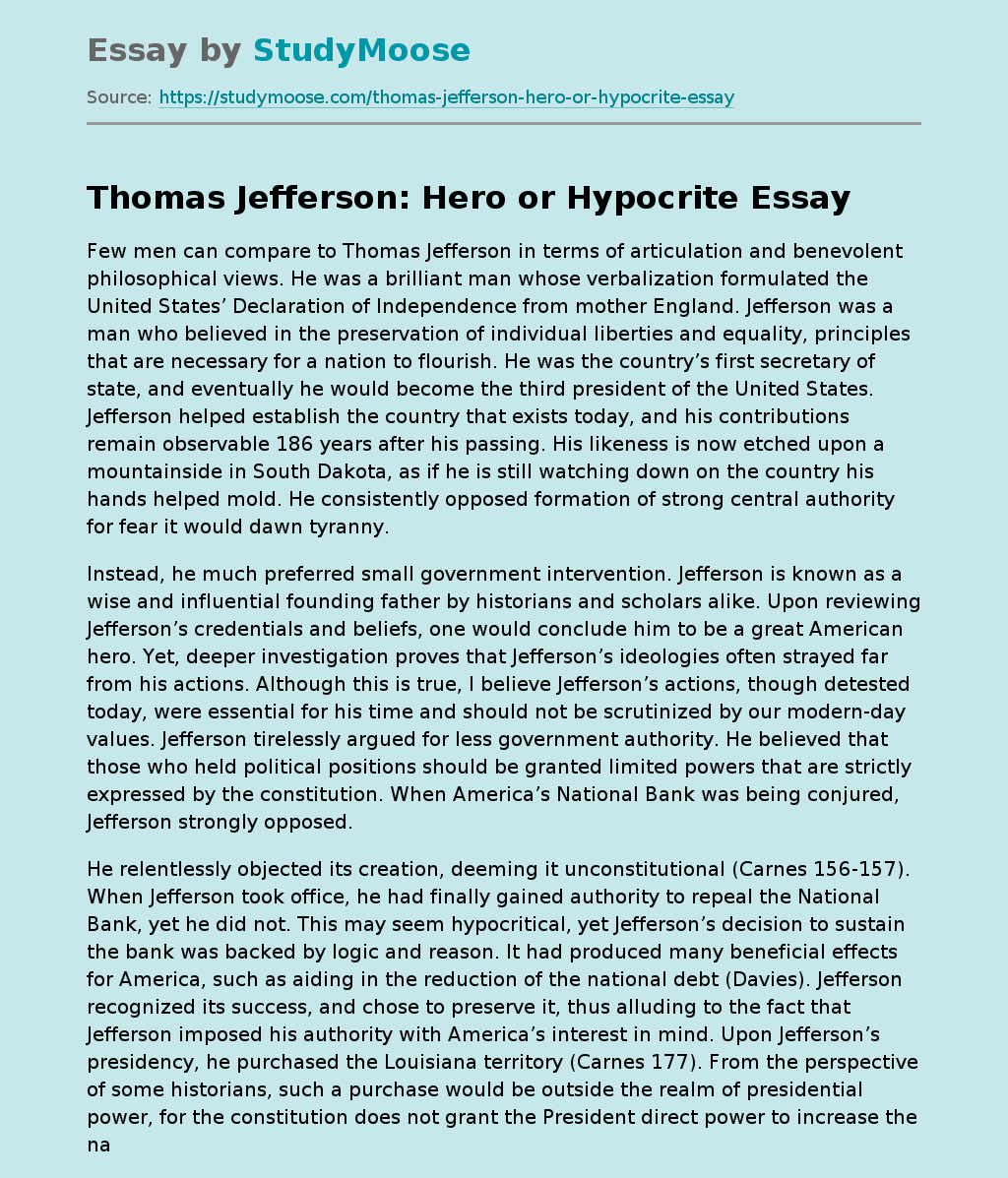