The similarities between Thomas Jefferson and Vladimir Lenin were so close in that both of them lived in a pivotal period when their respective nations were still at the stage of being shaped as nations. Both of them were pioneers, and therefore, crucial to anybody’s understanding of America’s and Russia’s history. While Thomas Jefferson was the third president of the United States of America, Vladimir Lenin was the first leader of Union of Soviet Socialist Republics (USSR).

At that, obviously, both were positioned strategically at the early stage of their respective nation’s development (Microsoft ® Encarta ® 2006).

Don't use plagiarized sources. Get your custom essay on
“ Thomas Jefferson and Vladimir Lenin: A Comparative Study ”
Get custom paper
NEW! smart matching with writer

This paper is a comparison of Thomas Jefferson’s and Vladimir Lenin’s leadership styles, and the consequent achievements that both of them have accomplished. Discussion A. Vladimir Lenin (1870-1924). Among the reputations for which Lenin is viewed by historians, as well as by students today, are his distinctions such as a revolutionary leader, a theorist, and as the first to chair both the first government of Soviet Russia and afterwards the Union of Soviet Socialist Republics (USSR).

In his early years, Lenin was deeply influenced by his older brother Alexander Ulyanov, a member of the People’s Will (a leftist group highly critical of Tsarism) who was executed for his involvement in the plot to assassinate Tsar Alexander III. After the death of his brother, Lenin started to engage in pursuing politics and eventually studied law at Kazan University and St. Petersburg.

After finishing law in 1893, he sustained his engagement in politics and went to Switzerland, and there met renowned figures such as George Plekhanov, Pavel Axelrod, Vera Zasulich and Lev Deich, some of the key catalysts of the working class movement in Russia.

Joseph Stalin was also one of the early supporters of Lenin (http://www. spartacus. schoolnet. co. uk/LRUSlenin. htm). Others who shaped Lenin’s political views were writer Nikolay Chernyshevsky (a Russian writer who wrote the book “What Is To Be Done?

, 1863), and the German philosopher Karl Marx (Das Kapital,1867 to 1895) whose ideas created such a profound effect on Lenin that, before long, he came to consider himself a Marxist (Microsoft Encarta Encyclopedia, Lenin, Vladimir llich, 2000). ~ Leadership and Achievements. It’s ironic to think that Lenin, whose early convictions were shaped by the belief that power must rest on people rather than on privileged few (the Tsars), became dictatorial when eventually came to power.

For example, in the summer of 1918, a brutal campaign was launched (called Red Terror) to eradicate opposition to his government. This campaign was aimed at the grassroots – the proletariat. Lenin also implemented a series of economic policies which is governed by socialist principles, his answer to Russia’s pressing needs. Some of the features of the program was the government’s taking over of Russia’s agriculture from the peasantry, and the seizing of factories making it state run, subjecting all workers to rigid discipline (Microsoft Encarta Encyclopedia, Lenin, Vladimir llich, 2000).

In spite of the fact that Lenin’s leadership was characterized by ruthlessness and cruelty, his role as Russian leader was crucial to the abolishment of Tsarism in Russia. He was indeed a revolutionary who paved the way for a more open minded Russia. Near his death, he regretted what Russia had become, particularly the dictatorial nature of its government and its bureaucracy (Microsoft Encarta Encyclopedia, Lenin, Vladimir llich, 2000). B. Thomas Jefferson (1743-1826). Contrary to Lenin’s dictatorial leadership, Thomas Jefferson’s style was democratic.

When he was forging the famous Declaration of Independence, he was supposed to have included to it a clause which would criticize the monarch for slavery’s entrance to America’s landscape. He was, however, deterred for doing so when the slave owning class requested for its reconsideration (______ “3 Major Achievements pf Thomas Jefferson”). ~ Achievements. Thomas Jefferson has many remarkable contributions but none of them has a far-reaching and broad influence as the famed Declaration of Independence.

Abraham Lincoln’s equally famous Gettysburg Address was itself influenced heavily by Jefferson’s Declaration of Independence (amazon. com). Nations around the world when defining freedom often refer to Jefferson’s Independence. Primary on his achievements are three which he himself requested to be put on the epitaph of his tombstone. They are: 1. ) the Declaration of Independence, 2. ) The statute of Religious Freedom in Virginia, and 3. ) The Founding of the University of Virginia. Conclusion

Thomas Jefferson’s achievements are still felt these days. In fact, when people try to define freedom nowadays, they often define it in terms of the First Amendment. Issues such as the boundaries of religion and the control of state in many nations are constantly clarified with the help of his statutes. It seems that he captured the essence of freedom among individuals in the Declaration of Independence. Also, his statutes on religious freedom are helpful in meting out fairness to people of different persuasions.

Because equality of all religions is secured, no religious bigots can dominate other groups. Both Jefferson and Lenin have their lasting legacies on their respective nations. Anybody today can draw many valuable lessons in terms of politics, religion, law, and freedom from both Lenin and Jefferson. 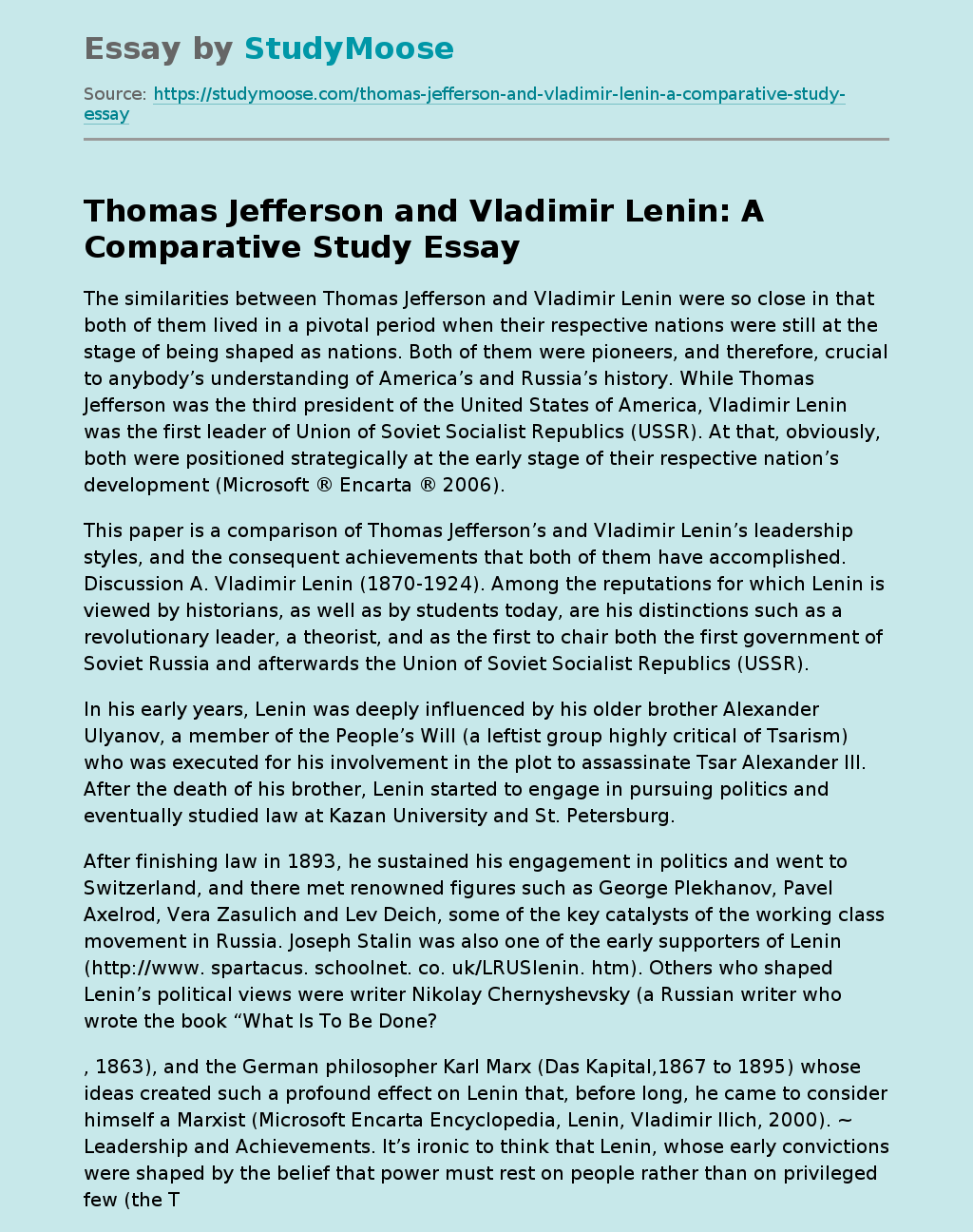