The general consensus among historians is that there was a difference of opinions between Thomas Jefferson and James Madison on the policies of the interpretation of the Constitution. It is generally believed that Thomas Jefferson felt that there should be strict and inflexible interpretation of the Constitution, while James Madison felt that the Constitution was elastic and that many different laws could be derived form a single clause. Their views, however, seemed to have switched over the period of 1801-1817 to fit the needs of the time, and so those beliefs were not really set in stone.

Don't use plagiarized sources. Get your custom essay on
“ Thomas Jefferson and James Madison’s views ”
Get custom paper
NEW! smart matching with writer

An example of how he was a strict constructionist was in 1808 (in the middle of his presidency), when he created the phrase “separation between church and state.” He felt that the Constitution does not provide the National Government with the right to impose religious laws upon the citizens (it can only make civil laws), and therefore those types of decisions are for the people to make for themselves (Doc. B).

Towards the end of Jefferson’s presidency was when the Federalists really lost their power and when the Democratic-Republicans increased theirs.

With the loss of power of his party, James Madison changed his opinion of flexible interpretation to strict, while Jefferson did the opposite. They switched opinions because each believed that, with the changing times, their new views would be more effective in governing. In 1814, a Federalist expressed this change when he felt that the broad use of phrases in the Constitution could become dangerous because the stretching of a clause so much that a new law could be created was unfair to the people (this law was the right of the government to draft soldiers to the military) (Doc. D). In 1815, the Federalists again showed their change of opinion.

At the Hartford Convention after the War of 1812, the Federalists wrote how it was not good for it to be so easy to create a law like they used to, so they made amendments harder to achieve (state representatives have to vote in Congress, etc.) (Doc. E). In 1817, James Madison expressed that he would have liked to have roads and canals built so that there could be better trade routes, however, he refused to give his signature because he was complying with the text of the Constitution, which gave that right only to the state government (Doc. H). At around the same time (in 1816), Thomas Jefferson believed that the Constitution is a living document that can and should have changes made (but no unnecessary changes) to fit the needs of the people of whatever time period it is (Doc. G), whereas in the beginning of his presidency, he was a strict constructionist.

The characterization of Thomas Jefferson and the Republicans as strict constructionists and James Madison and the Federalists as broad interpreters was true, but not for the entire sixteen years between 1801 and 1817. In the beginning of Jefferson’s presidency, each had those views. Towards the end of it, however, their beliefs switched, and this was evident in the way that Jefferson ended up believing that change was good and how Madison refused to stray from the powers given to the Federal Government by the Constitution. 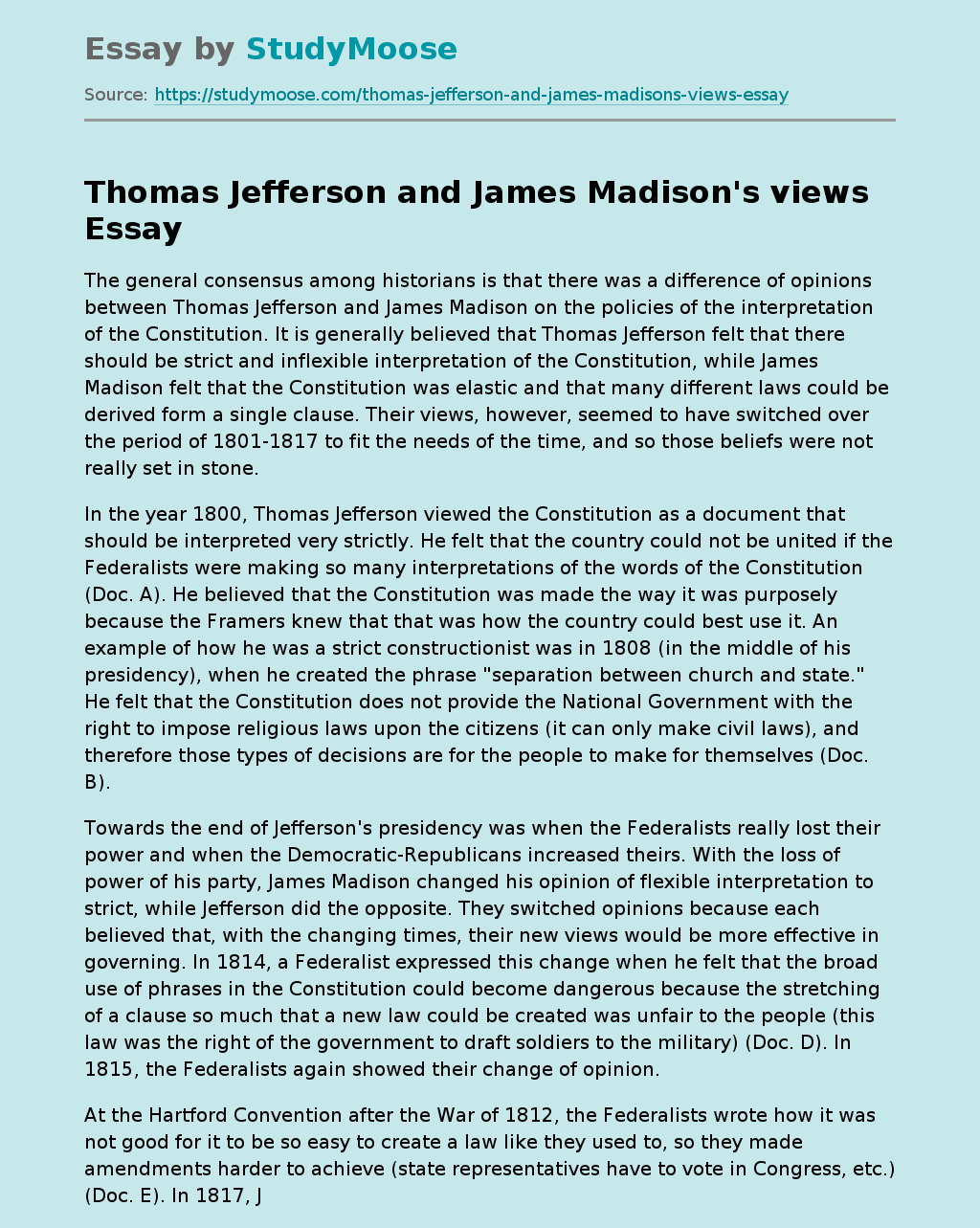