1.What are the work styles of Thomas Green and Frank Davis?

Frank Davis is a micromanager wanting to know the exact details of his employees whereas Thomas Green is more liberal and believes in doing his work efficiently and effectively.

Thomas Green does not agree with his boss Frank Davis and his expectation of double digit growth which he expresses openly in a meeting. This take in Davis for a surprise as he expects his employees not to challenge him.

Don't use plagiarized sources. Get your custom essay on
“ Thomas Green Case ”
Get custom paper
NEW! smart matching with writer

He also feels that Green lacks the enthusiasm which his job demands.

3.What is your analysis of Thomas Green’s actions and job performance in his first five months?

I feel Thomas Green has done an average job in the first five months. As per my suggestion, he shouldn’t have been vocal about his disagreement especially with his boss. He should have taken his time to settle down and made good relationships initially.

4.What are the possible underlying agendas of Davis and McDonald?

Davis: wants to get rid of Green maybe because he wasn’t his choice in the first place. McDonald: wanted an insider in Davis‘s office, also since Green and he came from the same town and school, probably he was a little biased towards him.

Infosys went through a huge employee turnover in early 2000’s. The problems were due to a mismatch between Management’s strategy towards employees and employees’ expectation from the company.

Though Infosys recognized that an employee would only be as committed to the firm as the firm was committed to its employees and it attempted to demonstrate its own commitment in a number of ways. Still, employee discontent was on the rise. With the company’s rapid growth and its number of employees skyrocketing, the disparity of expectations across the employee hierarchy had become very complex. For example, Infoscions received employee stock options at a purchase price of 5% of the fair market value. Coming from modest middle-class upbringings, most of them reaped rewards beyond their wildest imaginations.

The next generations of Infoscions had similar expectations but were sorely disappointed when the SEBI (the Indian equivalent of the SEC) required Infosys to issue future ESOPs at 85% of fair market price. There were two other troubling factors with the company’s growing size: (1) As Infosys became more process-oriented and started leveraging its experience to perform repeatable projects, employees realized that they were being deprived of the creative and technical ingenuity that had been inherent in their work during the initial years. (2) Employees thought the organization were becoming more impersonal and some of the perks of the initial years were being repealed. It was well known that the founders of Infosys had strongly articulated values and tried to practice them during every interaction. As the company started scaling up across multiple locations, Infosys articulated the core values it believed in and wanted every employee to adhere to through the acronym “C-LIFE”: Customer delight, Leadership by example, Integrity & Transparency, Fairness, and Pursuit of Excellence.

But the execution of C-LIFE remained a challenge across the organization. To maintain the company’s value system, it tried to recruit and hire employees based on their potential fit with the company’s culture and values. But this became a challenge, as Infosys did not want to be constrained by lack of resources in its pursuit of growth. Infosys realized the benefits of introducing employees to the Infosys culture right from the start and consequently, had developed an extensive and detailed induction process. In spite of these initiatives, Infosys was facing challenges resulting from its continuing growth. With each passing year, the diversity and disparity of the employee hierarchy was becoming more apparent. Middle managers and senior managers were not in touch with the rapidly changing realities of employees at lower levels. These managers could not understand the frustrations of employees who were doing less interesting work than the managers and had not been richly rewarded by Infosys.

Managers also found it hard to practice a very hands-on management approach and struggled to delegate effectively as their responsibilities expanded. Hence, as an almost paradoxical state of affairs, Infosys had to deal with increased employee turnover in the same era in which it was expanding operations. The organizational growth led numerous employees to reflect and realize that work was not as fulfilling as they had hoped. This was simultaneous with the entry of multinational technology firms into India. These firms attracted talent from Infosys and Wipro because of their global brand and better compensation packages. 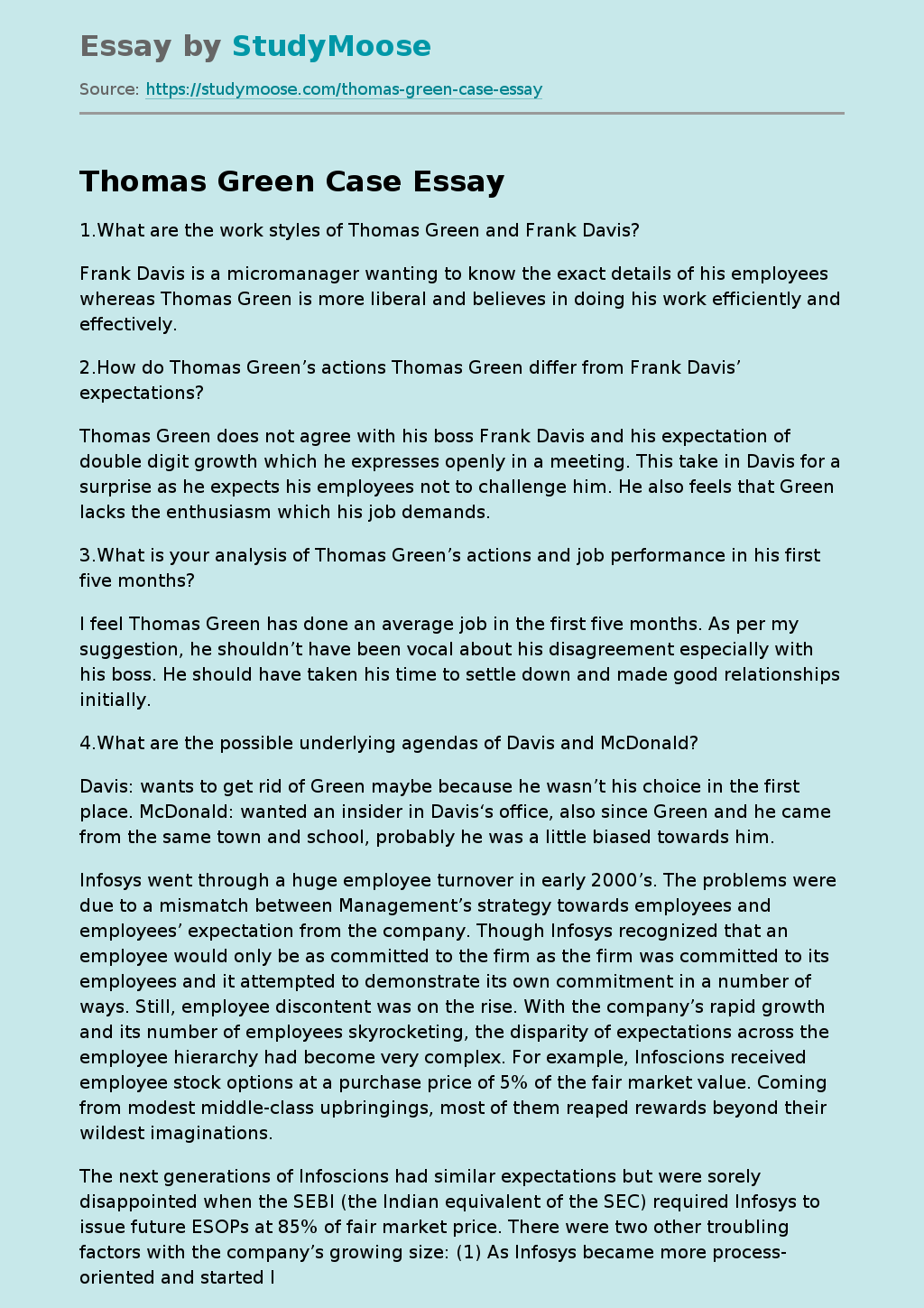