Describe the work styles and personalities of Thomas Green and Frank Davis. Thomas Green: He was a man of words, who could charm anyone with the way who spoke. Which also meant that he was an excellent salesman who could sell the products well. He was an aggressive and an ambitious person. However when it came to work he didn’t like to provide the clients any data backing his ideas. He just expected the clients to trust him on his word.

Don't use plagiarized sources. Get your custom essay on
“ Thomas Green and Frank Davis ”
Get custom paper
NEW! smart matching with writer

He felt that preparing presentations, charts and any data sheets were all too fancy. For him obtaining clients was more important than documenting data or anything else. He acted spontaneously. Frank Davis: He was a person who expected things to be done methodically. He was a kind of person who would be well prepared for meetings and who would have sufficient data backing up his talk and he expected the same from others. He focused extensively on the growth of the company.

He was the type who wanted all the work done to be well documented and to be delivered on time. He didn’t like his employees to show negative attitude in the meetings or anywhere in the office. Frank seemed to have had some reservations about Green getting that promotion. Davis wanted things to be done in a planned manner. He did recognize the strengths of his employees at the same time he wanted to them to focus on the areas they fell short.

What is you analysis of Green’s actions and job performance in his first five months? What mistakes has he made? Green clearly lacked any managerial experience.

Although Green had unique insights into the market, failed to understand the importance of providing sufficient data to his clients along with his ideas he. He didn’t yet come to terms with the fact that he was not just a sales person anymore. His first priority was work. Despite of working hard he couldn’t convey the same that he was doing to the management due to the lack of communication from his side. He needed to coordinate with several layers of corporate management. He failed to take McDonald’s advice to compensate his lack of experience by taking guidance from more seasoned managers. He. Instead of trying to achieve the goals set by Davis, he had already given upon it saying that they were impossible to achieve. He shouldn’t have spoken ill about his superiors to his colleagues. He should follow-up with information when it is required of him. Green shouldn’t have disagreed in the meeting with Davis.

He should have politely discussed his concerns elsewhere and should have listened to the reason why Davis set up such goals without commenting on them first. Instead of just relying on meeting people and making sales directly, Green should have developed new strategies and techniques to make the sales. Green created a hostile situation between himself and Davis, so much so that he began avoiding Davis, which was not a wise thing to do at all. Green’s working style had become unprofessional to say the least. When Green says that all excitement has been gone from his work it shows the kind of resentment he held for this job, which is not at all good. Green had worked in a very one-dimensional manner. He focused only on some aspects of work but not on all.

3. What are the possible underlying agendas of Davis and McDonald? Davis clearly wants work to be done in a certain manner. He wanted Green to conform to those ways. He wanted to know every thing that was going on with Green’s work. Since Davis also held the job of a sales representative he could understand how Green was thinking in terms of making the numbers. He had advised Green but when he could see that it made little difference to his working style, he thought it would be best to let go of Green if he didn’t mend his ways. All Davis wants is for Green to be positive in the work environment and create strategic marketing approaches without sticking to the same old face-to-face. He wanted Davis to work in a dynamic fashion. McDonald has no clue as to what is going on with Thomas Green. All she knows is the version of what Davis had been informing her. Since she knows only one side of the story she must be disappointed with Green since she had expected a lot from him. She had asked him give a written statement to hear his perspective. However all she wants is for both Davis and Green to come out of this situation. She wants Green to work well so that he might prove to be an asset to the company.

Consider the article “Managing Your Boss.” What would you recommend to Green based upon this article? Thomas Green must firstly set up a meeting with McDonald and explain to her his side of the whole story. He must convince her that he would do a much better job and continue to work for this company. Any office has its own politics, how you manage makes the difference. Green must start conforming to the ways of Dynamics Display. He must be a team player and must stop working individually. He must focus on not just selling the product, but also provide sufficient data to his clients. He must respond to Davis in a timely manner. He must also document all his work so that his management is up-to-date with his work. Green must also work hard to develop a relationship with Davis. He must begin to understand his role completely and realize his responsibilities. If he has an issue with something he should make the management see his perspective instead of avoiding the whole thing. 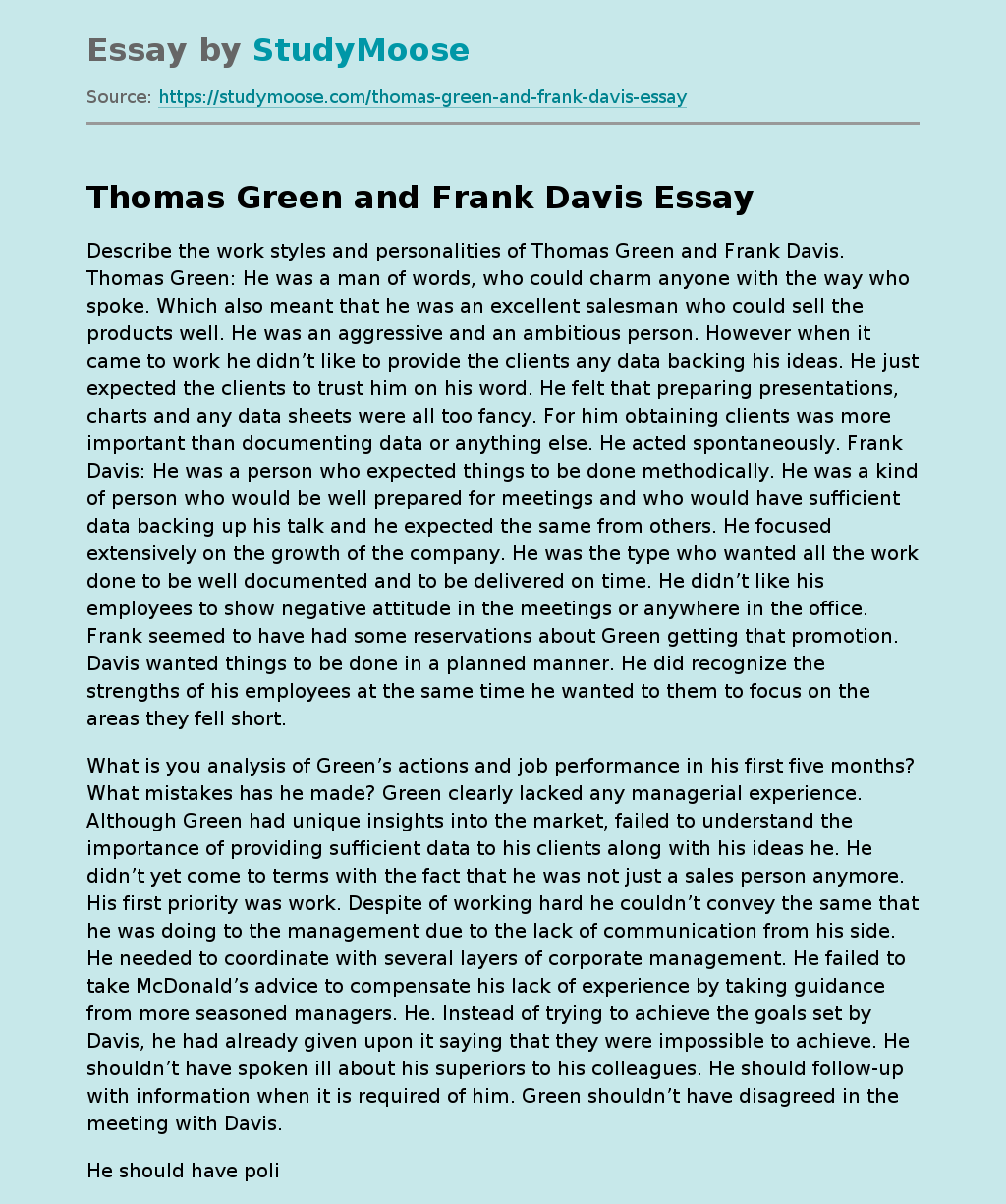