This Is What It Means to Say Phoenix, Arizona

In the short story, “This is What It Means to Say Phoenix, Arizona”, by Sherman Alexie, I looked at two characters: Thomas and Victor. Thomas Builds-the-Fire is a storyteller on a reservation who everyone ignores because they think he is crazy. Victor on the other hand is a guy who would not dare be seen talking to Thomas. Thomas knows that Victor is in need of help, but Victor will not admit it. I want to show how these two characters who are completely opposite of each other, come together during a time of need.

Don't use plagiarized sources.
Get Your Custom Essay on This Is What It Means to Say Phoenix, Arizona Just from $13,9/Page

Victor’s father has passed away and he needs to get to Phoenix, Arizona to retrieve his remains and other valuables that his father left behind. Victor asked his tribe for help but with limited funds the tribe already has they are unable to fully help him. Thomas sees that Victor does not have enough money to get him to and from Phoenix so he offers to help Victor as long as he takes him with him.

Thomas Builds-the-Fire knew he had to help Victor; he spoke of how the wind told him stories of Victor’s father, how his father was not a strong man, that his father’s heart was weak, and how his father wanted to run away and hide.

Throughout most of his adult life Victor mistreated Thomas. Memories of the two of them as kids clouded his memory from time to time when they spend time together traveling back to their reservation from Phoenix. As kids they played together but as Victor grew older he began to be like everyone else on the reservation and started ignoring Thomas. Victor beat Thomas as a teenager when he was really drunk and may have easily killed him if it were not for some lady to come and break them up.

Thomas knows that Victor had mistreated him in the past but was still willing to be there for him when his father passed. Thomas told Victor that Victor’s father was giving him messages in his dreams he said, “Your dad was my vision. Take care of each other is what my dreams were saying. Take care of each other. ” (Alexie P. 516) Thomas seems to have a gift in his storytelling, they may seem like crazy stories he tells over and over but his stories may carry some kind of meaning. “We are all given one thing by which our lives are measured, one determination.

Mine are the stories which can change or not change the world. ” (Alexie P. 518) His stories about Victor’s father are why he went out of his way to help Victor. It took Victor a trip to Phoenix to see that Thomas was there for a reason, to help him because they were cousins. When they returned back to the reservation, Victor knew that he still could not be seen talking to Thomas for fear of being ridiculed for talking to the crazy storyteller. “Victor knew that he couldn’t really be friends with Thomas, even after all that had happened.

It was cruel but it was real. ” (Alexie P. 518) Victor in a way was thankful for Thomas’ help but seemed too proud to admit it to Thomas. Victor knows that Thomas would remain the crazy storyteller. In a way Victor felt ashamed of himself. Thomas on the other hand was ok with knowing Victor would not talk to him again after their trip to Phoenix. “I know you ain’t going to treat me any better than you did before. I know your friends would give you too much shit about it. ” (Alexie P. 18) He asked of Victor one favor only, he said, “Just one time when I’m telling a story somewhere, why don’t you stop and listen? Just once! ” (Alexie P. 519) In the end of the story, all Victor wanted was a fair trade, to return what Thomas had helped him with. Thomas didn’t want Victor to pay him back in any way; he just wanted Victor to acknowledge him the next time he sees him somewhere telling one of his stories. So Thomas went about his daily life on the reservation telling his stories over and over, to the cars and dogs, and listened for new stories the wind and trees.

This Is What It Means to Say Phoenix, Arizona. (2016, Oct 28). Retrieved from https://studymoose.com/this-is-what-it-means-to-say-phoenix-arizona-essay 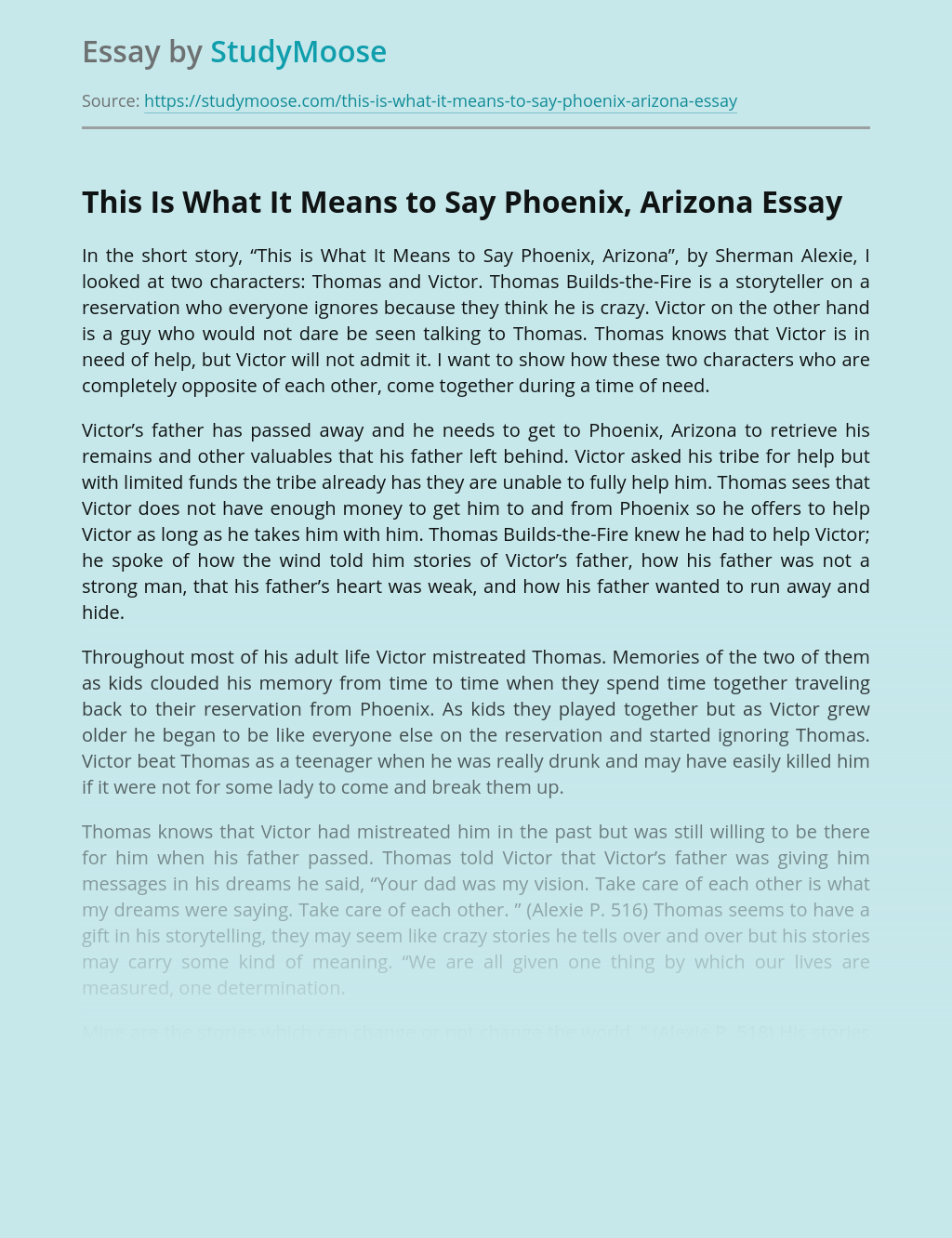 One of the Main Messages in “a Christmas Carol” Is That Love Elevates and Money Corrupts. Discuss.

ONE OF THE MAIN MESSAGES IN “A CHRISTMAS CAROL” IS THAT LOVE ELEVATES AND MONEY CORRUPTS. DISCUSS. The allegory of Charles Dickens’ “A Christmas Carol” can be shaped by a variety of different outlooks. Dickens incites the reader by including a riddle of messages, some messages may be more imperative than others. One of the...

View sample
Why People Love the Villain: A Synthesis Essay

The Joker, Batman’s nemesis, is far from a golden example of good. In reality, he’s more of a madman out to see the world burn as he triggers chaos, which he calls “justice”. And although he is wicked and madness incarnate, there’s still a place for him in people’s minds under the classification of amazing....

View sample
Get Essay
Of Mice and Men Book Report

In the book “Of Mice & Men” the two main characters are George and Lennie. The setting of the story seems to be set back in the early 1900’s or the late 1800’s by the dialect they use. The two characters have a unique relationship. The first character is a small quick man with strong...

The Canonization by John Donne Love is true and pure, a magnificent experience, a way to live more and to surpass even death. It is a sublime dream that is real and better than the material world. Love is life’s paradox. This is the idea that John Donne is revealing in the poem The Canonization....

There are many instances in which William Shakespeare shapes our modern works of art and literature, doing so by remaining the most spoken playwright of his century. Besides his many privileges, he had used some literary elements that have great discussion in the present day, such as his usage of irony, foreshadowing, unconscious hypocrisy and...