Thinking as a hobby

Are there really three different levels of thinking? One could argue that there are five levels or another could argue that there is only one. In William Golding’s narrative, “Thinking as a hobby”, Golding illustrates his three levels of thinking and justifies why grade one thinkers are superior when compared to grade 2 and 3 thinking. In “Thinking as a Hobby” written by William Golding, Golding presents to the reader about how a grade 3 thinker thinks like through a flashback to his children years.

Don't use plagiarized sources. Get your custom essay on
“ Thinking as a hobby ”
Get custom paper
NEW! smart matching with writer

In his flashback or anecdote to his childish years, Golding found everything incomprehensible and even found Rodin’s thinker confusing. (3) This shows that in his juvenile years he was very unintelligent and thought “on the surface” like a grade three thinker. In order to present how a grade three thinker thinks the author, William Golding uses imagery in order describe that we are surrounded by grade three thinkers all the time. “We had better respect them, for we are outnumbered and surrounded.

A crowd of grade­three thinkers, all shouting the same thing”(27)

“The portentous Thinker I placed on the edge of the cupboard so that he looked down at the bath towel and waited for it to slip” (32) Grade 2 thinking, is about the feeling rather than thought (26) Raviraj Golding also describes grade two thinkers as having to deal with many contradictions and he accomplishes this through irony. “Grade two thinking is withdrawal with eyes and ears open” (28)

Although he encountered grade two thinking in his teenage years it can last even when one is still an adult.”Mr.Houghton was not the only one with an irresistible spring in his neck” (29) which is why Golding describes grade two thinking as dangerous. As Golding entered into his adult ages he reaches even higher thinking, grade one thinking. Although one might like to have a rendezvous with grade one thinking, Golding describes it as not as much exciting as he expected it to be. He described it to be very lonely and solitary. “I dropped my hobby and turned professional”(44) This shows the how serious one has to be in order to accomplish the grade one thinking.

“But I would put the thinker sunk in his desperate thought where the shadows before him ­ and at his back” (45) Golding also describes grade one thinkers isolated and in deep thought. In order to portray impactfulness in grade one thinkers Golding uses imagery and diction. Nevertheless grade one thinkers are armed with the greatest minds and have the power to change the world with a blink of an eye, just like a superhero. A grade three thinker, surface thinkers. grade two thinkers, tend to have a lot of controversy. However, a grade one thinker independent, go in deep and are superior. This proves that there are really three grades of thinking and one should strive to become a grade one thinker.

Thinking as a hobby. (2016, Aug 14). Retrieved from https://studymoose.com/thinking-as-a-hobby-essay 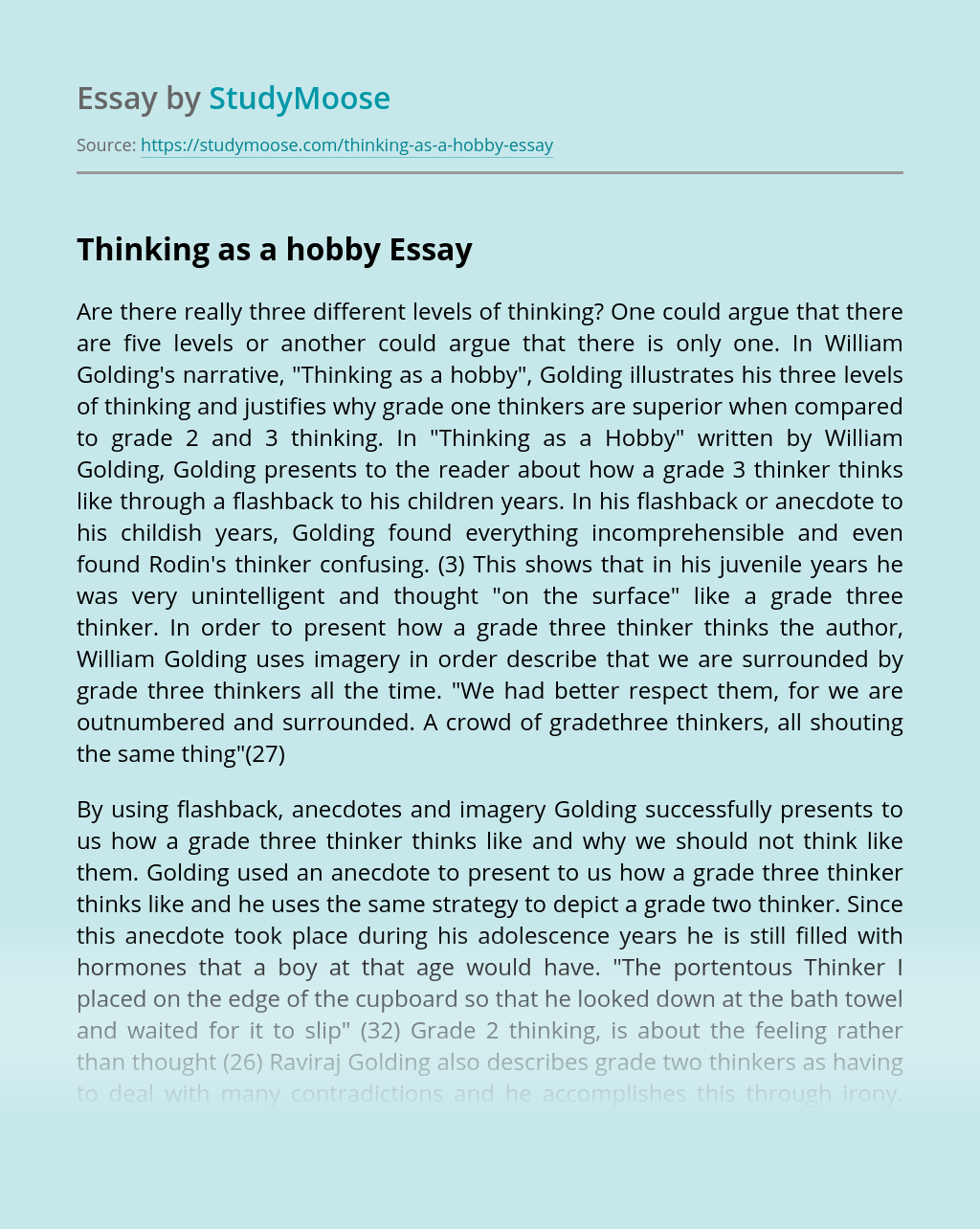