According to Napoleon Hill, the author of Think and Grow Rich, “Anything the mind can conceive and believe, the mind can achieve” (Hill 1). The book was written in 1937 at the request of Andrew Carnegie, after Hill spent 25 years researching the secret to success in life and business. Since then more than seven million copies of the book have been sold, and those who apply the “secret” inside, regardless of their background, education, social status, handicaps, or circumstances always succeed. To prove this, Hill interviewed more than 500 successful Americans and has passed on what he calls “Carnegie’s secret” in the book Think and Grow Rich.

Don't use plagiarized sources. Get your custom essay on
“ Think and Grow Rich by Napoleon Hill ”
Get custom paper
NEW! smart matching with writer

The secret Hill shares is a simple one that can be applied to anyone and anything considered a failure by others–or even oneself. In his research he interviewed such great men as Andrew Carnegie, Henry Ford, Theodore Roosevelt, Wilbur Wright, and Thomas Edison–who only had three months of schooling in his entire life. These men all had two things in common: They all went from being very poor to extremely successful, and each of them used Andrew Carnegie’s secret formula for success.

Even Hill himself used what he calls “The 13 Proven Steps to Riches.” These steps are as applicable today as they were in 1937, and anyone can use them to obtain whatever he or she wants in life and business.

The first step in the formula involves forming a club with which to practice the Mastermind Principle (Hill 5). The principle simply refers to having a group or friends, family, or others with a common interest, such as financial freedom, and meeting regularly to discuss and solve the problems they are facing.

Hill recommends that the group meet once a week, read a chapter of his book beforehand and again during the meeting, and then discuss the chapter as it applies to each member personally. In this way, members can make notes and form their own plan for success.

Next, it is essential to recognize that it is not a person’s resources, money, expertise, appearance, etc, that promotes success. It is not even what he or she says. Instead, the most important things are what each person thinks and how much he or she desires something. For instance, Edwin C. Barnes wanted to work with Thomas Edison, and not even the fact that he had no money or had never met the great inventor discouraged him. Barnes was so persistent that he traveled to Edison’s laboratory on a freight train. When Edison saw his shabby appearance and how young he was, he thought nothing of Edwin Barnes.

However, Edison saw something in Barnes’s face that made him give him the opportunity to work with him. Edison said: “I gave him the opportunity he asked for, because I saw he had made up his mind to stand by until he succeeded.” And Edwin did indeed succeed. He did not become Edison’s business partner immediately, but he did work for the inventor. Eventually, because Barnes was ready and remained ready, his desire was fulfilled. Therefore, persistence and a truly burning desire are necessities for success. Furthermore, Edison said it was not what Barnes said, but instead what he thought, that made him listen to the young man and allow him to work with him (Hill 19). Confidence is key. Anyone who is persistent, confident, and sure of what he or she wants will succeed without a doubt.

Other essential qualities of successful people are demonstrated by Barnes as well. These include faith, the will to win, and initiative. Barnes did not give up, even though he had little education, no money, and no influence. When Edison created the ediphone, a dictation machine, no one was interested in selling it. Barnes, however, was certain he  could sell it, and he did, also receiving a contract with Edison for several million dollars (Hill 21).

Barnes had faith in himself and the will to succeed and do whatever he had to, in order to become Edison’s partner. He also took the initiative when Edison could not sell the machine to anyone else and did the job himself. Hill stresses the importance of faith, the will to win, and initiative throughout his book; each chapter contains the story of someone else who became successful because of his persistence, determination, and the simple thought that he would obtain nothing less than his deepest desire.

Many people quit just before the proverbial finish line. They experience temporary defeat and stop trying to achieve their goal. One example of this is R. U. Darby, who was a minor during the Gold Rush. Darby dug for weeks and weeks, because he was certain there was gold to be found on his claim. Finally, he could see the ore. His family and friends helped him purchase the machinery he needed to mine the ore, and Darby returned to his claim. When the first ore was mined, Darby found out that he had one of the richest mines in Colorado! But suddenly, they could no longer find the gold.

The vein seemed to have disappeared, and Darby was deeply in debt. As a result, he sold the machinery to a man who called in a mining expert. The expert drilled only a few feet from where Darby has been drilling, and the gold he mined produced several million dollars in profit. When Darby heard this, he realized he had quit just before he could have made his fortune (Hill 21-22)

. Later, Darby sold life insurance and was one of the most successful life insurance salesmen in the world. He said: “I stopped three feet from gold, but I will never stop because men say ‘no’ when I ask them to buy insurance” (Hill 22). As a result, Darby was one of very few men who sold more than one million dollars in life insurance each year. Therefore, another crucial quality for success is often braving temporary defeat, because success may be just around the corner.

Hill’s book is practical and down-to-earth. It contains lessons that can be applied to any aspect of life and business. The stories he provides to illustrate the essential qualities for success are extremely helpful for understanding the steps to succeeding in business. The stories are also entertaining and apply to people of all ages and backgrounds. Think and Grow Rich should be required reading for all students and professionals. 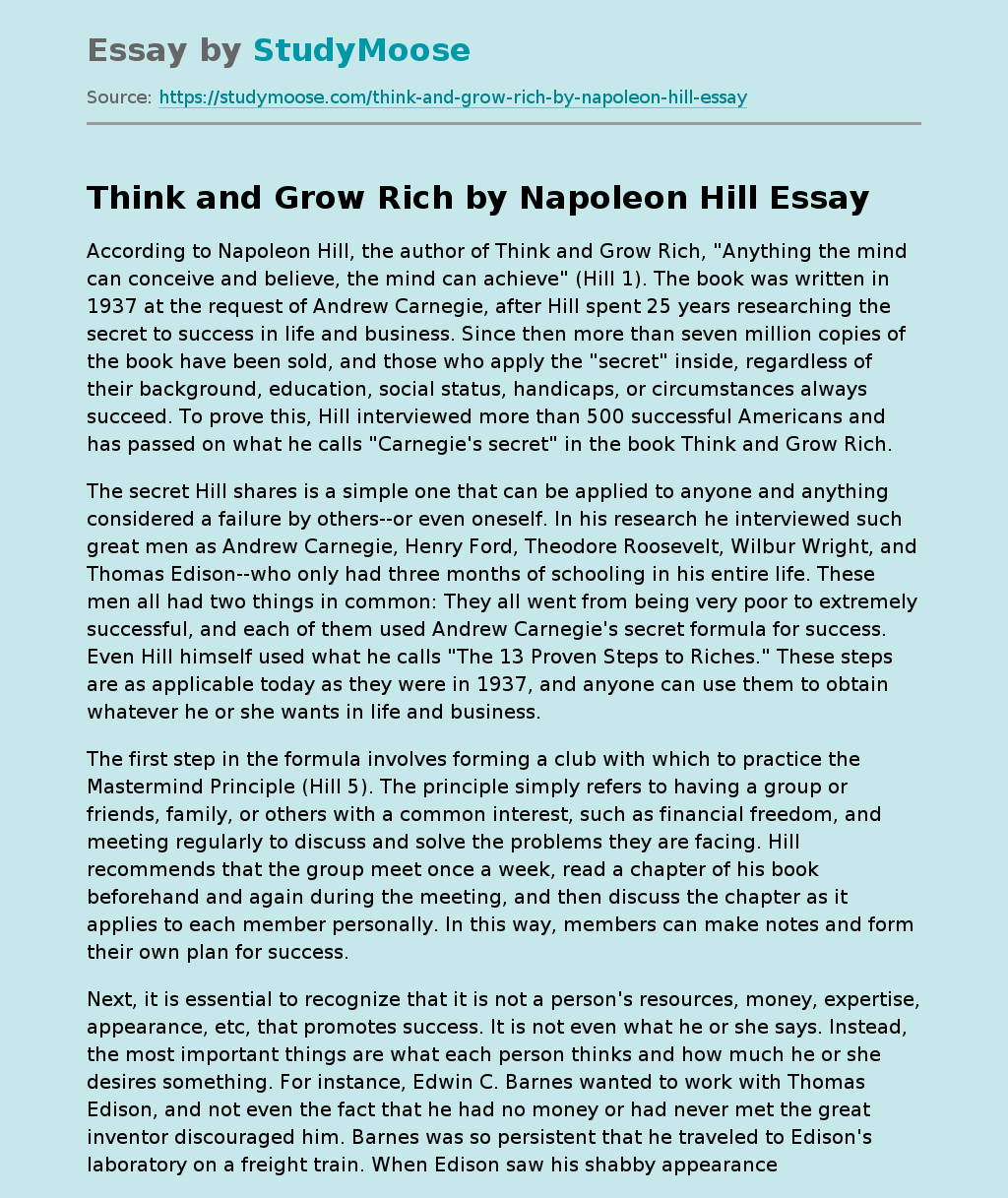