Imperialism- The policy of extending the rule of authority of an empire or nation over foreign countries; or of acquiring or holding colonies of independencies (Random House Western College Dictionary). In my view, imperialism is gaining control over foreign objects. Imperialism embodies superiority in three areas, cultural, social and economic domination. These tree areas are relevant in the play “I Will Marry When I Want” by Ngugi Wa Thiongo and Ngugi Womiri. The theme of the play is how imperialism affects a foreign country’s government, culture and society in negatively.

Don't use plagiarized sources. Get your custom essay on
“ Things Fall Apart by Chinua Achebe ”
Get custom paper
NEW! smart matching with writer

In this case, Europeans are the imperialists who acquired Kenyan’s territory. Wa Thiongo and Womiri used the characters to express this idea; three of the characters are Gicaamba, Kiguunda and Kioi. Gicaamba represents the social frustration the foreign objects face by the act of imperialism. Kiguunda displays the effect imperialism has on religion and culture. Kioi portrays the oppressor and the damage of economic domination. Gicaamba is a wise, mature, freedom fighter.

He makes the audience question Christianity by pointing out how not all Christians attend church and how come those who are wealthy and pass away are still prayed for at church. Gicaamba is also a factory worker, this way the audience relates to him; most Kenyans work at factories. His song in Act 1 illustrates the social frustration being caused by being over worked and the poverty that Kenyans faced. Their low wages are not enough money to make a living. This causes hunger and lack of health maintenance for families of Kenyans which leads to social frustration.

Establishing churches also annoys Kenyans because they don’t believe in the church. This violates the Kenyans’ traditions. Wa Thiongo and Womiri take us closer to the lives of Kenyans by introducing us to Kiguunda’s life. Kiguunda’s characteristics and events that occurred in his life deliberate the effect of imperialism in Kenyans’ culture. As we see, Kiguunda’s tribal traditions were affected; he converted to Christianity in Act 1, Scene 1. In his home, he kept a board with the inscription “Christ is the head,” He was also planning to remarry in the church; therefore he is following Christian regulations.

His beliefs were slowly being transformed and because of that the audience can relate to the Kenyans’ lifestyle. This illustrates what Europeans do to Kenyans’ families, they convinced them to convert to Christianity. Kioi represents the antagonist in the play because he is powerful and rich and convinces Kiguunda to put his one and a half acres of land in jeopardy by using it as collateral in the bank. One of the reasons why Kioi is wealthy is because he works with Europeans to make profit. This shows how Kenyans work against their own people.

Kioi’s actions and language represent economic domination, which is what missionaries are doing to Kenyans. He convinced Kiguunda to join the church, so he managed to convert Kiguunda and Kioi also acquired Kiguunda’s one and a half acres of land; leaving Kiguunda and his family economically unstable. This is an example of what colonizers are doing to Kenyans’ territories and worth. They have the country in poverty by controlling the wages and medical benefit of the workers. They also control the resources produced by owning large amounts of land.

Kioi and the colonizers have similar characteristics in which both take advantage of their workers by not paying fair wages. Kioi and the colonizers own most of the banks, hospitals, farms, and fields so they control what is done with that profit. Besides, they send most of the profit to Europe, leaving Kenyans’ economy low. Imperialism is clearly the message of “I Will Marry When I Want. ” Gicaamba, Kiguunda, and Kioi paint a clear picture of imperialism. Gicaamba represented social frustration in most of the Kenyans families.

Kiguunda represented the effect imperialism has in their culture and Kioi representing the oppressor. In my opinion, this play was utilized as a wakeup call for Kenyans. It deliberated information about what was being done by imperialists. This play is calling for action so Kenyans could rebel. I was not surprised why the play did not have a resolution, Kioi conquered Kiguunda’s land and nothing was done about it. In other words, Kenyans are letting Colonizers take over, and they will continue until someone decides to stop it. 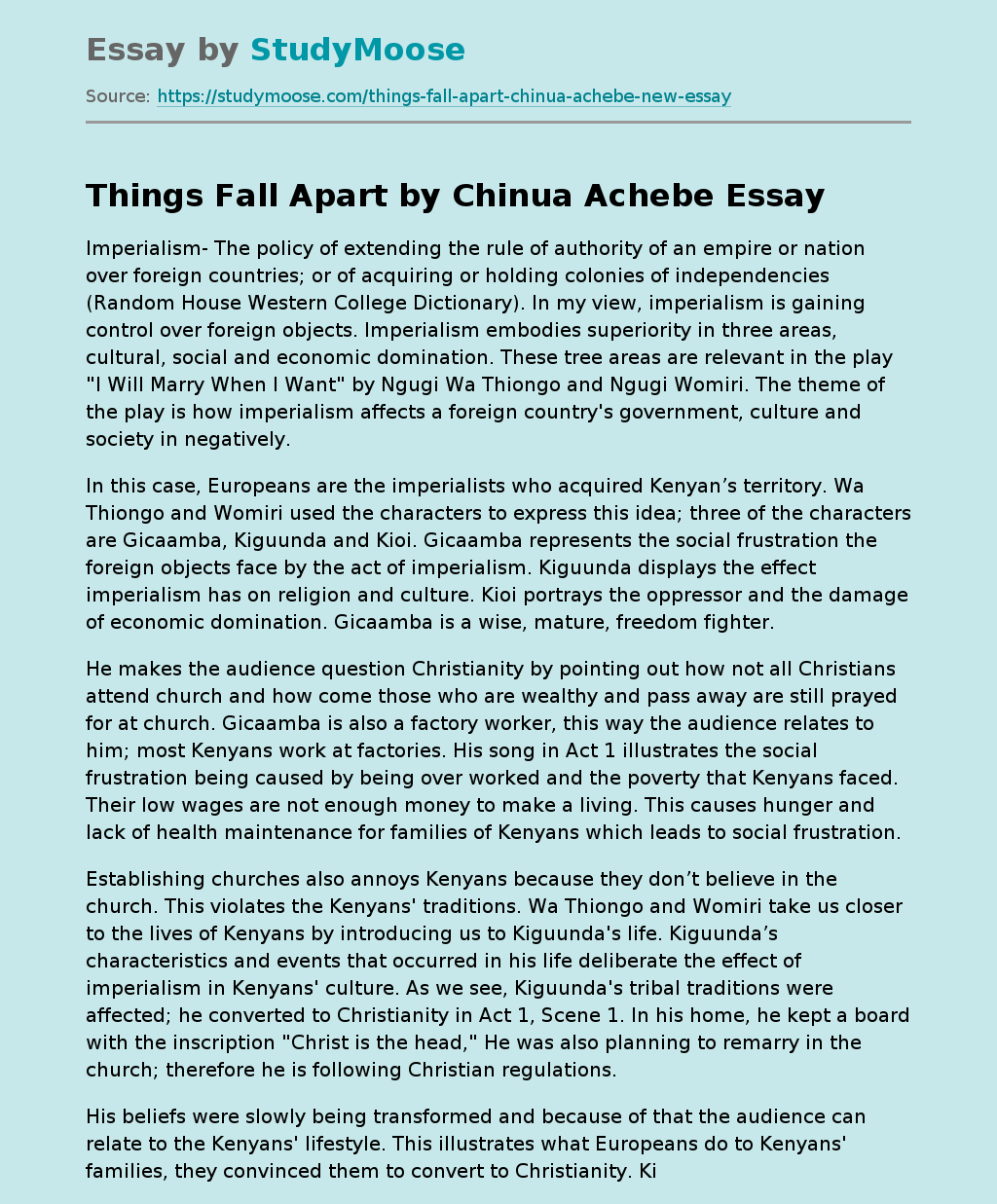