1) Switch on the Multimeter (which is connected to the Nichrome wire via the crocodile clips). Record the reading I get from the Multimeter and switch off the Multimeter. (This will save the battery, which will give me more accurate results. ) 2) Increase the length by 100mm until I reach 1000mm. This will give me a wide range of results to draw a graph.1) Repeat the whole experiment two more times making sure I use the same pieces of apparatus so nothing changes to make my experiment fair.

Don't use plagiarized sources. Get your custom essay on
“ Thickness of wire ”
Get custom paper
NEW! smart matching with writer

4) Take an average of the three sets of results (so that any anomalous results they will not show when I plot the averages on the graph).

5) Draw a graph and conclude the result that I have found. How I will ensure my measurements are as accurate as possible I will make sure my measurements of length are as accurate as possible by sellotaping down the Nichrome wire flat to a ruler. This will make my experiment accurate because it will ensure that I can accurately measure the length that I am going to increase it by.

The length by which I increase the crocodile clips must be accurate and precise because the investigation is about finding what affect wire length has on resistance.

How I will ensure my investigation is as fair possible 1) In my experiment I used a multimeter so the voltage in the circuit stayed the same at 9V. This means that throughout all of my experiment the voltage will be the same so that it will be fair.

2) The voltage in the circuit will stay the same and so will the current. This is because the battery, which is 9V, is controlled by the multimeter. The current is low which is good because this will not significantly heat the wire, so the results would be accurate. I will have to keep the voltage low to minimise resistance.

“This is due to kinetic theory, the more voltage, the hotter the wire, the spaces in the wire are less due to the particles moving more and there is more chance of a collision. “(1) 3) The length of the wire will go up in 100mm intervals and will be measured with a ruler so that it is accurate. For each experiment the same bit of Nichrome wire will be sellotaped to the same ruler to make sure I use the same apparatus. This will make my experiment more reliable. 4) In the circuit will be two leads with crocodile clips, a multimeter and the Nichrome wire.

I will also be using a thermometer to measure in degrees the temperature of the room. 6) The thickness of the wire is 0. 45mm. I can also tell this by measuring lengths of 100mm each time and testing the resistance is the same for each length of the wire I used. This is fair because if the wire were different thickness’ it would give me inaccurate results. Although the longer the length the higher the resistance, if the wire is thick its resistance is lower because its just like a resistor and works in parallel and lets the current through easily.

I think that if the wire width is increased the resistance will decrease. This is because of the increase in the space for the electrons to travel through. Due to this increased space between the atoms there should be less collisions. 7) I cannot measure the temperature of the wire but the current going through the circuit is not high enough to give a significant heating affect. This will keep my experiment fair because the wire will stay the same temperature, which will not affect its resistance. I think that if the wire is heated up the atoms in the wire will start to vibrate because of their increase in energy.

“This causes more collisions between the electrons and the atoms as the atoms are moving into the path of the electrons. “(1) This increase in collisions means that there will be an increase in resistance. 8) The material used is Nichrome wire. This will be the same piece of wire for each experiment so it is accurate. I think that the material of the wire will affect the amount of free electrons, which are able to flow through that wire. This is because the number of electrons depends on the amount of electrons in the outer energy shell of the atoms, so if there are more or larger atoms then there must be more electrons available.

“If the material has a high number of atoms there will be high numbers of electrons causing a lower resistance because of the increase in the number of electrons. “(1) Also if the atoms in the material are closely packed then the electrons will have more frequent collisions and the resistance will increase. Predictions I predict that the longer the length of the wire the higher its resistance, if the length increases then the resistance will also increase in proportion to the length. This is provided that the thickness of the wire is kept constant.

I also predict that as the cross-sectional area of the wire doubles, the resistance will half. If you subtract the resistance of the two leads and the two crocodile clips from the resistance measured during the experiment, I found that then the graph would go through the origin. Justifications The reason for my prediction is because the longer the Nichrome wire, the more atoms, which means a greater chance of electrons colliding with the atoms. The number of collisions will slow the flow of electrons down (because the electrons loose some of their energy) and increase the resistance.

“Free electrons are created, which carry a negative charge, to jump along the lines of atoms in the Nichrome wire. Resistance is when these electrons, which flow towards the positive, collide with other atoms; they transfer some of their kinetic energy. “(1) This transfer on collision is what causes resistance. “As electrons pass through the wire, the electrons hit the atoms of the wire whilst making the journey from one end to the other, giving opposition or resistance to the electrons. 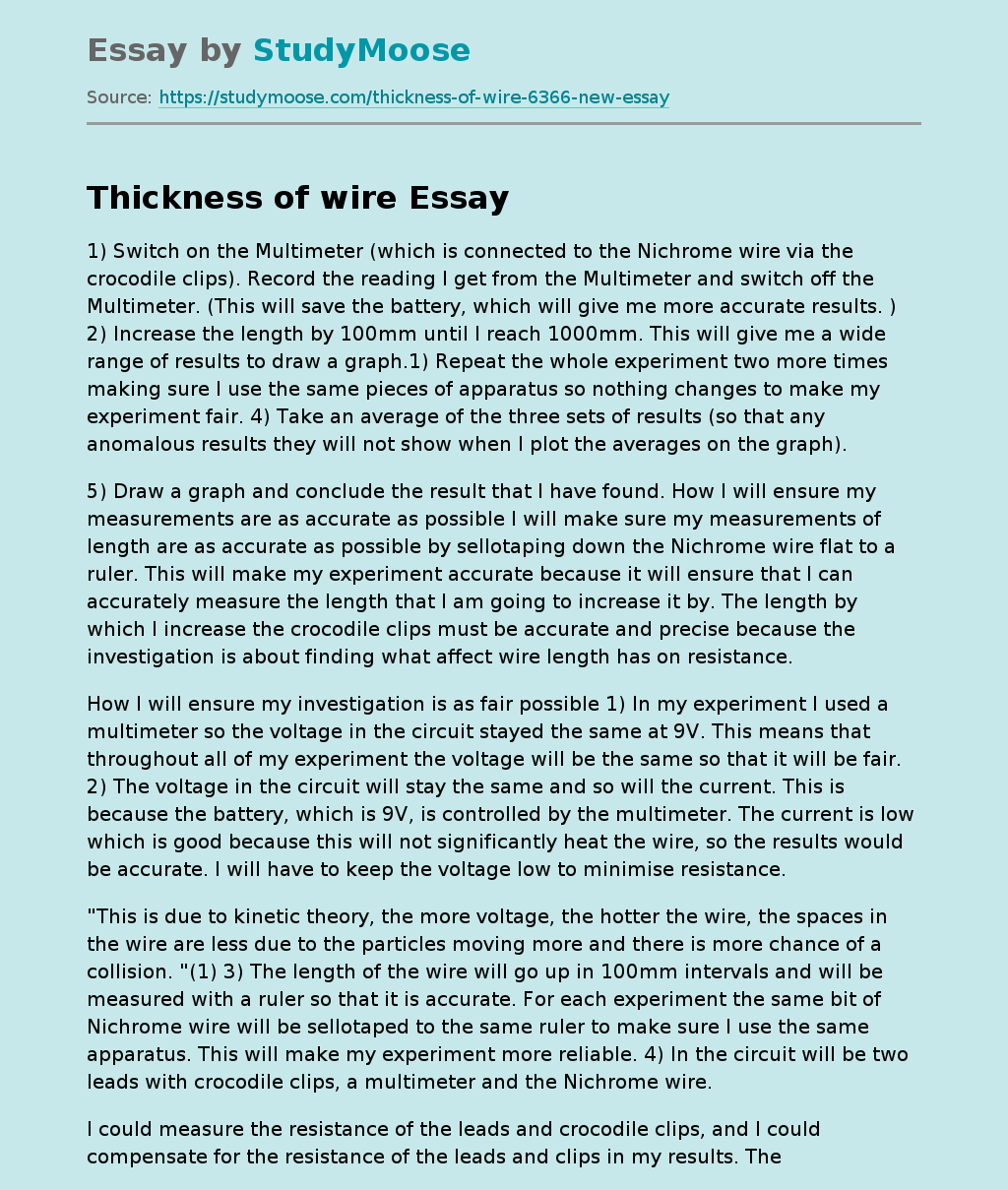