They Came Before Columbus

Ivan Van Sertima was born in Guyana, South America. He graduated from the School of Oriental and African Studies (London University) and the Rutgers Graduate School and holds degrees in African Studies and Anthropology. From 1957 – 1959 he served as a Press and broadcasting Officer in the Guyana Information Services. During several years in the 1960’s he broadcasted weekly from Britain to Africa and the Caribbean. Ivan Van Sertima works a literary critic, a linguist, and an anthropologist and has made a name in all three fields.

Don't use plagiarized sources. Get your custom essay on
“ They Came Before Columbus ”
Get custom paper
NEW! smart matching with writer

As a literary critic, he is the author of Caribbean Writers, a collection of critical essays on the Caribbean novel. He was honored for his work in this field by being asked by the Nobel Committee of the Swedish Academy to nominate candidates for the Nobel Prize in Literature from 1976-1980. As a linguist, he is also the compiler of the Swahili Dictionary of Legal Terms, based on his field work in Tanzania, East Africa, in 1967.

He is the author of They Came Before Columbus: The African Presence in Ancient America, which is now in its twenty-first printing. It was awarded the Clarence L.

Hotle Prize, a prize awarded every two years “for a work excellence in literature and the humanities relating to the cultural heritage of Africa and the African Diaspora”. Professor Van Sertima has lectured at more than 100 universities in the U. S. and has also lectured in Canada, the Caribbean, South America and Europe. (Ivan van Sertima’s Bibliography; available from http://www.

blackwebportal. com/wire/DA. cfm? ArticleID=596; Internet; accessed 11 October 2005) From the history courses we usually get the information that the first Africans who arrived to America were solely slaves, brought in special slave-ships.

In this way the picture of the black man who is everlasting slave of the white people is created in the minds of the most Euro-Americans. With the aim to justify historical crimes of slavery and colonialism, Americans as well as Europeans have invented a net of evasion and falsehood and now present these all as historical facts. The whole history of mankind is written in such a way that it does not reflect the achievements of black population from African continent and their contribution into the world culture. In such a manner the impression is created that such contribution does not exist at all.

And this will be the usual consequence when a common person may arrive to the conclusion about “Negro inferiority” and this person will relatively look for the justification for all these crimes committed by the Europeans in relation to black people. The book They Came Before Columbus by the professor Ivan Van Sertima presents cogent arguments for existence of culture and science in aboriginal population of African continent long before Columbus epoch. The overall purpose of the book is to destroy the myth of inferiority of the black.

Sertima’s work focuses largely on two main topics that is the contact between African and American towards the close of the Bronze Age (circa 948-680 B. C. ) and the Mandingo-Songhay trading voyages (from early fourteenth to late fifteenth century). According to conventional history, Christopher Columbus “discovered” America. The natives who had lived there for centuries did not matter. But Ivan Van Sertima presents an array of evidence to support the claim that the Africans were present in the New World centuries before Columbus.

Long before Columbus started traveling, Africans had been to the Americas on expeditions, had lived among and traded with the natives, and had in fact influenced the native American civilizations greatly. The presence of Africans in North and South America has until recently been ignored, if not kept secret, by historians as a part of the larger concealment of African history. The significant difference, unlike Kemet (Ancient Egypt), is that the African presence in America presents a rather more difficult challenge in as far as modern history claims that a certain Christopher Columbus “discovered” America.

When the Africans arrived, they infused their culture into the existing cultural terrain of the native people and also embraced their gods, a concept well established in Africa for thousands of years. By so doing the Nubian-Kemets recognized the Amerindian gods, which in effect acknowledges the Ameri-Indians as custodians and spiritual title-holders to the land; the Africans did not discover America. The land and its people were already there. Available archaeological evidence and definitive historical accounts point to pre-Columbian West African expeditions across the Atlantic between 1307 – 1312AD.

The work of Al-Umars, a 14th century Islamic historian, who recorded the visit of Mansa Kankan Musa I, one of the most remarkable Mandinga emperors in Mali, when he stopped over in the Egyptian capital, Cairo, enroute to Mecca in 1324 AD, testify to the Mandinga expeditions across the Atlantic. Umars’ account quotes Mansa Musa as saying that his predecessor had launched two expeditions from West Africa to discover the limits of the Atlantic Ocean.

Umari, writing a few decades after Mansa Musa’s visit to Mecca, states it in his writings. Emperor Abubakari II [the immediate predecessor of Mansa Musa] was the monarch who lunched the expedition with 2,000 ships. The expedition was likely to have reached Attilles or other points bordering the Caribbean and the Gulf of Mexico. The Mandinga traded gold and woven cloth called “almaizar” (a cloth often made in various colors and used as a single garment from which other garments were made) with the Amerindians.

Columbus knew the source of the clothes, hence his ability to express an informed opinion in his days that the Indian “almaizar” was “like those brought from Guinea, from the Rivers of Sierra Leone and of no difference”. It is conceivable that the Mandinga who already occupied various places on St. Vincent island and were familiar with the terrain, would have welcomed (in the 15th century) fugitive Africans (their kith and kin) running away from slavery. The earliest African presence in the Americas is that of the people of Nubia and Kemet.

This was proved by the discovery in 1858 of a gigantic (head) self-portrait with Nubian features carved out of single basalt measuring 8ft by 18ft in circumference, and dating back to 800-600 BC. It was discovered in the village of Tres Zapotes in Mexico. Seventeen of these heads have since been discovered all over South America. In 1869, Jose Meglar, a 19th century Mexican scholar, wrote a brief description of the sculpture in the Mexican Society of Geography and Statistic Bulletin.

But this article was met with silence by Euro-American scholars, despite the physical evidence on the ground, such as the Colossal Head. The taboo was finally lifted in 1939, when the American scholar, Matthew Stirling, led an archaeological team to Tres Zapotes in Mexico and excavated the Colossal Head that Melgar had mentioned 77 years earlier. Additionally, hundreds of images of Africans in terra cotta, made between 1500 BC and 1500 AD, have been unearthed in the Americas, affirming a prolonged presence of African ancestors in that part of the world.

The earliest settlers in Central America date from 3000-2000BC, but the major civilization that preceded them all was the Olmec, which influenced all the American civilizations, including the Atzec, the Mayans and the Incas. The Olmec civilization [1200-400BC] was all pervasive, specifically; it was at La Venta in Mexico that the Olmec lay the foundation of ancient America, marked by pyramid complexes and hieroglyphic writing, a trait which was later to be assimilated by other civilizations in the Americas, including the Maya.

In all their activities Olmec civilization underwent influence of Nubian-Kemetic civilization. The debate now being waged in academic circles is not so much that Africans occupied elite positions in the ancient American civilizations, but from which part of Africa they came from thousands of years ago? Africans, contrary to conventional historical accounts, had been sailing not in dug-out canoes but ocean-going vessels from as far back as 3800 BC.

A painting of an ocean-going vessel has been found from the era of Ta-Seti, the first major African civilization that preceded Kemet. The first pyramid in the Americas was built at a ceremonial location. Commenting on the American pyramids, Dr Ivan Van Sertima notices in his book that the pyramids in Mexico are identical in orientation to that of Kemet. During the Equinox, the interplay between sunlight and shadows forms triangular patterns, creating images of serpents slithering down the northern staircase of the pyramids as in Kemet.

The striking similarities between the Olmec civilization and Kemet can be seen in the cultural and scientific arenas. For example, there is an existing Olmec painting of a dignitary wearing a double crown. He is offering an object with Kemetic symbols on it, to a person of distinctively African appearance in the Temple at Cerro de la Piedre in Mexico. Again, the nine gods of Kemet mentioned in the book of creation is equally found in America and recorded in the pyramids in Mexico as the “nine lords of the night”.

So, taking into account these prolific evidence of the influential role of ancient African civilization in formation and development of the successive civilizations we cannot but admit Africa’s contribution into the world culture and civilization overall. Bibliography: Wonham, Henry B. Criticism and the Color Line: Desegregating American Literary Studies. Rutgers University Press, 1996. Sertima, Ivan Van. They Came Before Columbus: The African Presence in Ancient America. Random House, Incorporated, 1976.

They Came Before Columbus. (2016, Aug 10). Retrieved from https://studymoose.com/they-came-before-columbus-essay 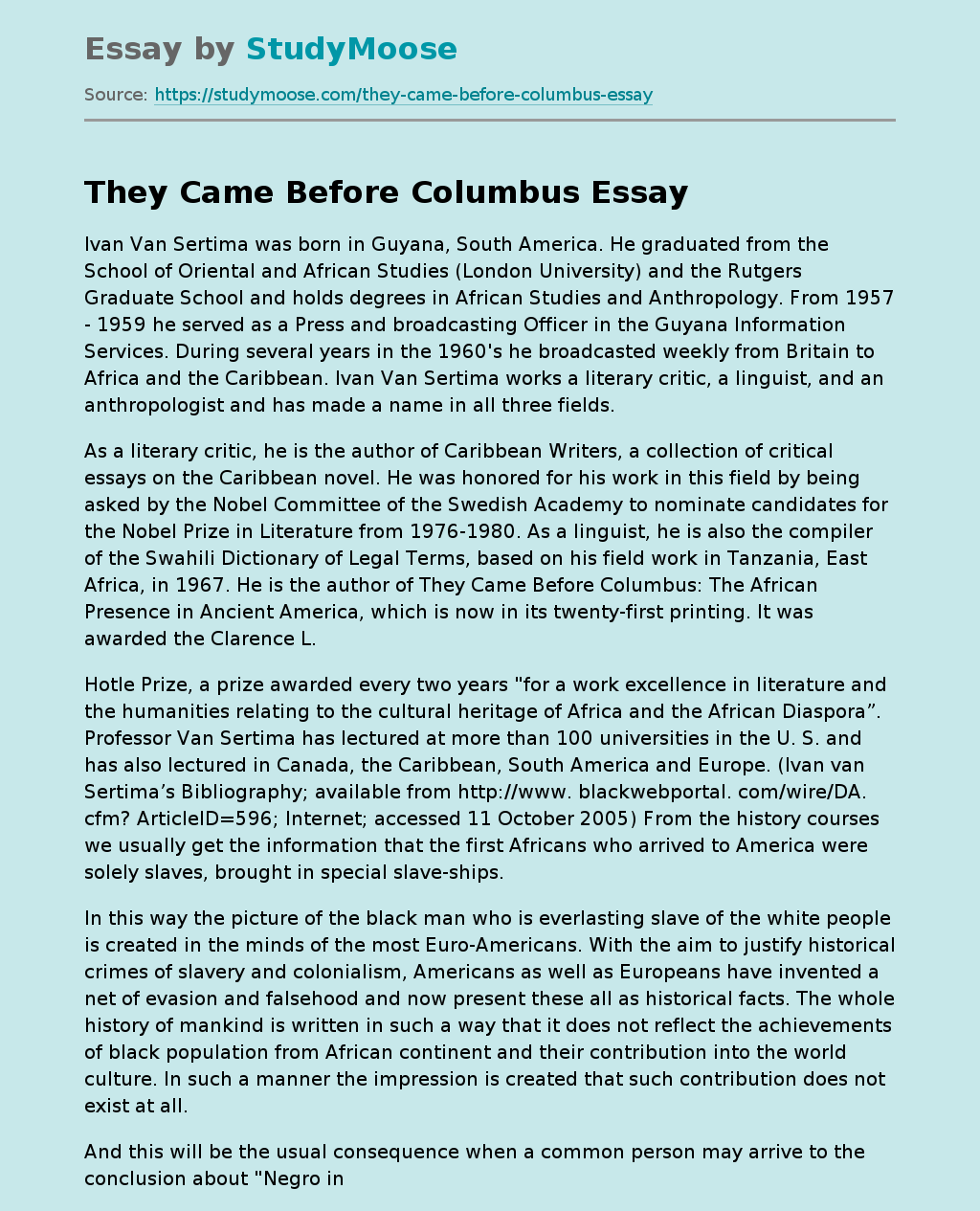