For the initiation of fermentation, hybrid and effective bioactive compounds should be achieved from fermented products. Usually fermentation can be done using many micro-organisms, but its effective by using the pro biotic bacteria (Oh et al.

Industries had to face many challenges over the consumers requiring for the safer, healthier and nutritional foods [Oliveira, A.

Probiotics consists of friendly bacteria. They can promote the equillibrium of intestinal flora. (Plessas, S., Bosnea, L., Alexopoulos, A., & Bezirtzoglou, E. (2012)). Hence food industries have planned for producing high probiotic foods. Dietary habits have been turned to more healthy options over past years while increasing awareness to health benefits of food based products.

Hence, this study is designed to examine the probiotic foods using effects of various color led lights and darkness on the yield of bioactive compounds during fermentation of Guava, Chikoo and Papaya.

Guava (psidium guajava) is a common tropical fruit cultivated in many tropical and subtropical regions. It belongs to Myrtaceae family. Guavas are originated from Mexico or Central America (Morton JF (1987)). Guavas were espoused in tropical and in subtropical asia.

These fruits are usually 4 to 12 centimeters long and round or oval depending on their shapes (Morton JF (1987)). They have typical fragrance and are similar to lemon. World production of guavas were 46.5 million tones in the year 2016 (Tridge. 2016).

The outer skin of guavas can be rough with bitter taste. And pulp of the fruit may be sweet or sour with deep pink (red guavas) or off-white (white guavas). Depending on the species, the central seeds may be harder or softer. Single guava fruit contains four times the vitamin C of an orange.

Chikoo (Manilkara zapota) is also commonly known as sapota, nispero or sapodilla ( Morton, J. (1987)). It is an evergreen tree native to Central America andd Southern Mexico. The name zapota is derived from Spanish word zapote. The fruit is about 4-8cm in diameter (Harris, Kate (2009).

The flush has pale yellow to earthy brown color. It also has a grainy texture. There will be about one to six seeds in it. The seeds resemble like a beans and are hard, black and glossy. The fruit is extraordinarily sweet and has malty flavor. The unripe fruit is hard and has an firm outer skin(Harris, Kate (2009).

They have an enormous amount of saponin which has astringent properties. They have properties similar to tanin which can easily dry out the mouth. These trees are temperature sensitive. They can survive only in warm condition and in typically tropical environments.

This particular fruit plant can grow in three different sexes. They are male, female and hermaphrodite. The male fruit produces only pollens, female fruit produces small inedible fruits. And the hermaphrodite can self-pollinate itself. It is highly frost-sensitive. This plant grows rapidly fruiting within three years. Commonly two different kinds of papayas are grown. They are Red papaya and Yellow papaya.

In 2010, eighty percent of Hawaiian papaya was genetically modified. In 2016, the global production of Carica papaya was about 13.05 million tonnes. And it was led by India with 44% . Usually the pulp of raw papaya contains 88% water, 11% carbohydrates, proteins and fats. Papaya provides 44 kilocalories of in 100 gram amount of flesh. It has high source of Vitamin C ( Rivera-Pastrana DM, Yahia EM, Gonz?lez-Aguilar GA (2010)).

Lactobacillus casei is a probiotic bacteria. It is a species of genus lactobacillus belonging to the Lactobacillaceae family. And is usually found in the human urinary tract and in mouth. They have wide ph and temperature range. They have high application in diary productions.

Dominant species of nonstarter lactic acid bacteria is Lactobacillus casei. They are most widely studied and are present in the functional fruits. In the food preparation, they are also commonly used for natural fermentation (Kazuyoshi Takeda; Ko Okumura (2007)).

Hai et al. (2000) and Yan et al.(2013) had already reported that LED’s have high potential to be used in the bioreactors. LED lights are usually electroluminescent. And the color change of the light is identified by the band gap of the semiconductor.

Main objective is LED’s can emit high intensity using low energy. In this study, antioxidant activities and anti-diabetic activities are analyzed. These activities are done using the photo-fermented samples. Different colored led lights are used for their different wavelength reaction to the fruit samples along with Lactobacillus casei.

Inoculum preperationDe Man, Rogosa and Sharpe Media (MRS Media) was dissolved completely. And they were Sterilized by autoclaving at 120°C and at 1-1.5atm for 15 min prior to use. Probiotic Bacteria, Lactobacillus casei was added into it. The media was incubated at 37°C for 24 hours.

The fruit sample extracts were prepared for fermentation . The fruits were purchased from the Fruits and Vegetable store (Pazhamudhir cholai) in South India. The purchased fruits were washed with autoclaved water and they were peeled off.

The fruit extracts were smashed using autoclaved motor and pistil individually. Furtherly, distilled water was added to the fruit extracts and are dissolved. This extract sample was sterilized by autoclaving at 120°C and at 1-1.5atm for 15 min.

Commercially available LED (Light Emitting Diode ) lights of illumination strips of different colors and 9V HI-WAAT battery was purchased. Red, Green, Blue and Yellow light strips were connected to the battery. They were assembled around the Erlenmeyer flasks accordingly.

The flask containing probiotic bacteria and the fruit extracts were placed on a shaking incubator at 120rpm.A flask with no LED light was also setup in the same incubator. Erlenmeyer flask was covered with black colored chart for the dark and to avoid the distraction of different wavelength of LED. It was setup with appropriate temperature and left in the incubator for about 48hours.

LyophilizationIncubated fruit extracts were centrifuged at 4000rpm for 5min at 4°C. Supernatants were freeze dried using lyophilizer. These powdered samples were stored at -20°C.

FT-IR Spectra of unfermented and fermented fruit extract samples were obtained after incubation under various light conditions by L.casei and were recorded using Perkin-Elmer FTIR spectrophotometer in diffuse reflectance mode at 400 – 4000 wavelength at a resolution of 4 cm?1 in KBr pellets.

To which phosphate buffer is added to make up for 500 micro liter. The reaction mixture was incubated at room temperature for 5 minutes for the enzymatic reaction to occur. Finally, the reaction was concluded by adding 0.1% HCl acid.

Eventually, iodine reagent was added to the mixture. Starch concentration was absorbed to be decreased due to the activity of ? – amylase . It was measured at 660 nm using multi – well ELISA plate reader.

The Fruit extract samples are photo fermented and the color changes was observed for each individual sample at different LED light wavelengths.

And furtherly the O.D was observed using spectrophotometer. Anti-Oxidant activity has been observed by the color change from Violet to light Yellow color. lowest O.D shows high concentration. 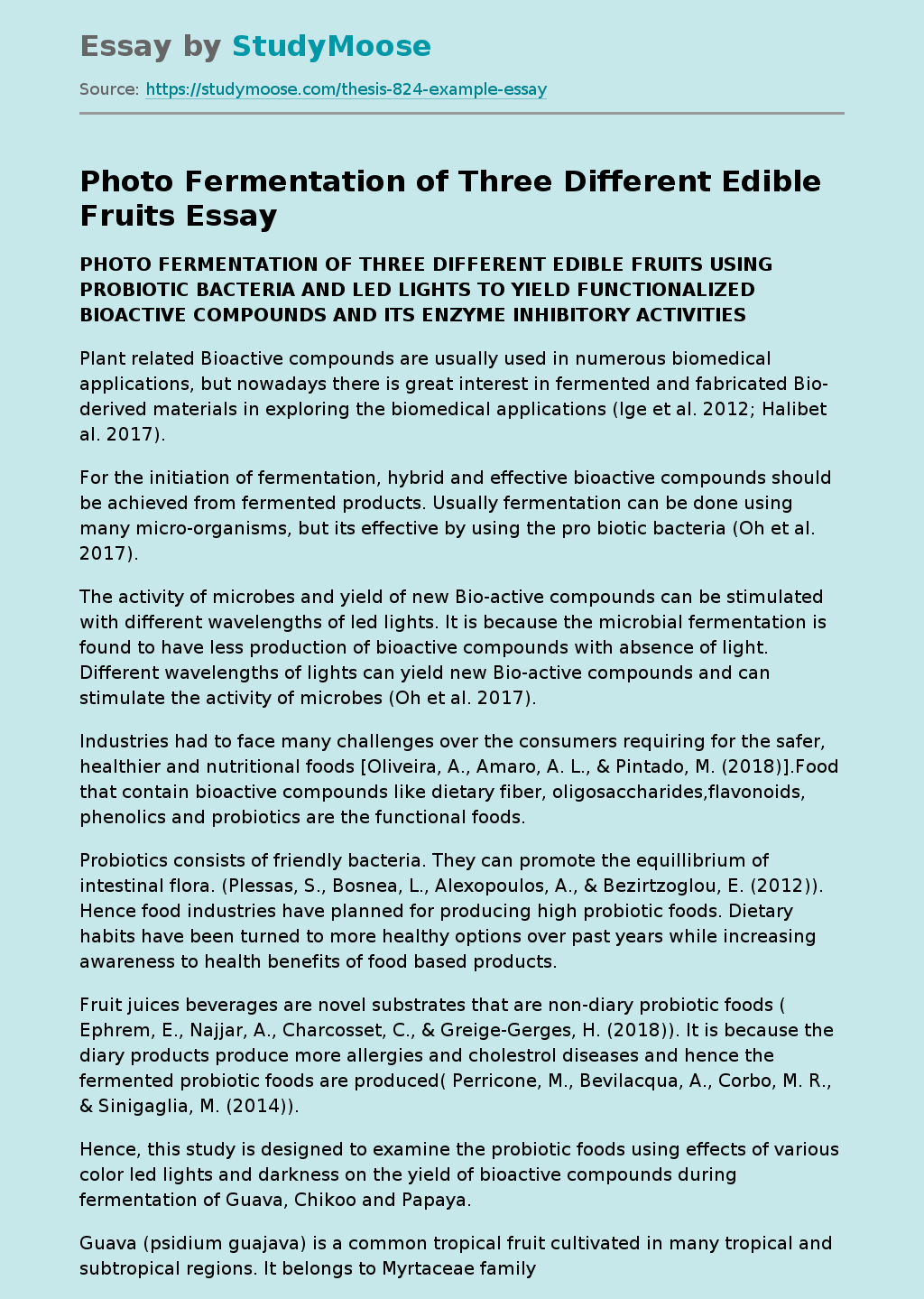