In our world today it is often hard to genuinely decide what in fact is right or wrong.

Don't use plagiarized sources. Get your custom essay on
“ Theory On Deontology ”
Get custom paper
NEW! smart matching with writer

The reason that it is so tough to determine is because of our human nature given everyone has their own opinion. We do not all think the same or think the same actions and consequences have the same effect. It is this reason we analyze situations with ethical theories, such as that of Kant’s deontology. Kant’s theory in its own right has a strong moral foundation in which it seems understandable to decide what is right or wrong. However it has its weakness as well.

Instead Kant wants us to look at the way one thinks when they are making choices. Kant believes that we have certain moral duties in regards to one’s actions. It is our moral duty that motivates ones to act.

Theses actions are driven either by reason or the desire for happiness. Since happiness is differs from person to person, it is conditional. Reason on the other hand is universal and can be applied to all making it unconditional. In Kant’s theory on deontology, actions are either intrinsically right or wrong, which is based largely on reason.

Kant says that it is in virtue of being a rational being that we as humans have the capacity to be moral beings. Also that moral law amounts to one’s duty. Kant says duty is grounded in a supreme rational principle, thus it has the form of an imperative.

The imperatives of skill are imperatives that lead to an action in which the end result desired would be anything other than happiness. The imperatives of prudence are imperatives that lead one to actions, where the desired outcome is happiness. Kant believes that morality however is not like this. Morality does not tell one how to act in order to achieve a goal. Instead morality is made up of categorical imperatives. Kant taught that morality is universal, meaning it could be applied to all and moral law must be obeyed. He believed that when we act we are using moral law and act on the maxims, or the universal rules, of our actions.

This means that as an imperative it is a command and being categorical the command has its whole worth with in itself. The categorical imperative doesn’t have some proposed end as in a hypothetical situation, it has its own rational necessity in its justification. Kant’s principle of morality is essential to “good will. ” This is a will that acts for the sake of duty. It is the only thing that is good without qualification. Thus a good will cannot be made better or worse by the result it produces.

Good will is also the basis for a major part of Kant’s theory and that is the Universal Law Formula, which is the basis in which Kant uses to determine whether or not things are morally right or wrong. This formula states that one should act in such a way that your maxim could become a universal law of nature. That is if you took your belief or ideal and applied it to the entire world would it hold true and not contradict itself. Kant’s categorical imperative has two formulations included within it, one being the Formula of Universal Law and the other being the Formula of Humanity.

The second formulation, The Formula of Humanity, is a principle under the Formula of Universal Law. Kant’s defines the Formula of Humanity as “Act in such a way that you always treat humanity, whether in your own person or in the person of any other, never simply as a means, but always at the same time as an end. ” This formulation states that one’s actions are immoral if it is using a person as a means to an end. It also has to be understood that Kant’s ideals greatly fall on a matter of agency, whether or not you are in fact the one willing an action that causes a negative outcome even if you did so now the result of that action would do more good.

Because you took action you are the agent that caused a negative outcome. The proposed “better” outcome has no value towards the morality of your action. Kant’s strengths in his theory are that they can be applied to nature as a whole, thus the universal law formula. His theory doesn’t depend on an individual’s virtues or character. His weakness is that his morality is based on one’s personal action and doesn’t take in to account the outlying consequences that could ultimately benefit from that action.

With Kant’s theory I believe we can make a more sound argument as an approach to ethics. With Kant we have to take situations and become very specific with them. We focus on what the action is and universalize it. That way no matter where in the world it can apply to everyone and won’t contradict itself. Then and only then we decided if it is morally right. Also Kant’s theory is good because it leave no grey area with its matter of agency. It doesn’t let possibilities of better or worse consequences affect the morality of the action in question. Thus I believe in all Kant has a more promising approach for ethics. 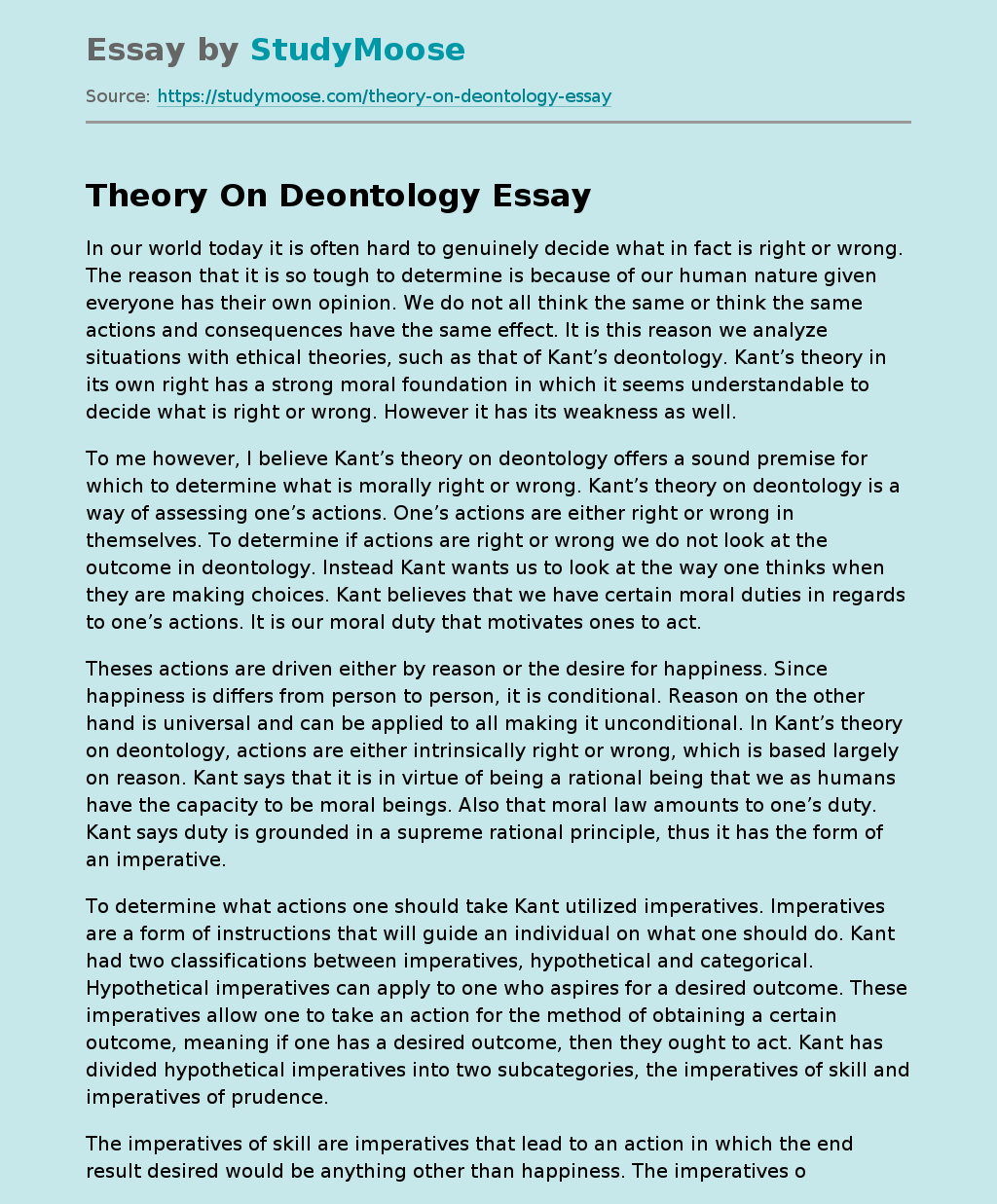