Theories of Cognitive Development by Piaget and Vygotsky

Jean Piaget’s and Lev Semionovich Vygotsky’s theories on cognitive development both play a significant role in addressing the intellectual growth of children (Lain, 2006). Psychologists and educators alike, rely on these theories in constructing the standards by which children are being brought up and taught today. Essentially, cognitive development is the process by which our intellectual ability grows and progresses. Slavin (2003), maintains that cognitive development, “is the gradual and orderly changes that occur making ones mental process more complex and sophisticated” (as cited in Lain, 2006, Cognitive Development section, para.

Don't use plagiarized sources. Get your custom essay on
“ Theories of Cognitive Development by Piaget and Vygotsky ”
Get custom paper
NEW! smart matching with writer

1). As the children’s learning process is crucial to the development of their learning ability and critical thought process, educators must have a good grasp of these theories to fully address the children’s individual learning needs. Jean Piaget’s theory is marked by several developmental stages that define the child’s corresponding cognitive level. On the other hand, Lev Vygotsky developed the Zone of Proximal Development (ZPD) based on the assumption that children learn more quickly under the guidance of a more experienced adult (Maccarelli, 2006).

Considered as constructivists, both renowned theorists believed that children learn by formulating new ideas by combining old ones. The Hawai’i Department of Education E-School also claims that, “constructivists believe that learning is affected by the context in which an idea is taught as well as by students’ beliefs and attitudes” (as cited in Davison, 2006, Piaget vs Vygotsky: The Cognitive Development Theory section, para. 1). As society determines the amount of knowledge a child gains, it also sets the limit to the students’ cognitive development.

However, the principal ideas between the two theorists vary greatly. Piaget strongly believed that learning occurs after development. He indicated that a child will start the learning process after the child has reached a certain developmental stage. Contrarily, Vygotsky claimed that the child develops as a result of learning. Furthermore, Vygotsky placed a large amount of emphasis on the importance of outside influence to the child’s overall cognitive development, where as Piaget barely acknowledged the significance of outside influence on the child’s development in his theorems.

Moreover, while Piaget’s theory has four distinct and set standards of development, Vygotsky’s theory does not support predetermined stages at all. Instead, he stressed the importance of private speech and ZPD on the child’s development. Living in a society that is an integration of multiple cultures, classified by age, race, gender, ethnicity, religion, and economic status, each of us is a product of our social interactions to these various cultures.

And as the study of multicultural psychology is greatly concerned with exploring, understanding, and appreciating the differences in culture, based on Piaget’s and Vygotsky’s theory, these multicultural issues could be avoided if children are exposed or introduced to diverse cultures early in life. References Davison, B. (2006). Piaget vs Vygotsky: The Cognitive Development Theory. Associated Content. Retrieved on January 01, 2009, from http://www. associatedcontent. com/article/94974/piaget_vs_vygotsky_the_cognitive_development. html? cat=4 Lain, (2006). Cognitive Development: A Comparison Between the Work of Piaget, Bruner, and Vygotsky.

Theories of Cognitive Development by Piaget and Vygotsky. (2016, Nov 13). Retrieved from https://studymoose.com/theories-of-cognitive-development-by-piaget-and-vygotsky-essay 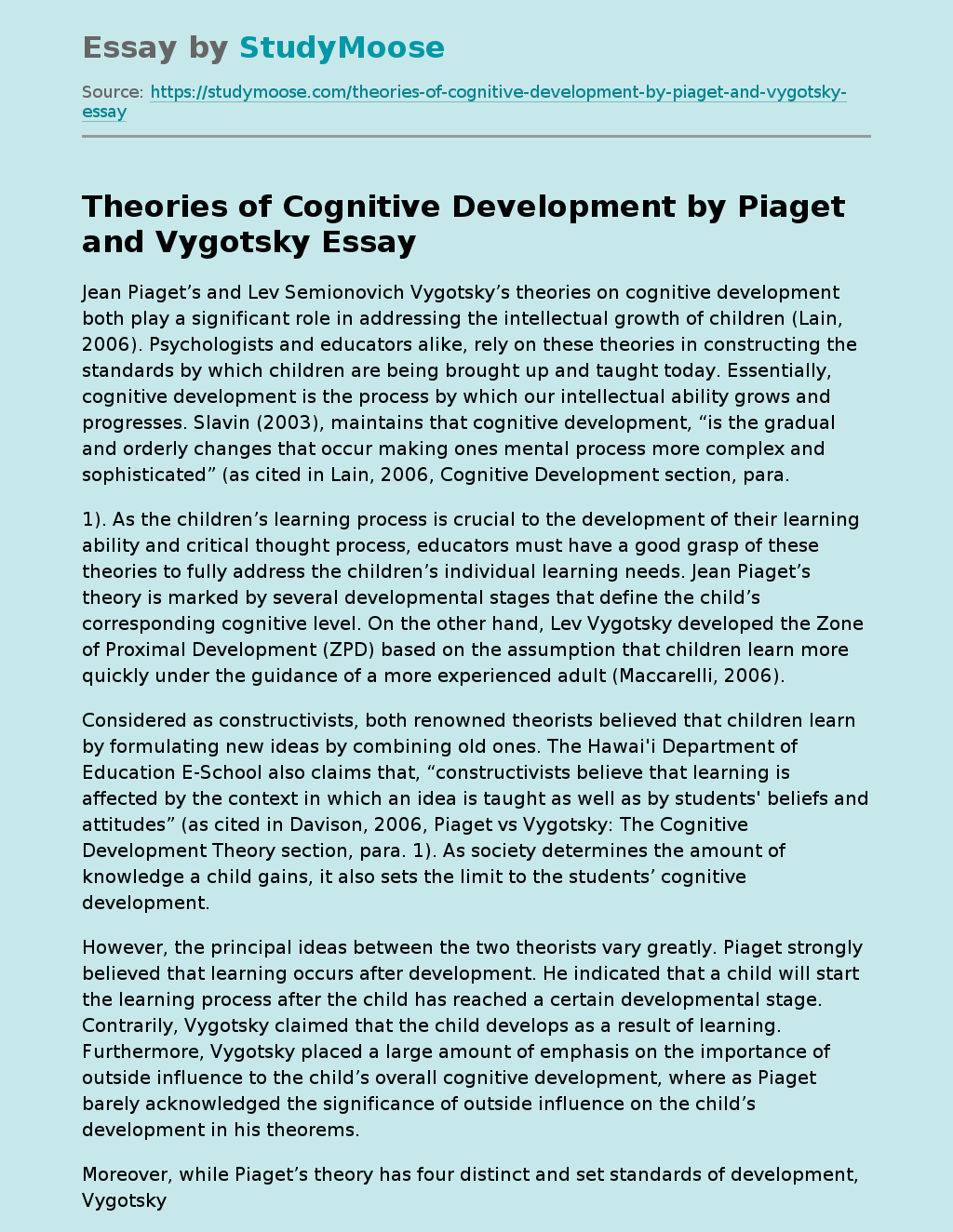