Don't use plagiarized sources. Get your custom essay on
“ Theodore Roosevelt ”
Get custom paper
NEW! smart matching with writer

Theodore was named after his dad who was a business and philanthropist; he graduated from Harvard (Britannica 1).

Theodore’s nickname was Teddy. Teddy came from a wealthy slave-owning family (Britannica 1). In 1876 Teddy went to Harvard. He studies German, natural history, zoology, forensics, ad composition (Milkis 1). During college, he met his wife, Alice Hathaway Lee (Milkis 1). They ended up getting married in October 1880 (Milkis 1). Teddy soon enrolled in Columbia law school and dropped out after a tear to begin in public service (Milkis 1).

On February 14, 1884, Teddy’s mom died from typhoid fever (Milkis 1). A few hours later his wife, Alice, died from kidney disease (Milkis 1). To get his mind off the grief the deaths brought him, Teddy bought thousands of cattle and two ranches (Milkis 1).

Without this agreement World War I could’ve started earlier than it did (Greene 30). Teddy delayed the outbreak (Greene 30). After Theodore Roosevelt became president he decided to use his strength to protect any wildlife and public land by creating the forest service for the United States (National Parks 1). He ended up establishing national forests, fifty-one bird reserves, four game preserves, five national parks, and eighteen national monuments (National Monuments 1).

‘Roosevelt signed the act for the preservation of American antiquities. This law gave permission for landmarks, structures, and other objects of history to be national monuments, ‘ said the National Parks website. Teddy could authorize monuments easier than the national parks because he did not need approval (National Parks 1). Theodore Roosevelt always said, ‘speak softly and carry a big stick; you will go far’, (quotes 1). Theodore was a very humble person. His ‘big stick’ was all of his achievements. Including being the first president to win a Nobel peace prize for being a negotiator (Milkis 1). He helped end a potential war between Russia and Japan (Britannica 1).

Teddy also prevented the world war from happening because of making an agreement with Germany and France (Roos 1). Theodore Roosevelt was the youngest and twenty-sixth president. He affected the united states in a positive way because he helped end the war between Japan and Russia, he established our national park systems, and he was the first president to win a Nobel peace prize. Although Teddy Roosevelt was one of the most liked presidents, he wanted to run a third term which caused the Republicans to dislike him (Britannica 1). Theodore used to always say, ‘carry a big stick’ and he did.

Theodore Roosevelt. (2020, May 24). Retrieved from http://studymoose.com/theodore-roosevelt-essay 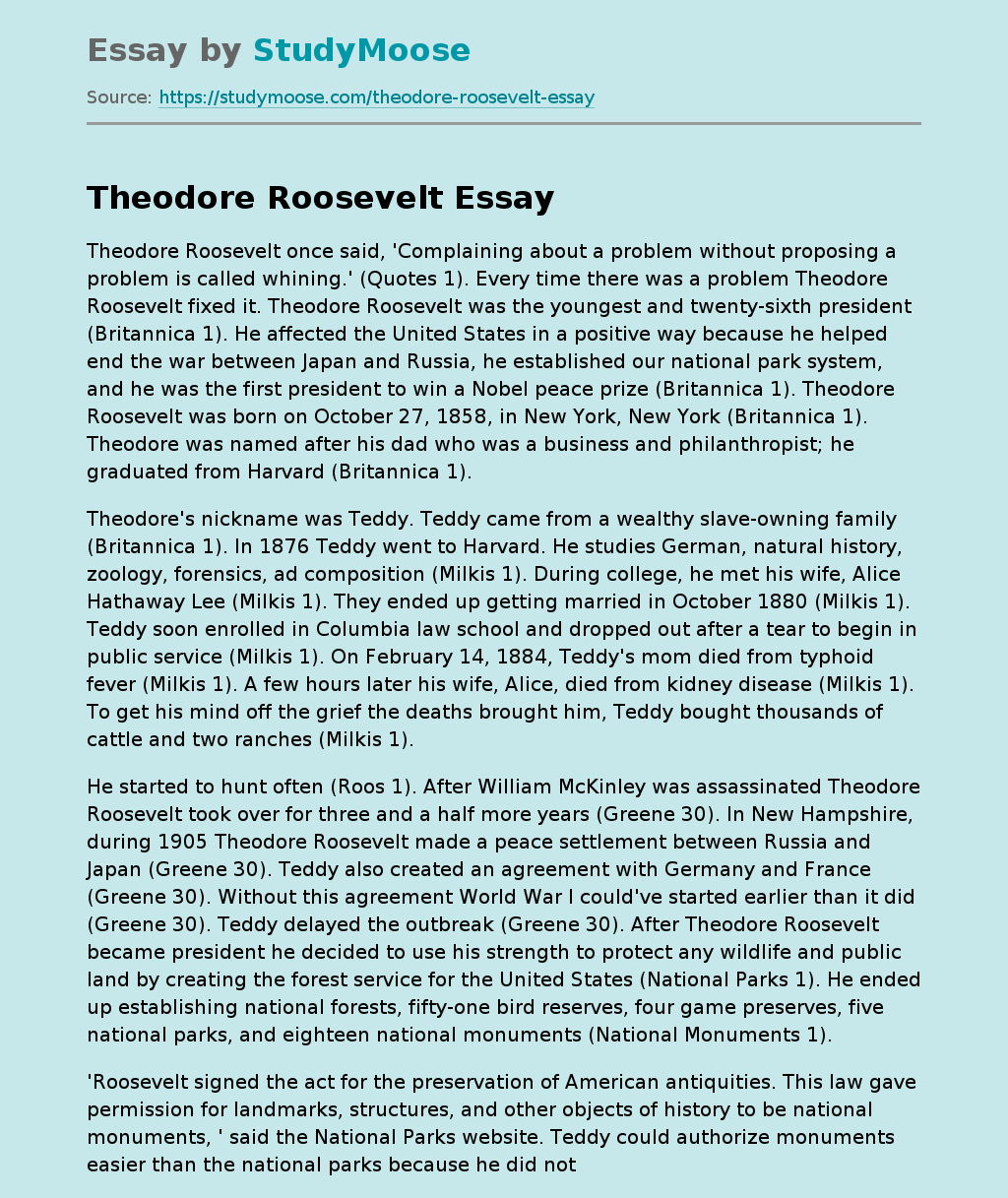