Themes in Indian Writing in English

The end of World War II led to the end of colonialism, which in turn saw the emergence of independent nations, trying to gain a foothold in the world. India was one of those nations. Before Independence, Indian Writing in English had no direct relation to the events which led to Independence. Hence, it was neglected by most critics. However, post-independence, this situation changed. The concern of the new poets became their relationship to and alienation from the realities of their society.

In particular, they faced a challenge from the older nationalist intellectuals and from regionalists who demanded a renaissance of the culture of the pre-colonial languages of India. Many of the poets, had left India for study or to travel abroad or simply because they were dissatisfied. Some of them returned after Independence only to realise that the post-independence India was not the same as the India they had left years ago. Hence they were disillusioned and they were struggling to understand their own motherland.

Therefore, their feelings of alienation and nostalgia were highlighted in their poems.

They also shed light on important issues such as the ambiguity of religion and the subjugation of women. The poets also adopted the Marxist ideology to give a voice to their protests in their poems. Themes: ALIENATION: Colonialism led to the migration of many Indians to other countries for better prospects and education. However, after Independence, when these people came back to India, they found it difficult to completely integrate themselves into the culture.

Hence a feeling of rootlessness emerged which can be seen in the writings of several poets. Poets like Ezekiel, Jussawala, Ramanujan are further alienated in the field of Indian English literature, not just by their English language education, but also more significantly, by their coming from communities such as Parsi, Jews and Christian. For example, Adil Jussawala views the contemporary Indian scene through the compassionate eyes of an exile returning to India after a long sojourn in the affluent west, in search of his identity. Hailing from the Bene Israel family,

Ezekiel is acutely conscious of his alienation being further accentuated by the fact that he spent most of his life in a highly westernized circle in cosmopolitan Bombay. Hence his heritage has branded his as a permanent Expatriate in India. The end result of alienation is that the work of these Poets is confessional in tone, obsessed with loneliness and insecurity and the self probing of a tortured soul. Some examples are: MANOHAR SHETTY (Bearings): “But it preys on me, this work Kept at bay by violent, Romantic rain, this incomplete home A book awaiting the final page. ”

In this poem Shetty speaks about the ardent need to find one’s bearings as they are our identity. This poem also hints at the need for counter-alienation and an almost desperate need for socialization. MARXISM: The new poets of Post-independence India are adorned with the feature or realism and protest as they are everyday watching the problems of perversion, corruption, degeneration, insecurity, terrors of bloodshed, feelings of helplessness, exploitation of poor and independence. The hypocrisy of man is operating on all levels of society. Hence their poetic sensibility turns to protest.

They urge the masses to rise against these doers of injustice and rebel against the so called capitalists, much like in a manner of the Marxists. Some examples are: JAYANTA MAHAPATRA( Hunger): “She opened her wormy legs wide. I felt the hunger there, the other one, the fish slithering, turning inside. ” Hunger is based on a real-life incident, where a father is trying to sell his daughter as a prostitute. It speaks of the depravity of the human soul in a bleak world, where one resorts to any means to satisfy their hunger. DILIP CHITRE( The Seventh Breakfast: News Of The World): “News flies like sperm Aimless among ova,

fertilizing matter and minds. ” In this poem, Chitre takes a dig at the superficiality of media. Media, which is so important as it influences our entire mindset, falls prey to corruption. NOSTALGIA: As mentioned before, since most of the poets left India to complete their education abroad, all they had to remind themselves of their cultural identity were memories. Hence, Nostalgia plays an important role in their poetry. Ramanujan’s poems are known for their unforgettable images, innovations in language, familial relations and nostalgia. Most of his poems have their origins in recollected personal emotion.

They all deal with his memory of his relations and the freedom that life away from them confers. Some of the poets have written about their relationships with their parents, which also comes under the theme of nostalgia. Some examples are: A. K. RAMANUJAN(Love Poem for a Wife-I): “Really what keeps us apart at the end of years is unshared childhood. ” SUBJUGATION OF WOMEN: By and large, Indian society is very patriarchal in nature. Women are given secondary status. They are expected to obey. They are confined by the wills of the men in their families. Even amongst children, girls are given less importance than boys.

Boys are the ones who are educated. The male son is expected to honour the family name. Girls are expected to help in the housework, be meek and docile and not have a say in family affairs. Women play the role of martyrs and sacrifice is something that is expected, if not demanded from them. Some poems which highlight this are: EUNICE DESOUZA(Transcend Self You Say): “The perfect book is One long cry in the dark. A Novelist said that, Who spent his life wondering why. When the Nazis came, His mother pushed him into a closet, And let his sisters go to Aushwitz. ” KAMALA DAS(The Old Playhouse):

“No more singing, no more dance, my mind is like an old Playhouse with all its’ lights put out. ” NISSIM EZEKIEL(Night of the scorpion) “Thank God the scorpion picked on me and not my children. ” AMBIGUITY IN RELIGION: Religion plays a very important role in most Indians’ lives. However, caught up in the fervour of religion, many irrational and potentially harmful practices are employed in the name of the Lord. The exuberant devotion to idolatry has caused many of our poets to pen down poems in protest to this superficiality of religion. Some examples are: ARUN KOLATKAR(The Bus):

“At the end of the bumpy ride with your face on either side when you get off the bus you don’t step inside the old man’s head. ” K. N. DARUWALA (Boat-ride Along the Ganga): “What plane of destiny have I arrived at Where corpse fires and cooking fires Burn side by side? ” This poem refers to the misdirected spirituality of the Hindu religion. References: www. wikipedia. org Bruce King Ph. D by Shaleen Kumar Singh, C. S. J. M University Kanpur, India www. profkvdominic. com Indian English poetry: New perspectives by K. V. Surendran Musings on Indian Writing in English (Vol 2) by N Sharda Iyer

Themes in Indian Writing in English. (2016, Jul 03). Retrieved from http://studymoose.com/themes-in-indian-writing-in-english-essay 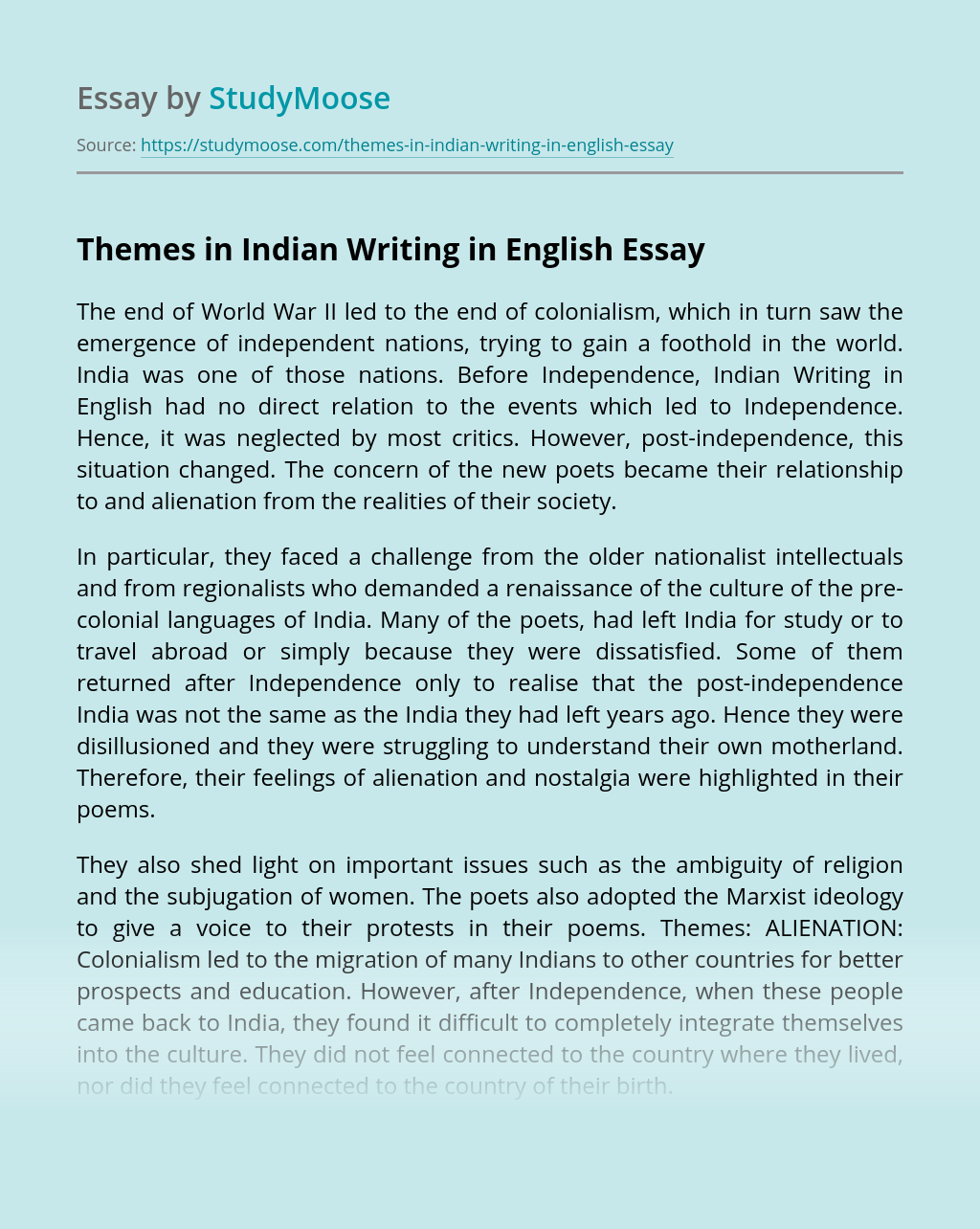 Don’t waste time
Get a verified writer to help you with Themes in Indian Writing in English
Hire verified writer
$35.80 for a 2-page paper
Stay Safe, Stay Original