Theme of Vegetarianism in a Book Eating Green

In Margaret Lundberg’s short story “Eating green” she has a theory about the planet becoming a healthier place to live if everyone became a vegetarian, which I believe is true. Lundberg talks about her childhood and how right off the bat her mother had her eating healthy food and that pretty much stuck with her through out her whole life. “We had two vegetables with every meal, ate plain yogurt for breakfast, and excercised with jack LaLanne.” If most families started off like that it would be easier for kids to enjoy eating healthier food now instead of them liking junk food.

Turn in your highest-quality paper
Get a qualified writer to help you with
“ Theme of Vegetarianism in a Book Eating Green ”
Get high-quality paper
NEW! AI matching with writer

Most people do not realize that what they eat does effect the planet and how we live on a daily basis and how badly it effects our health. If everyone became a vegetarian the rates of obsesity, diabetes, heart disease and other illness might become lower. The process of getting meat is causing some severe problems on earth such as pollution, global warming, and the dependence on fossil fuels.

“The energy it takes to raise, package, transport, store and prepare food is not the single largest contributor to global warming.” (Kate Geagan)

If all those problems could be solved by switching some of the things we eat, why not do it? It would definitely be hard and a cultural shock to Americans but if it can help our future loved ones I would be with it. The meat that is produced is not how it once use to be.

Cows do not live their lives on Pastured lands eating grass anymore they are now fed a diet that is not intended for them; fed corn in a short time as possible to speed up the process of being slaughtered and sold. That doesn’t sound so healthy or appetizing after reading those facts. “Livestock raised for meat production are responsible for 18 percent of greenhouse gas emissions-more than the cars we drive.” Not only is it Some what unhealthy for us to eat but for the world we live in also. Meat all together is not competely horrible for you it’s the portions we eat. Meat has nutritional value and even the fat in meat are sometimes healthy.

The stearic acid found in fat in meat can actually lower blood cholesterol levels. With the pros there’s the cons as well, “Americans are now eating nearly 200 pounds of meat, poultry and fish every year; an increase of 50 pounds per person in the last 50 years” ( Lumdberg) some very high numbers for what the appropriate amount should actually be. Farmers do not want to be looked at as the bad guys in all of this, which they aren’t, everyone has to make a living. A group of New York farmers thought of an idea to work with General Electric to produce renewable energy from cow manure. That is a pretty good idea to try and atleast get something good out of the slaughtering of the cows to try and help the planet Earth out. If successful the dairy industry would reduce greenhouse gas emissions by 25 percent in 2020, basically the equivalent of getting 1.25 million passenger cars of the road every year.

That is a good idea but it still does not solve all the other major problems that switching your diet could help. In conclusion, I personally feel that it will not hurt to try something new. Like I mentioned earlier it would be extremely difficult to get used to but if it is benefiting you, others and the planet might as well take a chance. Why wait till it is to late to change your habits of wanting a 16 oz steak over a green salad knowing how many pros it would be to choose that salad. If things continue to go as they do, there will be no more places to raise these cows to produce meat because global temperatures are raising, causing serious climate changes In places that are specifically used for farming. Eventually there will not be enough meat to feed everyone leaving everyone to forcefully change their diets, why not do is a choice and not because you have no other options.

Theme of Vegetarianism in a Book Eating Green. (2016, Apr 09). Retrieved from https://studymoose.com/theme-of-vegetarianism-in-a-book-eating-green-essay 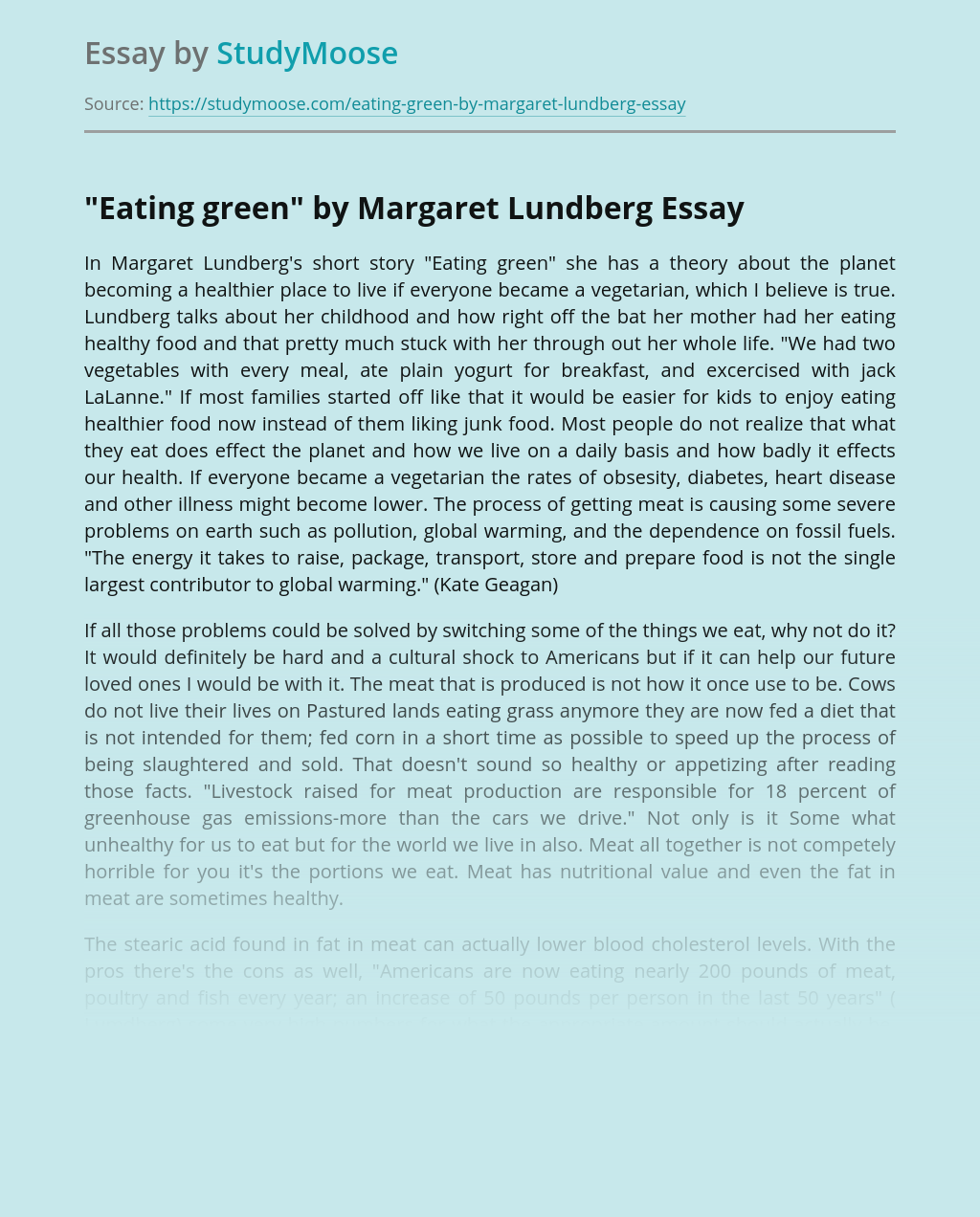 Turn in your highest-quality paper
Get a qualified writer to help you with
“ Theme of Vegetarianism in a Book Eating Green ”
Get high-quality paper
Helping students since 2015
Stay Safe, Stay Original