Theme of Individual Versus Society

Reverent Dimmesdale’s journey through the story shows how his insecurities effect his decisions. Dimmesdale often let his thoughts of rejection from his life as a loved godly man take away from what he needed to do. He shows, by these actions, a want to be accepted that is so strong that it can overpower his churchly values. Dimmesdale’s inner-conflict with his conscience demonstrates how his need to fit in with society overpowers his value to have a pure repented heart.

Turn in your highest-quality paper
Get a qualified writer to help you with
“ Theme of Individual Versus Society ”
Get high-quality paper
NEW! AI matching with writer

Dimmesdale isolates himself from society because his sin that he refuses to repent makes him paranoid to anyone he comes in contact with. The quote “Trusting no man as his friend, he could not recognize his enemy when the latter actually appeared.” (pg. 128) is a good example of his want to keep himself closed off to the world. Dimmesdale acts this way because he feels that if he gets close to people they will be able to see his sin; therefore, leaving himself open for people to call him out on his adultery.

Dimmesdale was hiding into himself so much because of his sin that he couldn’t push through and repent though if he would have he could have had a so much more than what he died with.

As a result of his inability to come clean to the public and accept his punishment he began to disintegrate as a man. The quote “beholding Mr. Dimmesdale’s frame so feeble while they were themselves so rugged in their infirmity,” (pg.

139) shows how weak Dimmesdale was throughout the time he was keeping his sin in his heart. Dimmesdale got so weak and sick because his sin consumed him, and all he could do was live around his sin until he could stand up to his fear and say what he needed to. By refusing to repent he signed his life over to his own self destruction; furthermore, sealing his fate as another character to fall victim to his tragic flaw, which in his case is his cowardice.

As Dimmesdale is retreating within himself he is also gaining a following in the church that finds him to be a great leader in the church, who can do no wrong. The scene in the story where the colony finds Dimmesdale’s sock on the scaffold is a good representation of how high Dimmesdale’s pedestal is in their mind. Though the people know whose sock they’ve found they force the thought that it’s the devil’s because they are so deep in with their minister that believing that he’s sinned makes their believes ‘lies’. These people, who should be a comfort for Dimmesdale, because he has a following that loves him, are really what end up killing him in the end because the reason he couldn’t confess was because he wanted their approval; also, they make him feel guilty for lying to them since they have so much faith in him.

Another way society pulls him is by punishing Hester as much as they did. Dimmesdale feels guilty because he gets off clean and squeaky while Hester gets a life full of ridicule for her and their daughter. This affects him so much because he feels like she wouldn’t be in the situation if not for him; also because Hester let him off the hook and took all the humiliation on herself and he wasn’t even enough of a man to step up and admit to what he did on his on accord. If society was softer on Hester he wouldn’t have been so consumed by his guilt.

Dimmesdale’s conflicts with himself fell through and he was only able to show what he needed to at his death. He needed the escape of life and the only way to set his soul free was to let his secret sin go. By letting go of his sin he let go of the earthly peril that kept him in his hellish life.

Theme of Individual Versus Society. (2016, Aug 03). Retrieved from https://studymoose.com/theme-of-individual-versus-society-essay 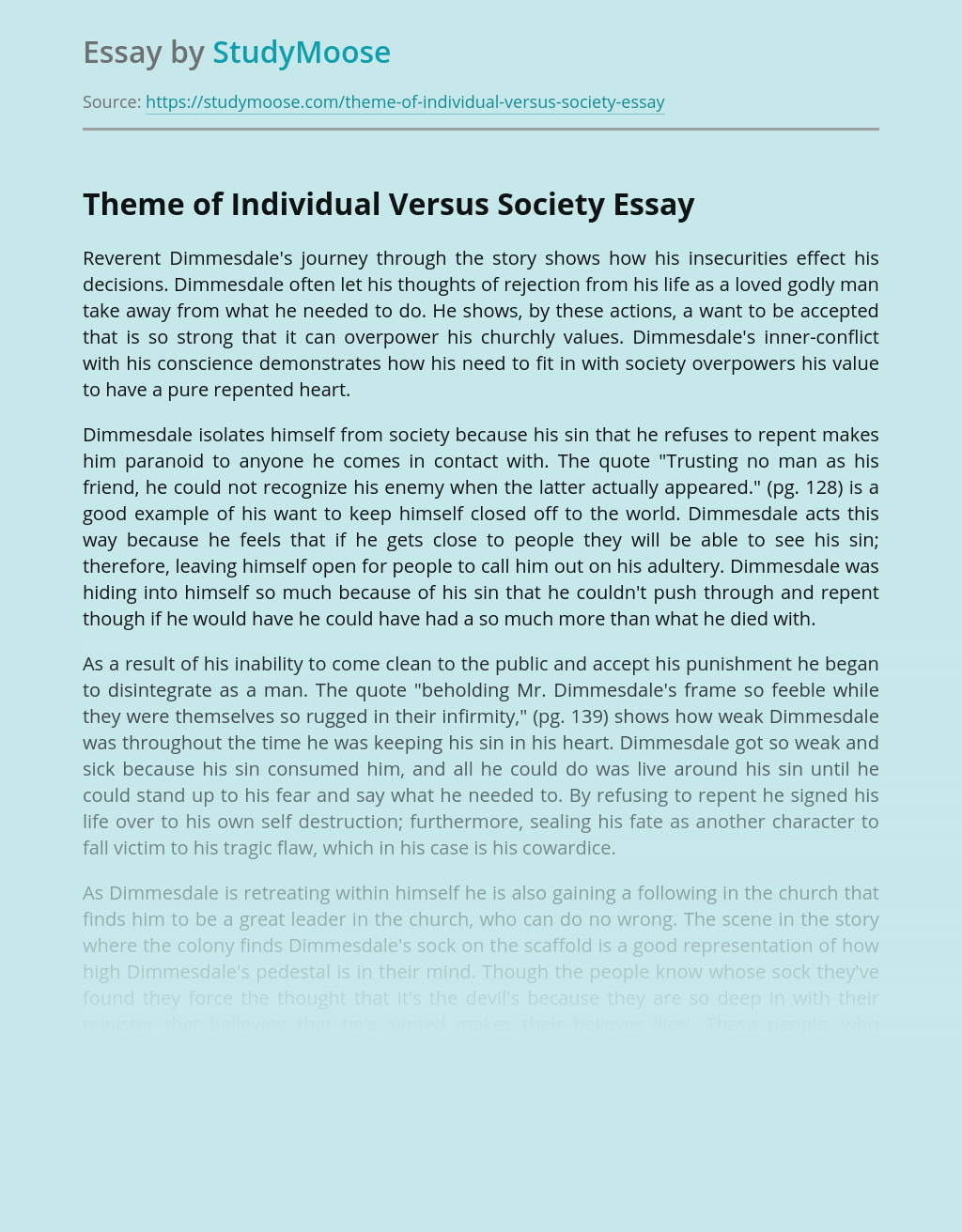 Turn in your highest-quality paper
Get a qualified writer to help you with
“ Theme of Individual Versus Society ”
Get high-quality paper
Helping students since 2015
Stay Safe, Stay Original