Theme of Importance of Books in Fahrenheit 451

In Fahrenheit 451, Bradbury, the author makes the story progress in three parts, each showcasing a different point in life starting with infancy and progressing into adolescence and adulthood. Bradbury also made the main character in the story, Montag change throughout the stages of life in the story. People may change due to the influence of people. Montag changes from being a book burner to an independent knowledge seeker due to the influences of Clarisse. Montag showed how he acted before he changed in his stages of life, after meeting a young girl, Clarisse, and after talking to an English professor Faber.

Don't use plagiarized sources. Get your custom essay on
“ Theme of Importance of Books in Fahrenheit 451 ”
Get custom paper
NEW! smart matching with writer

The story opens when Montag just completed another day wrecking literature because all books lend to readers comfort, development and freedom for ideas, and a richer life. As he walks back home, Montag still has the frown from the intense heat on his face, the grin of all of the men signed and drove back by flares. Montag met a girl, whose face is bright.

As they are both walking on the sidewalk together, Clarisse inquires if he is happy and what he talks about to others. It is an ordinary meeting on a strange night. This meeting between Clarisse and Montag is the initial of Montag’s growing regret with shiwing his frustration world in which he wears his happiness like the heated smile on his face. Mildred seems depressed as she neither recalls her escape from suicidal death, a condition that isolates Montag and leads him to ask himself, “What in life am I missing.

One of them goes into Montags unwilling hands. Still, in the night in his own home, he pulls it from his pocket. He seeks something to cure him of his growing feelings of being far from Mildred and her family. Afterwards, Montag tries to communicate with Mildred, “We’re heading right for the cliff, Millie,” and he touches nothing, he realizes that Mildred is lost. When being sick at home, Beatty appears to Montag, who questions his superior about burning books. Beatty explains with such an increasing population, books had to be deleted.

Montag finds Faber, who informs him that books value lies in the awareness of life. Faber tells Montag, “Men need the right to carry out actions based on what we learn from the interaction of the first two.” Montag was very impressed by the the way Faber talked to him. They talked about very important and meaningful things together. Faber became a very good and close friend of Montag and is aware that he is in hold of several books. He then becomes his partner in crime when it comes to keeping books a secret from Beatty.

Knowing that Beatty is going to burn Montag’s house, he sustains the pride as the old women did when Montag and his co-workers burned down her houses. He wasn’t letting anybody take away his new life. Montag is in more of a survival mode, he feels he has to protect what is his. Meanwhile, Montag kills Beatty as he tries to burn down his house. Though he says it was an accident, deep down you can tell that Montag wanted to kill Beatty secretly. The end of the novel shows how Montag is changed throughout the story.

Montag is like us in our stages of life because we both know what we did wrong and what we did right. We also change the same way. Guy Montag a character in the novel Fahrenheit 451, is a changed man. Although it might not be in a positive way, the reader got to witness, step by step how Montag evolved. Whether it was through his marriage, his job or just himself as a whole. Montag is a new person at the end of the novel.

Theme of Importance of Books in Fahrenheit 451. (2021, Oct 05). Retrieved from http://studymoose.com/theme-of-importance-of-books-in-fahrenheit-451-essay 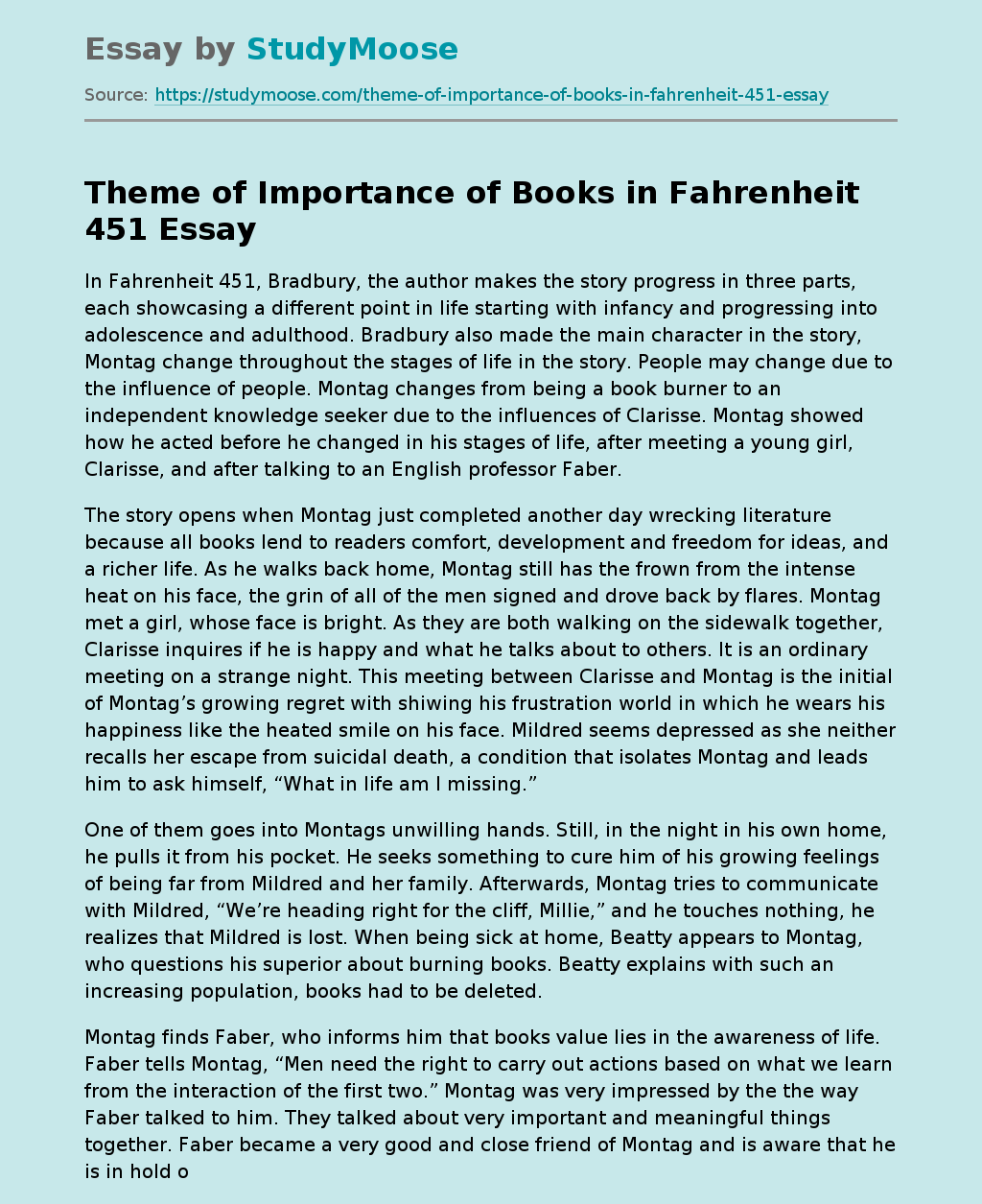