Poems are considered a form of art because a speaker always paints a picture in your mind when you are reading. Many poems have similar meanings but it is always how you interpret it. Poems are always full of hidden messages but they leave us to figure it out. In both poems “A narrow fellow in the Grass” and “ I died for beauty-but was scarce” by Emily Dickinson, she shows the meaning of truth by showing how someone can be untrustworthy which can appeal to both poems that concludes how people show their true colors at the end of the day.

Don't use plagiarized sources. Get your custom essay on
“ Theme in Emily Dickinson’s Poems ”
Get custom paper
NEW! smart matching with writer

In “A narrow fellow in the Grass” she tries to compare a snake to a human and refers to the snake as a “fellow”. The snake represents someone that is untrustworthy, nowadays people nickname someone that is untrustworthy a “snake” and to think that this poem was made many years ago and the culture continues to be the same. The speaker used many subliminal messages to explain that when someone is going to do you harm they will do it when you least expect it, on line 3 “You may have met him? Did you not”.

The speaker used alliteration on line 11 “But when a Boy and Barefoot”, she used the same consonant and uses the thought of a snake slithering across your feet is provocative and even just by thinking about it can cause people to be afraid.

Also the speaker mentions a metaphor in lines 13-16 “Have passed I thought a whiplash/Unbraiding in the sun/ When stopping to secure it/it wrinkled and was gone-”, the snake was thought to be a whip and when the speaker tried to pick up the whip but it slithered away.

The speaker was tricked by the snake. Symbolism was also used by the speaker in lines 21-24 “But never met this Fellow/ Attended or alone/ Without tighter Breathing/ And Zero at the Bone”, she uses “tighter breathing” to describe that every encounter with the snake brings fear or panic.

In “ I died for beauty-but was scarce”, The speakers’ deaths are described as they are buried in ‘adjoining’ rooms and are ‘brethren’ and ‘kinsmen” which are in lines 4,8,and 9 .These descriptions also make it clear that they are not identical neither their death otherwise they would have some type explanation that can be irony or straight forward.I can make an inference of how they are buried in the same room or “casket”and they might be possibly for them to be twins or even relatives.The question ‘why I failed?’ makes the audience look beyond the poem and actually start critical think.

The moss covers their lips and their names on their grave which makes you imagine it come to a conclusion that’s they have been forgotten death has ended all communication and effectiveness. With this image Dickinson shows the powerlessness of the human condition and the indifference of nature to human beings, who are forgotten at their death. The speakers are never named they are anonymous. It is ironic that the only life in the poem is the moss. 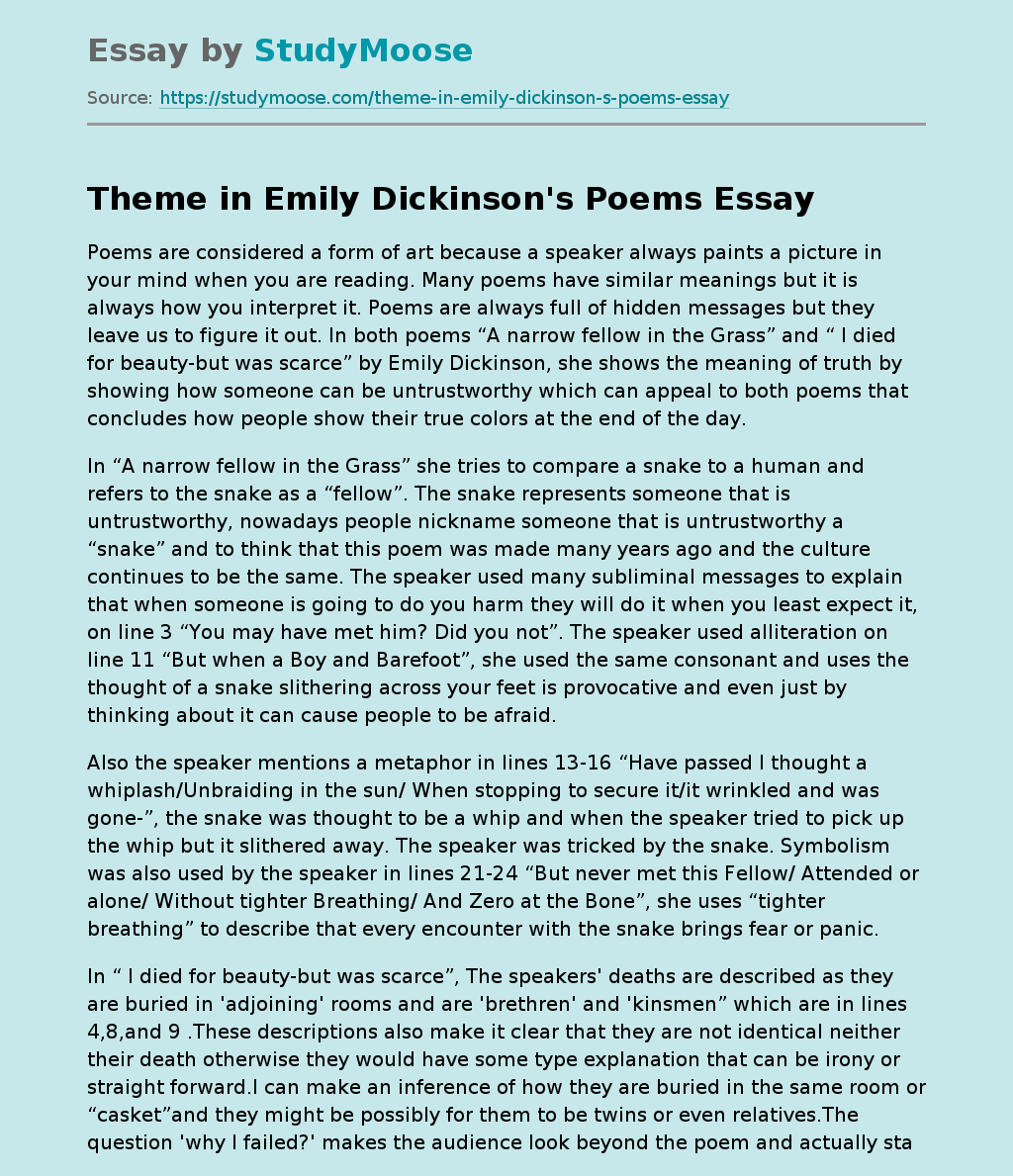