An exercise that asks the actor to re-experience, through the use of first-person narrative, a specific moment in their life that can then be remembered and used onstage in a play that has a similar emotional situation is called an Emotional ______________.
Recall
Who is considered the first important Greek dramatist, and thus the first important Western dramatist?
Aeschylus
The works of ________ likely influenced Shakespeare’s Hamlet.
Seneca
A ________ dramatizes a series of biblical events.
mystery, or cycle, play
A ________ uses religious characters and religious themes to teach a lesson.

Get a verified writer to help you with Theater

HIRE verified writer
Theatron
In ancient Greece, the person who functioned as a modern-day producer, paying for all aspects of the production and helping oversee its success, was called the _______________________; he was even expected to pay for a feast if his play won!
choregus
Which of the following was NOT a function of the chorus in a Greek play:
To sell merchandise to the audience between acts of a play
The first reappearance of drama in the Middle Ages were several plays written by a nun in a convent, although they were never produced. Her name was:
Hrosvitha of Gandersheim
The scene-shifting method of changing wings and back shutters via one giant winch underneath the stage that was developed by Italian Giacomo Torelli is known as the
pole-and-chariot system.
Which of the following was NOT a category of personnel in an Elizabethan acting company?
yard
Italian commedia dell’arte had no set text; it was improvisational.
True
English acting companies would rarely perform the same play on two consecutive days.
True
. Each character in commedia dell’arte uses a variety of _____________, repeated bits of comic business, like doing a somersault and not spilling a drop of wine.
Lazzi
Stansislavski observed that gifted performers always appeared to be fully concentrated on some object, person or event onstage
True
Which of the following is NOT one of the neoclassical ideals of dramatic unity?
Unity of Character
Critics were more influential than playwrights in formulating dramatic rules during the Italian Renaissance
True
. The Italians in the Renaissance are credited with creating the “pit, box and gallery” audience configuration
True
The scenery moving design called the ______________ System featured painted scenic flats that could be pushed on or off stage via slots in the floor and support from above.
Groove
Known for his early skill using iambic pentameter, this Elizabethan playwright’s “Mighty Line” ended when he died in a bar brawl at the age of 29.
. Christopher Marlowe
The first reappearance of drama in the Middle Ages were several plays written by a nun in a convent, although they were never produced. Her name was:
. Hrosvitha of Gandersheim
The most influential playwright of the French Renaissance was _________, excelling at slapstick and subtler comedy in his plays, which are still frequently performed today.
Moliere
In Elizabethan theatre there was so little time for rehearsal and so many plays to learn that actors were often only given _______________, the portions of the script containing only their character’s lines and cues.
sides
The most popular style of play in Restoration England was the Comedy of __________________ which made fun of the upper classes, especially their obsession with reputation.
manners
The stage architecture of Restoration English theatres was unique because:
The stage was divided into two equal areas in front of and behind the proscenium
German playwrights of the 1700’s created the _____________und Drang (Storm and Stress) movement which rejected the neoclassical ideals and paved the way for Romanticism.
Sturm
From 1690 to 1787 the most influential scene designers and architects came from one extended Italian family, ______________.
Bibienas
Stanislavski believed that all action onstage must have a purpose
True
Besides being a very famous British actor, ____ was also a partner in the Drury Lane theatre, where his work helped define the future role of the director in modern theatre:
David Garrick
The period from 1800 to 1875 was the high point of public devotion to theatre; theatre was literally a popular entertainment during this period
True
Theatre was so popular in the nineteenth century that several theatre riots resulted from audiences’ passion
True
. ______________________, which literally means “music drama”, was an escapist form that featured spectacular scenic effects and hair-raising plot twists.
melodrama
The famed opera composer _______________ is credited with being one of the first directors, unifying his productions and promoting the illusion of reality in theatre
Richard Wagner
Named for the famous actor who built it, the ________________ Theatre is credited with being the first modern theatre in New York City, with orchestra seating with individual seats and new machinery for flying in set pieces.
Booth Theatre
Vsevolod Meyerhold is associated with which theatrical movement?
theatricalism
. Stanislavski believed that unwanted vocal and physical tension was a good thing because actors need to be rigid and inflexible
False
Antonin Artaud is associated with which theatrical movement?
theatre of cruelty
Waiting for Godot is probably the most famous realistic play ever written
False
Edward Gordon Craig’s Unit Set greatly influenced leading twentieth-century American designers.
True
Which playwright is considered the founder of the modern realistic theatre:
Henrik Ibsen
Known for producing the early works of Chekhov as well as Stanislavski’s acting system, Russia’s _______________ Art Theatre was the most influential independent theatre of the modern theatre.
Moscow
During the Great Depression, the Works Progress Administration helped limit theatre to a few select cities.
FALSE
Some critics contend that Tennessee Williams and Arthur Miller write a kind of _______________ realism, heightening certain details of action, scenery and dialogue but ignoring others.
Selective
Adolphe Appia’s and Edward Gordon Craig’s use of suggestive settings, levels and platforms and extensive lighting are still influential today.
True
With sets that resembled giant Tinkertoys, Vsevelod Meyerhold trained his performers in a machine-like physical performing style called _______________________, using techniques from commedia dell’arte, the circus and vaudeville.
Biomechanics
Bertolt Brecht created the form known as _____________ theatre, a sprawling, episodic form whose main goal was to instruct the audience.
epic
A combination of Existentialist philosophy and avante-garde theatrical practices, Theatre of the ________________ points out the nonsensical nature of life.
Absurd
The goal of ___________________________ theatre is to recreate the spatial arrangement of the audience and performer to suit every play.
Environmental
Among his other achievements, scene designer Josef Svoboda also pioneered the use of multimedia in his designs, elements of other visual media combined onstage.
True
. Today the modern trend in directing is __________________, which is a willingness to draw from and use any theatrical trend or work in a production, as long as it helps illuminate the production.
Eclecticism

Get a verified writer to help you with Theater 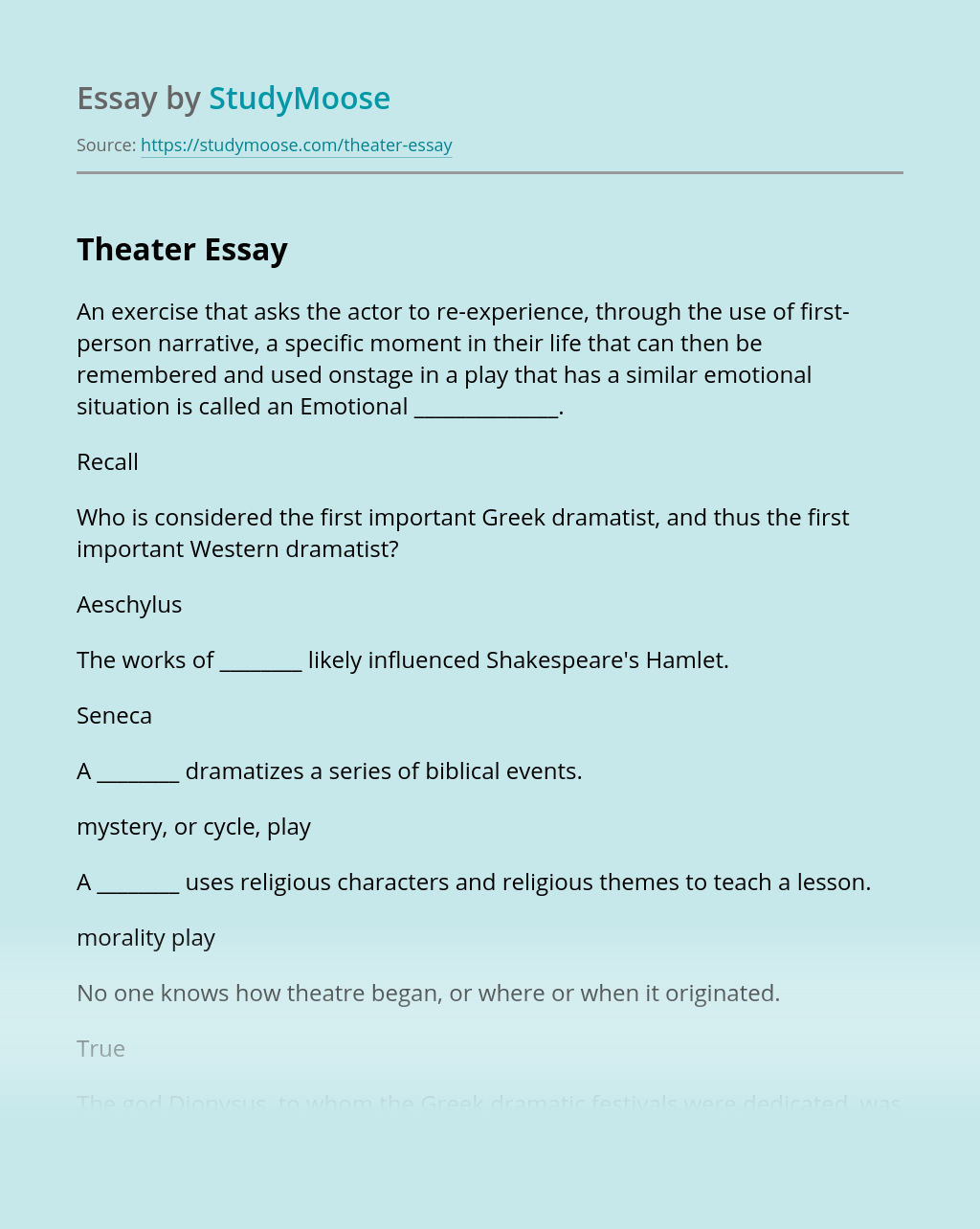 The play being discussed in this critique will be Metamorphoses written and originally directed by Mary Zimmerman. The URI Theatre department produced its own version directed by Steven Raider-Ginsburg. It was performed between the dates of February 21-March 3, 2013. Costume design was by David T Howard, Scene design by Patrick Lynch. Lighting design was...

Brecht and Stanislavski notions of acting

Bertolt Brecht and Constantin Stanislavski are regarded as two of the most influential practitioners of the twentieth century, both with strong opinions and ideas about the function of the theatre and the actors within it. Both theories are considered useful and are used throughout the world as a means to achieve a good piece of...

Get Essay
Elements of Drama

The Essential elements of drama are present in any play that you see, but the ideas have changed slightly over the years. Aristotle was the first to write about these essential elements, more than two thousand years ago, yet we still discuss his list when talking about what makes the best drama. Aristotle considered six...

Naturalism is a movement in European drama and theatre that developed in the late 19th early 20th century. This refers to theatre that attempts to create a perfect illusion of reality through various dramatic and theatrical strategies and technique. Very detailed three dimensional sets play a key role in this style of drama. This brought...

There were few men who were seen as key figures in the 20th century in terms of furthering the actor’s technique, and Jerzy Grotowski was one of them. Grotowski was a Polish theater director and innovator of experimental theater, the “theatre laboratory,” and “poor theatre” concepts. On August 11, 1933, Grotowski was born in Rzeszow,...

Augusto Boal and Jacques LeCoq have both had significant impact on theatre, and their philosophies and practical training have allowed their actors to be well-equipped for production. The philosophy of Boal, that anyone can act, and using theatre as a tool of political activism, and the philosophy of LeCoq, on bringing back the emphasis on...

The play the "Odd Couple" by Neil Simon