The year 1763 in american history

From the very beginning the American colonies were a revolutionary force waiting to be unleashed. Though there were many things that led up to the American Revolution many historians think that the events that took place in the year 1763 were huge turning points in the road to the revolution. The year 1763 changed the way a lot of colonists felt towards England and vise versa. There were Many things that took place in 1763 I will talk about three of them, The French and Indian war (also know as the Seven years war), The British Mercantilism and taxes, and the intolerable acts along with some other laws past.

Don't use plagiarized sources. Get your custom essay on
“ The year 1763 in american history ”
Get custom paper
NEW! smart matching with writer

The events that took place in 1763 were turning points that led to the American Revolution.

The English and the French fought four wars against each other, the last and most important being the French and Indian war of 1754-1763. Both groups of people wanted to control the fertile Ohio River valley. The Americans, mainly Virginians, went into the disputed region to secure their claims.

They proceeded to fire the first shots that started the “globe-girdling” new war. Well, they got into full-fledged war both sides sending troops into battle. Early on the Colonies lost a lot of battles, needless to say they weren’t too pleased with that so the Albany congress was started, it wasn’t very successful but at least it aimed at colonial unity. Besides not being unified they had old cautious generals from Britain that weren’t used to the style of fighting that the French and the Indians used.

They continually lost battles until Britain brought forth a new general, William Pitt he was brilliant and almost as soon as he came into the picture the colonies had won the war.

By The treaty at Paris (1763) the French were completely thrown off the continent and the French’s ally, the Spanish, had too give up their Florida colony leaving the British the only power in North America. The after math of the war was really what affected the Colonists view of England. They gained confidence in their military strength because at first they had fought all alone, and then along side the British regulars. The war crushed the myth of British invincibility. Also the colonists didn’t like that after the war the British army down played their role in the end of the war. They even demoted people who were less then captain in rank. Well now that they enemy was all out of they area one would think they could have free roam… but out of the blue the British passed the proclamation of 1763 limiting the westward travel to east of the Appalachians. They felt that they had won the right to expand so they went west anyway. The Effect the French and Indian war had on the revolution was very important but it wasn’t the only thing that pushed the colonists towards it.

The French and Indian war; also know as the Seven years war, while the British were victorious, was very costly. They were left in a lot of debt. They believed in the theory of mercantilism, it was the belief that a colony should be there for the good, and wealth, of the mother country. When the Americans started the war and made England pump money into the colony it went completely against that belief. They wanted the Americans to help pay that enormous debt that means taxing them. The Americans were not used to these taxes so it really made them mad. Well to regulate the Americans and keep the money flow to Britain they had to pass regulations the first set being the navigation law it was aimed at keeping the materials under British control and keeping the flow of money to England. They also Passed the Quartering act that said the colonists had to give house and board to the British military.

The same year the most hated act was passed, the stamp act. It made the colonists attach a stamp to things like legal documents, playing cards, pamphlets, etc… they hated the taxes because they saw them as trying to take their beloved liberties away. They went into protest and started to unify against the taxes, they cried “no taxation without representation.” They started the nonimportation agreements against British goods and that hurt British shipping so they repelled the stamp tax and the Americans were happy. That is, until the Townshend tax it put a tax on things like lead, paper, paint, and tea. The Americans were in a rebellious mood because of winning the stamp tax ordeal so they tried again, it lacked the previous fury though. The Boston tea party happened while people were protesting. Again the protest worked and the tax was lifted. but the tax on tea remained. That led to the Boston Tea party. Where 342 crates of tea were dumped in the ocean. Yes all those taxes weren’t that bad but to people who weren’t used to them I guess they were.

After Dumping all that tea the colonists had to be punished. So Britain passed a series of laws that were aimed mainly at Boston, they are known as the intolerable acts. The most Drastic of the laws was the Boston port act it closed the huge Boston port until the damages were paid for. They put other restrictions on to. It took away many of their rights, their town meetings were taken away and now people who committed crimes were sent to Britain for their trial. Around the same time as the intolerable acts were passed the British pass the Quebec Act. It gave the large amount of French Canadians religious toleration and it gave them all the land south of Quebec to the Ohio River. The colonist hated the Quebec act all the other intolerable acts were mainly put in effect on Boston but that one affected all the people.

The people felt bad for Boston the British had gone too far. They summoned the continental congress there they made up ways to report their grievances to England. They made the Association that called for a complete boycott, they didn’t buy anything, they did sell anything, or didn’t use anything that had to do with Britain. They didn’t want to break free just yet the drive for war didn’t kick in until the British didn’t listen to the complaints. The people went crazy tar and feathering people who didn’t go along with the association. British troops marched to Lexington and concord to seize gunpowder and to capture Sam Adams and John Hancock. The minutemen were called up and the shot heard round the world was fired.

The year 1763 started all of that; it was a year that totally changed the world. If the events that took place during that year didn’t happen we might not be the same country and wouldn’t have this great place to live and be a part of. In my opinion the three things that really pushed us to revolution were the French and Indian war, the British style of governing, and the intolerable acts. 1763 is an important date in American history it paved the way to revolution. 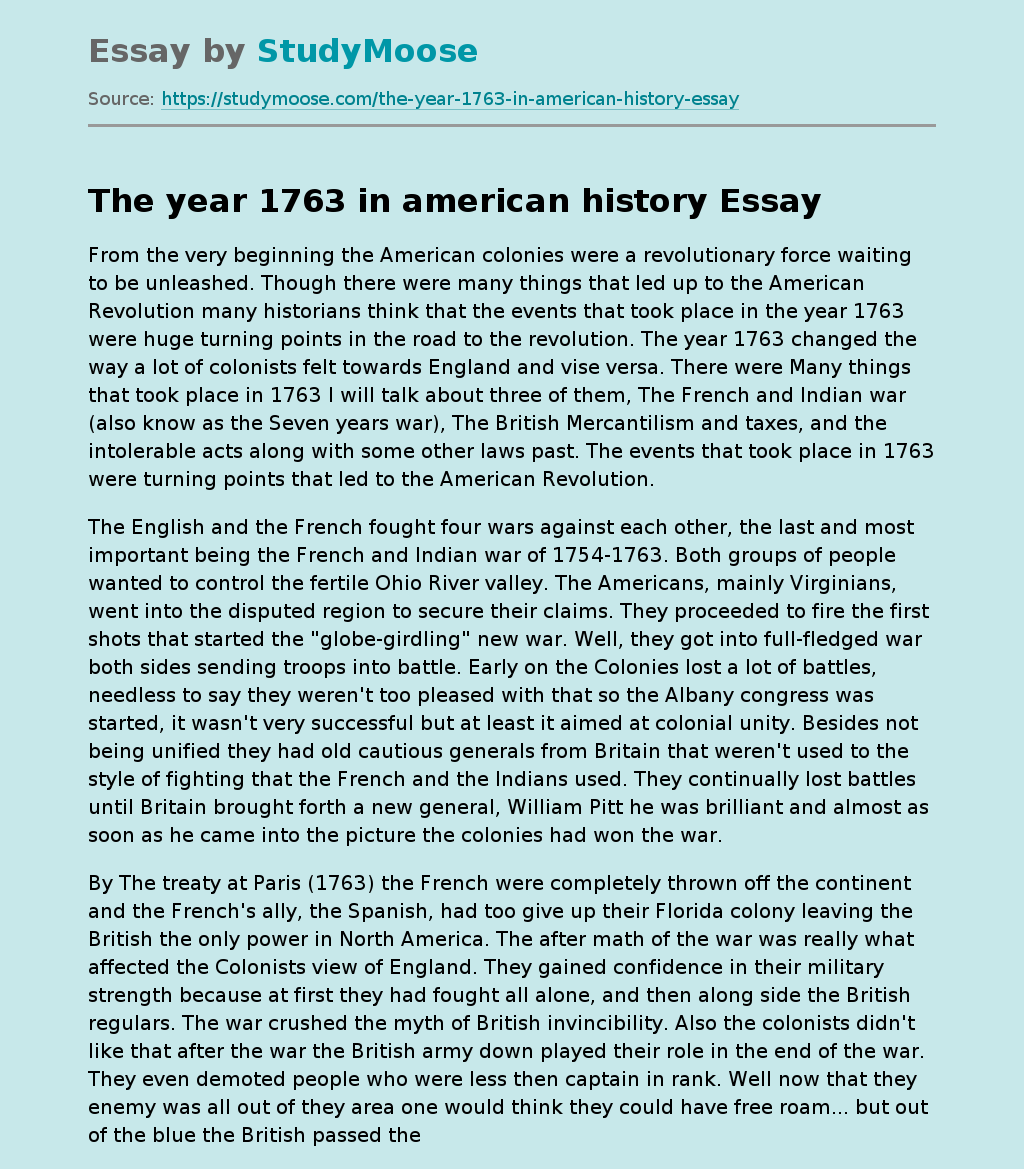