The world of psychology

These theorists have had amazing theories. They all have made a big and individual contribution the field of psychology. William James, Carl Rogers, Sigmund Freud and Wilhelm Wundt have all brought something to this field. Every one of these psychologists have a different theory and some were based off other theories.

William James theories was based off natural evolution. He was the first American psychologist and is the father of Psychology and first creator of the experimental psychology laboratory at Harvard.

Don't use plagiarized sources. Get your custom essay on
“ The world of psychology ”
Get custom paper
NEW! smart matching with writer

Nature of volition was one of the any things he was looking into. From these studies brought him to “James’s unorthodox scientific pursuits, from his experiments with nitrous oxide and hallucinogenic drugs to his investigation of spiritualist mediums.” The attempt of hard problem that was brought on the brain. As a student he read many chemistry and physics books and that was what made him interested in what is called energy and force which is developed in the concussions in which he ended up writing more in depth about in his journals.

James persistently defended the scientific study of what he termed the “wild facts” of human subjectivity in his journals and to the science community. His investigation of the idiosyncrasies led to him saying that the concussions is influenced by a personality on individual free will and volition. We learn in this article that he has much in common with elder German physicist Gustav Fechner in a personal and work setting. He was the first who founded psychophysics, a “new field that undertook the empirical measurement and correlation of brain states with sensory experience.

” They both had grown up with very regions fathers, studied natural science, both ended up professors in fields where neither had taken a doctoral degree. Fechner became a professor of physics at the University of Leipzig, while James became a Harvard professor of philosophy and psychology on knowledge independently earned of obsessive reading in natural science, philosophy, and brain physiology. They both were going off the Darwin theories of evaluation. We also learn that James theories were inconsistent but they stated in his journals’. Energy and forced had played into “James theories. In the early twentieth century, philosopher’s displacement of the natural scientist as an authoritative public spokesperson for secular values played an essential role in the modernization of American intellectual life.” This brought volume two of “Principles of Psychology”. This bring problems that he had to overcome. Epistemological and methodological problems were related to the identifying of the interior states of consciousness correspondence. This is one the theory he contributed. This appealed to me because he is basically saying that human brain is complex, but we still have the power of free will. Our choice for us and us alone. We can choose by our own will not anybody else. He also was able to balance out being a professor at Harvard and a researcher and inventor. He left all these notes behind so we could learn everything he learned. He argued about theories of concussion and went off and did his research and made up his own theories. James was a visionary and a go getter, and it shows in a lot of his work because he fought and argued with people about his theories but still stuck to them no matter what.

Carl Roger developed the new model “psychotherapy which espoused a client-centered rather than a therapist-centered “approach to the public eye. He took humanism to the next level. These idea of have disseminated through many models of new teaching and learning methods did including “student-centered learning, problem solving based learning, experiential education, self-directed learning, humanistic education, re?ective learning and active learning.” The signi?cant numbers of these models have been developed and farther tested in “student centers learning (SCL) and problem-based learning (PBL)” in higher education settings. Rogers empath principles had a positive impact in his article of condition appropriate personality change in therapy. Educators have developed (based off this method) methodologies ways in teaching in the higher of education based settings based. Then model the Person-Centered Approach (PCA) tried to encourage models in an application to all interactions between individual and their theorist. One thing roger argued about was “One of the most prevalent misunderstandings of a person-centered approach [·] is that it is applicable only in certain kinds of subjects or in certain special situations”. He had goals for education to be improved. Making a fully functioning a person’s character by the ability to be self direct and self-actualize and for them to self-actualize through thinking for themselves and learning through self-direction. He did find a problem in his model which is the soft approach which discourage critical learning. This whole article was talking about his development of his principles. What he got and some of the things some educators modified. What attracted me to him is the fact people still use his work today but just make their own personal twist to it. He always made improvement to better farther education. This characteristic had a role in it because he always believes in growth. He married someone his parents did not like and had two children. When you have kids, you want the best education and everything for them. I think the fact he had children really made him want to improve education not just for his children but all children and adults. For them to have a good education they must be challenged in a way what will help improve problem solving.

Sigmund Freud was an Austrian neurologist and the founder of psychoanalysis. Freud had challenging assumptions in his early writings have no place in the current discourse on child sexual abuse, this article reconstructs Freud’s early treatment of Emma Eckstein. Emma’s account of childhood sexual abuse in the context of Freud’s early therapeutic practice revealed. Freud first formulated his radical theory is that his patients’ “psychoneuroses” were due to them having been sexually traumatized children hood experiences. For this theory is that how widely known that for a short time in his early career Sigmund Freud publicly argued about the passion that his male and female patients had was the obsession of paranoia of childhood sexual trauma and how they handled it. He was is saying sexual abuse, abandonment and any other childhood trauma is always there even as adults. We never really get over the trauma that has happened to us as a child. Freud did a study with a women name Emma Eckstein. He tried to find what illness she said from this. He made her lay back and closed her eyes and relax. He asked her to remember some of her childhood traumatic experience. “Freud is a specialist in nervous diseases and contribute little or nothing to contribute to the current discourse on child sexual abuse by offering an historical reconstruction of some of the “developmental episodes””. He while examining Emma “the intolerable idea,” that had come about was he did not want to ensure that its way back into her consciousness and overwhelm her. She was staring to get nervous like she was reliving the trauma all over again. When this started happening he would encourage her to answer the questions by taking her head between his hands and pressing lightly on her temples. By the end of what happened “Freud, in his experience the etiology of a trauma which had caused a neurosis had “to be searched for in sexual elements,” and to this end he believed that Emma’s psychoneurotic symptom, her abdominal pain, “represents a substitute or surrogate for [the] intolerable sexual idea” which was associated with her trauma.” The is article is about how methodized the child trauma we expertise as a child and how that carries into adults adulthood. What attracted me to him was the fact he wanted to deeply understand why our childhood effect you day to day lives when we think it does not. Freud family was poor, and he was the eldest of eight children, but his parents made sure he had the best education. I think this affected him because he did not want this to happen to him when he got older. I think he had problems with growing up as a kid, so he though why not tries to understand it and that is what lead to his theories and reach. What makes Freud different from the other is more his theories have more retable affects towards if his life. This theory affected him more another theory.

Kurt Koffka was one of the main representatives of “Gestalt psychology of the theory that defended a phenomenological approach to perceptual consciousness understood as the primacy of the mental organization. Guestlists embraced dualism between the mental and physical realms.” Gestalt theory influenced ecological psychology in many ways; First, as shown in the previous section, the varieties of pragmatism and behaviorism in which Kurt argued with his partners about. Visual memories perceived forms are reproduced according to their principles. “Kurt Koffa attended the University of Berlin he spent a year at the University of Edinburgh. He experiences that perhaps made his later decision to leave Germany to live in the United States less difficult than it was for some of his colleagues.” When the Gestalt psychologists came to America, they founded the dominant of psychology that was no longer structuralism of Wundt and Titchener, but was proceed as behaviorism . They also founded that the same kind of criticism in which they had leveled against structuralist conceptions had applied also to behavioristic concepts. “In which they adopted to the atomism and mechanism of science as they viewed it over.” Gestalt were not use to the scientific method. Gestalt psychology took its model of the new conceptions of “field physics”. The article was about Gestalt got their theories and how and where they studied in Germany and in America. I think the fact he came from Germany had a role in it because he had to prove it to someone. He did really have a theory made up on his own. His theory was based off a whole other theory. What make him different is the fact Gestalt psychology took a model the newer conceptions of field physics and turned these facts into his theory of behaviorism. He did a whole 180 off the theory of humanism.

In conclusion all these theorists brought something big to the psychology community. Each of these psychologist theories are still used today even if we do not know it. Some brought own ideas, some did a whole 180 on a theory, and some where inspired by other people and books to start they theories. Each psychologist had a back story and they played a party in their theories and studies. If not for these people we would not be able to go things now or understand what we do now if for they psychologist theorist.

The world of psychology. (2019, Nov 14). Retrieved from https://studymoose.com/the-world-of-psychology-essay 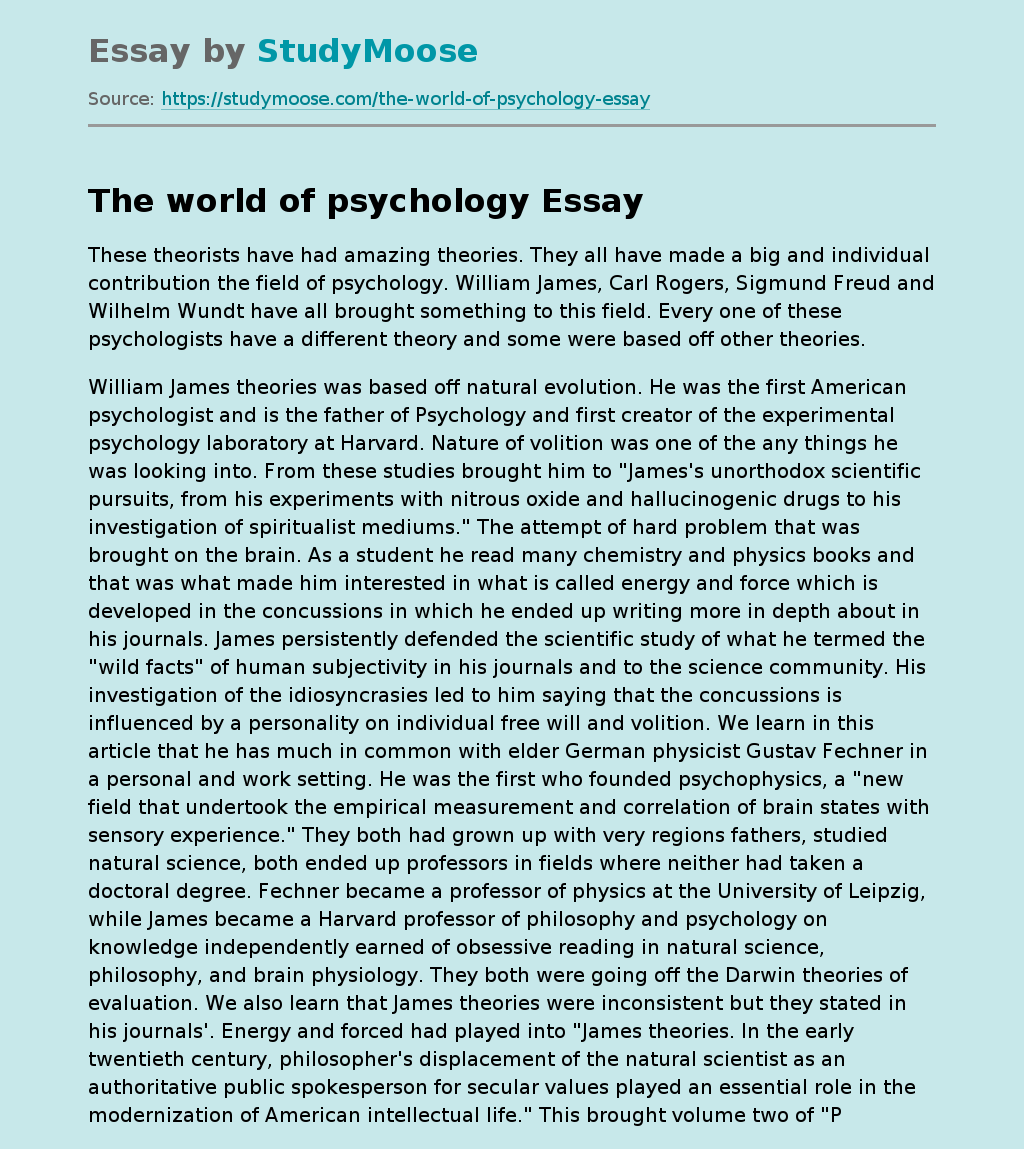