The world is large and it has different nations with different aspects and elements. There are some countries that cannot practice freedom of speech and freedom of press including Burma, North Korea, Turkmenistan, and Libya. However, unlike those countries, the United States is a democratic country which focuses on the rights and freedoms of people through the Bill of Right in the Constitution. The word freedom may sound simple, but it is very powerful and cherished. A word that an entire country was founded on; a word that symbolizes one of the most treasured concepts in the world.

Don't use plagiarized sources. Get your custom essay on
“ The world is large and it has different nations with different aspects ”
Get custom paper
NEW! smart matching with writer

But exactly what is freedom? If you ask hundreds of people, you will receive hundreds of different answers because every person has his or her own definition of this concept. Yet, there is no absolute accurate definition for this word. The word freedom may have many different ways of interpretations, but it always has the same basic idea. The dictionary defines freedom as the state of being free of at liberty rather than under any physical restraint.

The word free comes from a German word free means to love, to be loved and not in bondage. The suffix dom means a judgment and law is added to the word free as it makes the whole basic idea of freedom as not being bound by law, judgment or circumstance. In another word, freedom is the power and right to act, speak or think with the person’s will, and without being imprisoned or enslaved.

A common synonym for this noun is liberty, independence, and deliverance. In contrast, slavery is a state of being owned and the opposite of freedom is when a person may also lack personal decision as enslavement, immurement, imprisonment. Astrophysicist Andrew Galambos once said, Freedom is the societal condition that exists when every individual has 100% control of his own property. In other words, this means that society cannot exist without freedom. Of course, freedom is a vital part of humanity, one of the most greatest principles of mankind. However, according to Charles Kingsley: There are two freedoms ” the false, where a man is free to do what he likes; the true, where he is free to do what he ought. We have the ability to choose from a variety of options but at the same time, we must not jeopardize the freedom of others. For example, since one’s body is his or her own property, he or she is free to do whatever he or she wants. If he decides to smoke or take drugs, it should be his full right to do so, unless, that is, he does it around others without their consent. No country in the world wants to be ruled under the other or to have imperialism because freedom is the basic need of each individual, how each individual define himself or herself, and his or her pride of the nation. Viet Nam has a long struggle for independence and freedom. It has been ruled under the reign of China for over one thousand years, one hundred years being invaded by Frances and twenty years of civil war with the participation of United States. Vietnam is a small country while their opponents are strong and big. Viet Nam had a lack of opportunity to win any war with China, France, and the United States, Vietnam still won and became an independent country. But how ? It was all about the powerful meaning of freedom. People rather fight for their freedom than die as prisoners their whole life and the willingness to make their country become independent without any regulations of the others.The word freedom has been a battleground throughout the history of United States. Freedom is not free because the only way to have freedom is to seek and to fight for it. The American Revolutionary War (1775″1783), also known as the American War of Independence in which the people in 13 colonies fought for their freedom, the freedom, and independence of the English colonies. The British controlled the people in 13 colonies. The King of England put high taxes on the colonist and brought the army to force them to pay. Being forced to do something that others do not want to do is an irrelevance to people’s freedom. The colonists did not like this and wanted to be free from England. They stood up and fought for their freedom. In addition, throughout American history people have fought for causes in which they believe; one of these major causes was the emancipation of all black slaves within the United States. Black slaves lived in fear and insecurity. They were bought, sold, and suffered and tortured. They had no freedom; their freedom and rights have been taken away. How could life be life if there was no freedom ? Freedom is the oxygen of life – Moshe Dayan. The word Freedom is not just a word; it is the basic element of life and it is necessary for each and every person. This is why during the mid-1800s, Frederick Douglass and William Lloyd Garrison, the two greatest abolitionists emerged and fought for the freedom of all slaves. Many people had sacrificed to bring freedom for us to live a life like today. Freedom also means having the time to do things right. No freedom, in this case, would not be time for fantastic, clever thoughts. Freedom is the basic elements of human rights and a basic fundamental to built up a nation. Because of the desire to have freedom, the United States, Vietnam, China, Russia, Hungary, and Czechoslovakia,soon become independent. Especially in United states, Its emphasis on the freedom of each individual via the Bill of Rights ( the first ten amendments to the Constitution) such as the Freedom of speech, freedom of press and freedom of religious were important. However, those freedom have abode by regulations of the law. Without freedom, our society and country would be an oppressed nation and under a dictatorship. The freedom allows us to feel comfortable with having our own opinion and views on things. Because of freedom of religious, people have their own choice to practice any religious as they want. The United States has over twenty differents religious groups with nearly thirty-three percents as Christians (including Catholics, Protestant Eastern Orthodox, and so on), twenty-one percents are Islam, fourteen percents are Hinduism, six percents are Buddhist, and some other (according to Adherent diagram in 2005). The word freedom is widely used in society and every human has their own freedom. However, the true meaning of freedom is needed to be applied in every subject. If freedom is applied to humans, why are animals not included ? Wild animals are taken away from their natural home and locked in cages in the zoo. Humans are depriving animals freedom for their own good. Freedom should be applied to all creatures and every living thing on earth. In many ways, our society cannot survive without freedom. Humans are expressive species and if there is no freedom, we will be enslaved in their own body and cannot express their view and feelings. This concept of freedom has been fought for by many groups of people including Americans and is an ideal that is very dear to many people’s hearts. This basic word freedom is appealing to most cultures emotionally and is used very often in political speeches. Without freedom, humans will have no free to do anything and lose our true meaning of living a real life.

The world is large and it has different nations with different aspects. (2019, Aug 20). Retrieved from http://studymoose.com/the-world-is-large-and-it-has-different-nations-with-different-aspects-essay 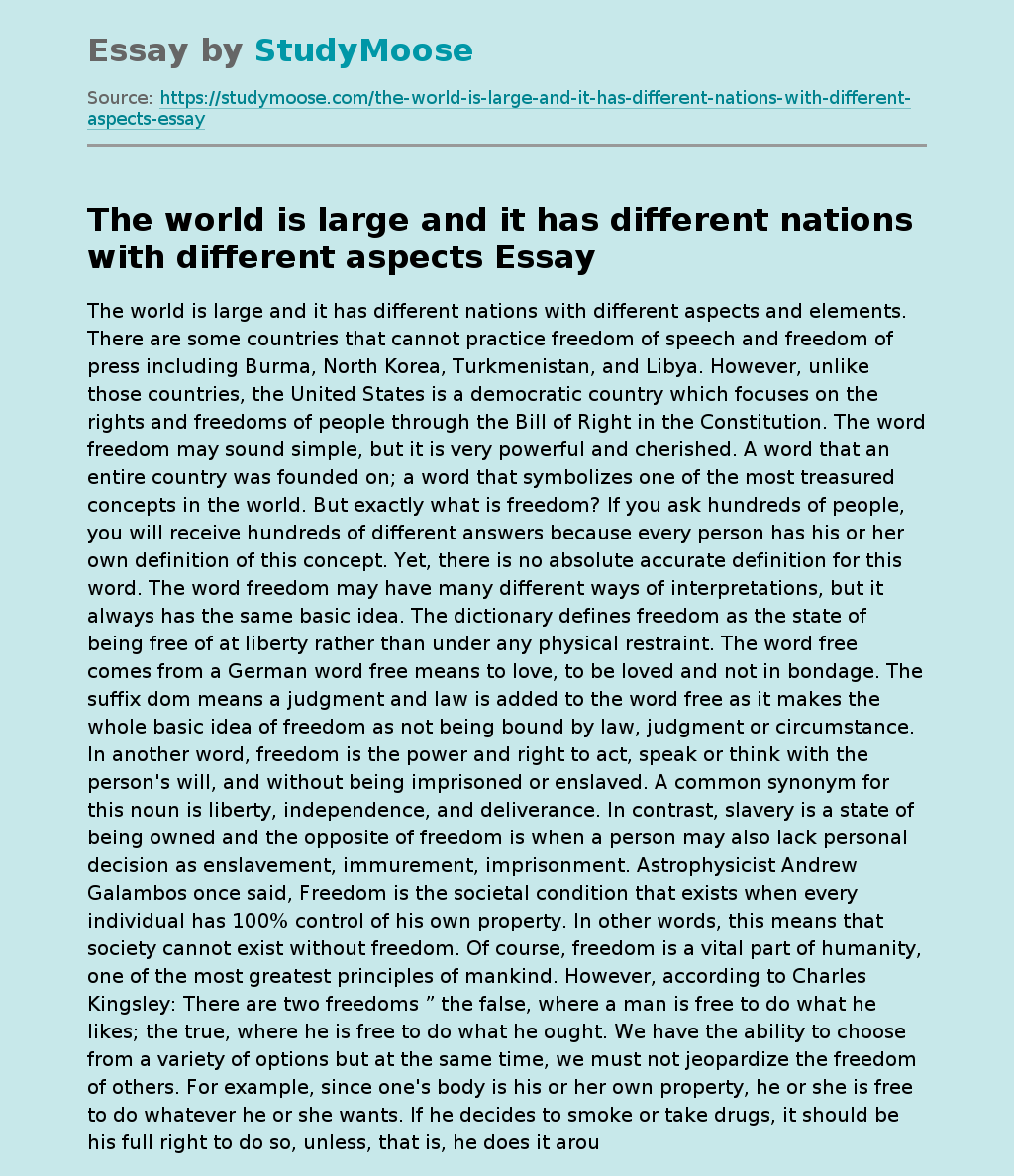