The Witches in Shakespere's Macbeth

In this scene you can actually see how evil the witches are. “A saliors wife had chestnuts in her lap. And munch’d and munch’d, ‘Give me’ quoth I. ‘Aroint thee, witch’ ,the rump-fed runnion cries. Her husband to Aleppo gone, o’th’Tiger: But in a sieve i’ll thither sail, And like a rat without a tail, I’ll do, I’ll do and I’ll do. The sailor’s wife with the chestnuts told the witch to get away and because it was belived by Jacobean’s that witches couldn’t kill humans, the witch had tired the sailor out by having sex wih him.

Don't use plagiarized sources. Get your custom essay on
“ The Witches in Shakespere’s Macbeth ”
Get custom paper
NEW! smart matching with writer

The witch made the ship sink by using bad weather and he made the witches sisters help.

The witches have a very strong bond. This justs shows how evil the witches are. The witches referred back to the plague. “And like a rat without a tail”. Shakespere used direct speech for the witch.

It got acted out by one witch to make out hat it was real. Shakespere used stuff that was top headline in the newspapers at the time shakespere wrote the play. He used the ship o’th’Tiger this was a ship that sunk as shakespere wrote his play so he he put it in his play to make it more realistic for the Jacobean’s. Shakespere mixes fact and fiction together this makes it more beliveable and might marish for the audience.

He uses the o’th’Tiger in his play thuis is part of the contrast of fact and fiction.

The ship sunk as Macbeth wrote the play, so that is why macbeth uses it in his play. Everyone would have known about the ship so that makes it more beliveable for the audience. The witches were believed to be able to see into the future, this is supernatural. In the play Macbeth gets told he will be Thane of Cawdor and Thane of Glamis by the witches- this just shows how powerful they are. The significance of Macbeths first words are that the witches have already said them it’s like Macbeth is echoing there words.

The witches words are in his mouth. We now associate Macbeth with the witches and their evil. This echo introduces the idea of a propecy and promts the question: Is Macbeth in control of his own destiny? Macbeth and Banquo’s descritio n of the witches is: “How far is’t called to forres? What are these, so wither’d and so wild in their attire, That look not like th’inabitants o’th’earth, And yet are on’t? – Live you, or are you aught that man may question? You seem to understand me, By each at once her choppy finger laying upon her skinny lips; you should be woman, And yet your beards forbid me to interpret That you are so”

This is what Banquo says about the witches. He questions them. H e asks them wether they are dead or alive and he asks that are they humans that they live on this earth and asks can they understand him. He is trying to take control of them. The minute Banquo sets eyes on the witches the convosation changes. Banquo says that the witches have long boney fingers. Shakespere enthesises that the witches are so different to all human beings. Shakespere describes the witches in great detail. It paints a image of them in our minds. You can hes not a modern director. Macbeth says to the witches:

“speak if you can: what are you? ” Macbeth is already trying to control them. Macbeth is confused and unsure of what they are. The witches predictions have a huge impact on Macbeth and Banquo. The witches predictions are: “All hail Macbeth, hail to thee, Thane of Glamis. ” “All hail Macbeth, hail to thee, Thane of Cawdor. ” “All hail Macbeth, that shalt be king hereafter. ” Macbeth and Banquo are really shocked at these predictions. They know that there are two kings on the thrones and they are doin great jobs. Then they both start asking loads of questions this adds to the confusion.

Banquo doesnt even know if they are real. Macbeth and Banquo are really shocked and Macbeth thinks that he can control the witches. Then the witches go on and tell Baquo that his children will be kings. Then Macbeth tries to command them again. So to show him that they dont get commanded they disappear. When the first prediction comes true then thats when the evil starts to happen. The evil steps into place the second the first prediction comes true because from there Macbeth’s ambition takes over. So now that we know that the first prophecy has come true.

Macbeth has immediate proof that the witches know the truth. They’ve got him- Macbeth is under the witches spell. From now on, their words will always be in his thoughts. We only see them once more, but the witches are always present in Macbeths mind. In Act 4 Scene at the witches’ haunt, the weird sisters and Hecate are busy preparing the potion that will bring about Macbeth’s ruin. Macbeth enters and asks to speak to the witches’ masters about the future. An apparition takes the form of a helmeted head and tells Macbeth to beware the Thane of Fife (Macduff).

A second specter appears in the form of a bloody child. It tells Macbeth to be brave because “none of woman born” can kill him. Then, a third spirit emerges in the form of a crowned child with a tree in its hand. It tells Macbeth that he shall never be vanquished until the Great Birnam Wood travels to high Dunsinane Hill. Macbeth becomes relieved, because he laughs at the idea of trees moving. As a final question, Macbeth asks the witches if Banquo’s sons will ever reign in Scotland. Eight ghosts with crowns emerge, who represent the future sons of Banquo. 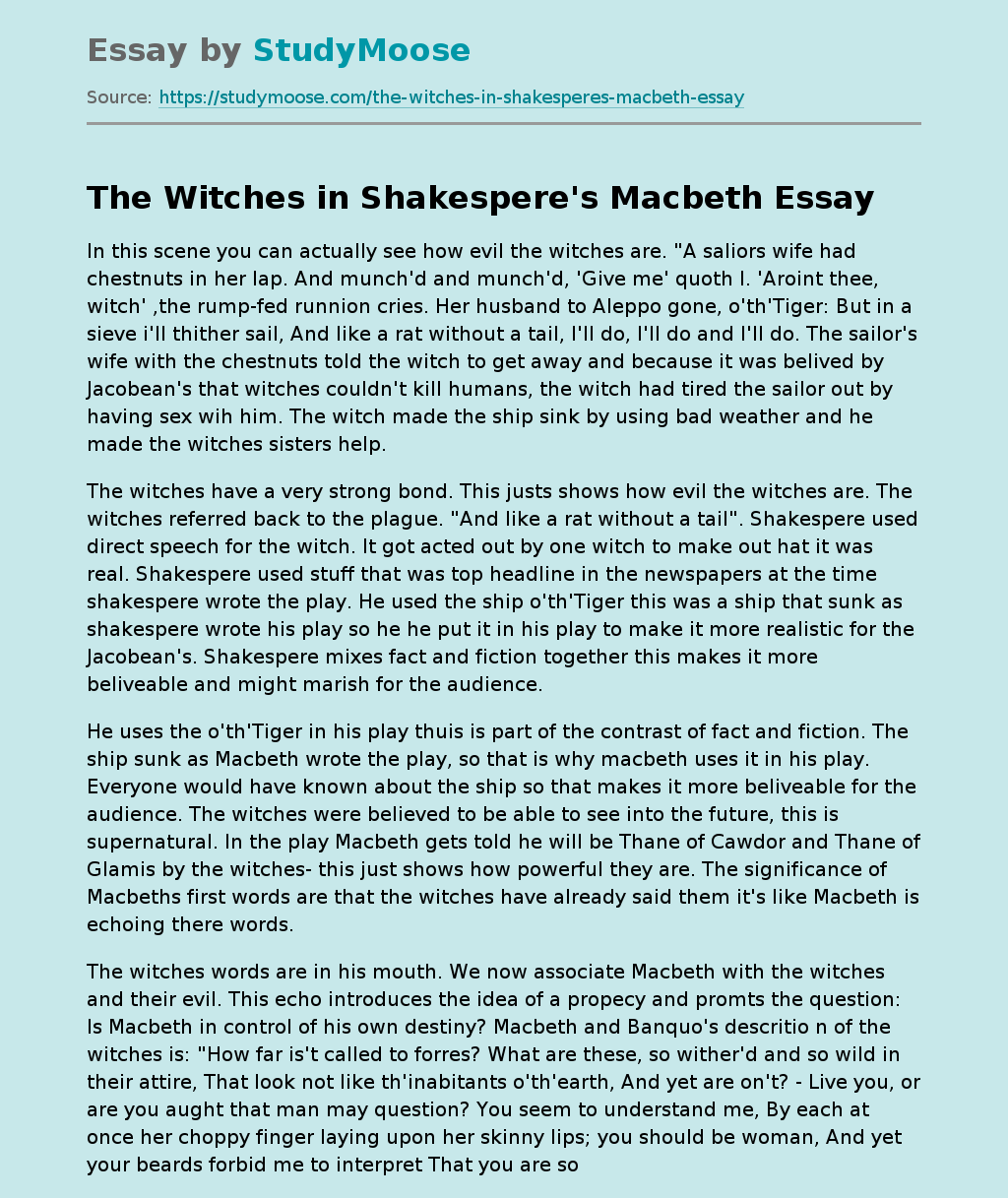