We as humans have learned to be considerate of people and their differences, we have also encouraged the development of all human beings. But many years ago people were not considerate of people of other ethnicities. The possibilities for everyone have become more equal during modern times. I have been intrigued by the racial and ethical dilemmas that most of our ancestors had to endure. The short story that I have chosen to discuss is “The Welcome Table” By Alice Walker.

Don't use plagiarized sources. Get your custom essay on
“ “The Welcome Table”: Racial Issues ”
Get custom paper
NEW! smart matching with writer

The human race has come so far since we have had such severe racial discrimination, although it has not disappeared completely.

The Welcome Table”, along with many other new age stories really have shown the importance of acceptance of many ethnicities. Point of View The theme of a story is a representation of the idea behind the story. (Clugston 2010). “The Welcome Table” written by Alice Walker, is about an old African American woman who attends a white community church. This story is told in omniscient third person point of view.

Third person point of view occurs when the speaker is not the participant in the story. (Clugston 2010). On her way to church, she received looks of horrible disgust.

People felt sorry for her, and they feared her. She walked into the church, and she was immediately the center of attention by the congregation. It was made clear to this elderly lady that she was not welcome to worship with this church. She wanted to be in the house of God, she also needed her time with a higher power, and those rights were stripped from her for being from an African American background.

She left without a fight; God immediately approached the old lady as she left this church and they walked off together.

Walker shows us how important skin color was to people back in this time in history. Not only were they segregated, it was not considered wrong to decline services to those of a different ethnic background. Walker uses a third person point of view in telling the story. She switches points of view throughout the story and really emphasizing the theme of the story. As she walks into to the church Walker is speaking from the congregations point of view, then to the ushers, then to the white congregation.

Character She was angular and lean and the color of poor gray. Walker 2003). She was dressed in her Sunday meeting clothes. She wore a long mildewed rusted black dress with missing buttons and a grease-stained scarf covering her pigtails. She has blue-brown eyes, is ashen in appearance and very wrinkled. She is sweating from her walk and is shivering from the cold. She enters the white church and sits, singing in her head. She is physically thrown out of the church. She sees Jesus walking down the highway and is giddy with joy. Jesus tells her to follow him and she does, walking alongside him.

He looks just like she thought he would, and he listens to her sing and talk to him. He was wearing immaculate white, long dress trimmed in gold around the neck and hem, and a red, a bright red cape. (Walker 2003) Over his left arm he carried a brilliant blue blanket. He is wearing sandals and a beard and long hair parted on the side. (Walker 2003). She feels great beside him and can walk as long as he wants. She tells him about her hardship works for whites and the injustices that have taken place . She feels his kindness and instantly feels better.

The old elderly woman saw Jesus wave to her. He told her to follow him. She broke her silence to tell Jesus how glad she was that he had come, how she had often looked at his picture. They continue to walk together. The ground began to look like clouds. They continued to walk looking straight ahead, she had a smile on her face. Conclusion “The Welcome Table “is told in omniscient third person and shifts the point of view from which the story is told. The beginning of the story is told from the point of view of the white congregation. They view the elderly black woman as being beneath them.

She receives evil stares as she enters the church to seek Jesus. She feels her time on earth is coming to an end. She is treated badly because of her ethnic background. The usher then asks the elderly woman to leave the church. The women in church feel threatened by the aging woman because of the color of her skin view switches to the usher who tells the elderly African American woman to leave. The men in the church carry the elderly woman out of the church. The woman then sees Jesus walking down the highway. She walks along with him and she is never seen again. 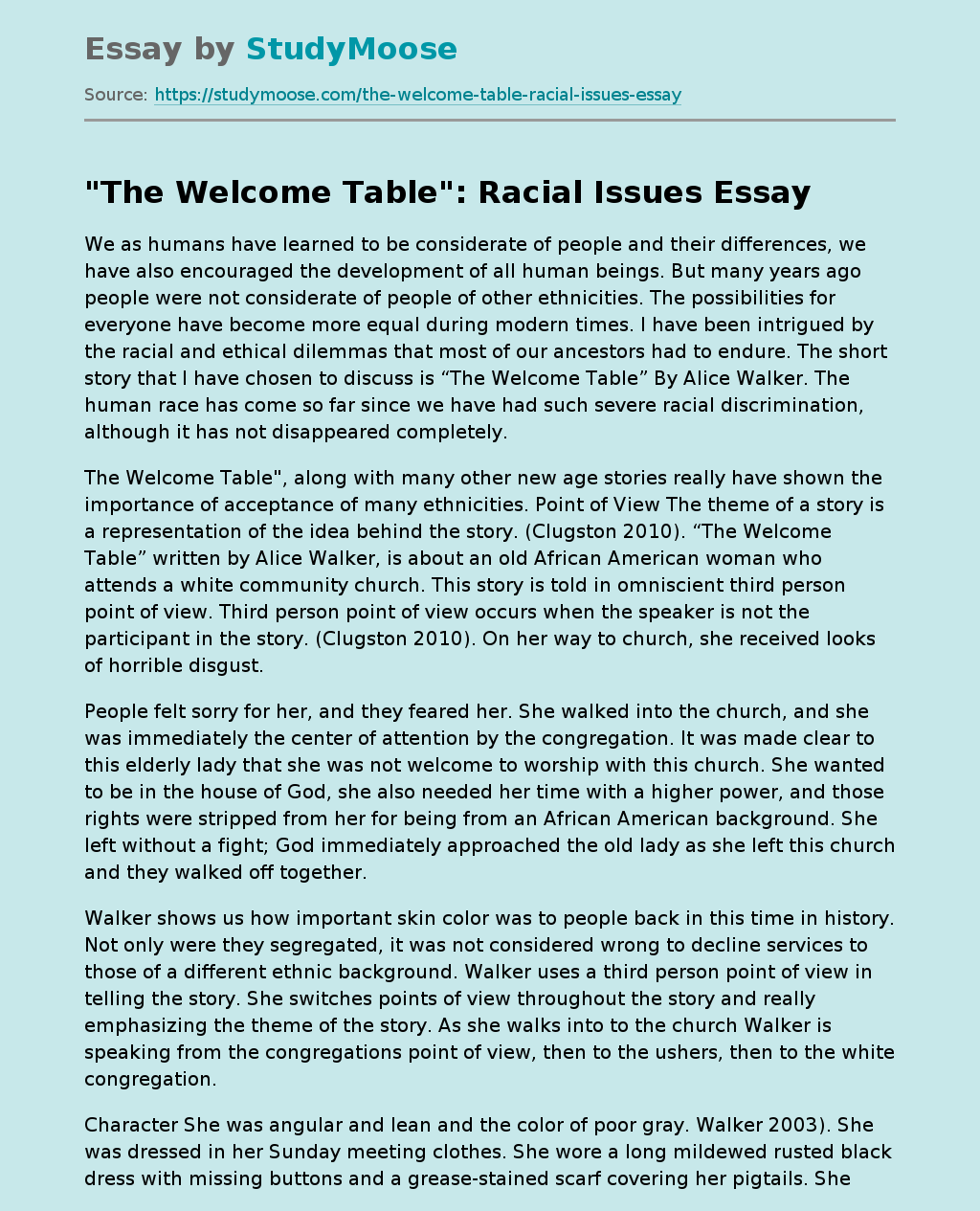