The Weakness of Bravery

“In a stadium filled to capacity, past capacity.” (Patterson 1) Millions of eyes staring heavily at us, silence fills the air. In the book Witch and Wizard, James Patterson created a constant, but hard to comprehend theme One’s Bravery, can be another’s weakness. 3 events in this book that show this theme are, (PG. 72-73) Where Whit had been stirring up an argument with someone who in the book was known as “The Visitor” who has the power to kill Whit and Wisty.

Don't use plagiarized sources. Get your custom essay on
“ The Weakness of Bravery  ”
Get custom paper
NEW! smart matching with writer

(PG.75) When Whit was explaining all the bruises and scars and places that Wisty and himself have been hurt, and how being in a hospital can’t hurt them anymore than they already have been. (PG.134-135) Explaining that there was only one way to get out if the hospital, and that’s the way they have to go so, they are able to live.

Arguing with a person is normal, but arguing with someone who can kill you right then and there, now that takes guts.

In Witch and Wizard, Whit is stirring up an argument with “The Visitor”. “So there’s something worse than being kidnapped in the middle of the night, kept in prison, sentenced to death in a laughable trial, and then locked up in a condemned hospital with two sadists? It’s going to get worse?!” (Patterson 72-73) “The Visitor” wasn’t very happy and he tased Whit with a taser gun. Picture me this, you are in your home peacefully sleeping and suddenly the military shows up in your house, takes your sibling and you out of the house, then throws you in a prison cell, your sibling somehow catches on fire, not getting hurt by the fire, even though it’s about 700°F and you can’t do anything about it, then someone comes in accusing your sibling as a witch and then the two of you are being taken to a hospital for people who are curves.

Lastly finding out that you are being sentenced to your death tomorrow. To even think about yelling at someone who calls themselves “The Visitor” and can kill you, it would still take a lot of guts. Kudos to Whit for yelling at him.

Battle scars; everyone gets them but not many people get “bruises, bumps, cuts, welts, and torn clothes” in let’s say about 2 weeks. Highly doubt that’s normal. Wisty and Whit, are in a hospital for people who are curves and people who are wanted by the N.O. (New Order) feeling the burning of their scars and wounds. After about being in the hospital for about an hour maybe two Wisty starts talking to herself and Whit is looking at her with the most confused face, and states. “Talking to yourself already?” (Patterson 75) Wisty replied with “why not? We’re in an insane asylum.”(Patterson 75) Knowing that Wisty and Whit have all of these wounds and scars, proves by itself that they are strong enough and brave enough to fight back even when they struggle, and can’t fight back they still try, and they won’t stop until they win, or receive freedom.

Shadowland, half-lights, portals, hellhounds. Whit’s girlfriend is a half-light and she is able to help Wisty and Whit get out of the hospital, but there is only one way to go. Through the portal and the portal that Celia (Whit’s girlfriend) came through had just closed and portals are hard to locate unless they are close to you, and lucky for them there was one close, but they would have to pass through the hellhounds, and there was one more problem. The door, it was locked and there was no way of getting it open that Whit and Wisty knew of. “QUICK! RAP THREE TIMES on your door. Hard!” (Patterson 134-135) Opening the door wasn’t hard. It’s just no one thought to try. After opening the door there way only way to go, and that was to the portal. Wisty and Whit were very hesitant about doing it but Celia went and they booked it. “The Visitor” and the matron took off after them. But the fact that the three of them were brave enough to do that saved them from being killed the next day in front of millions of people.

The Weakness of Bravery . (2021, Apr 20). Retrieved from https://studymoose.com/the-weakness-of-bravery-essay 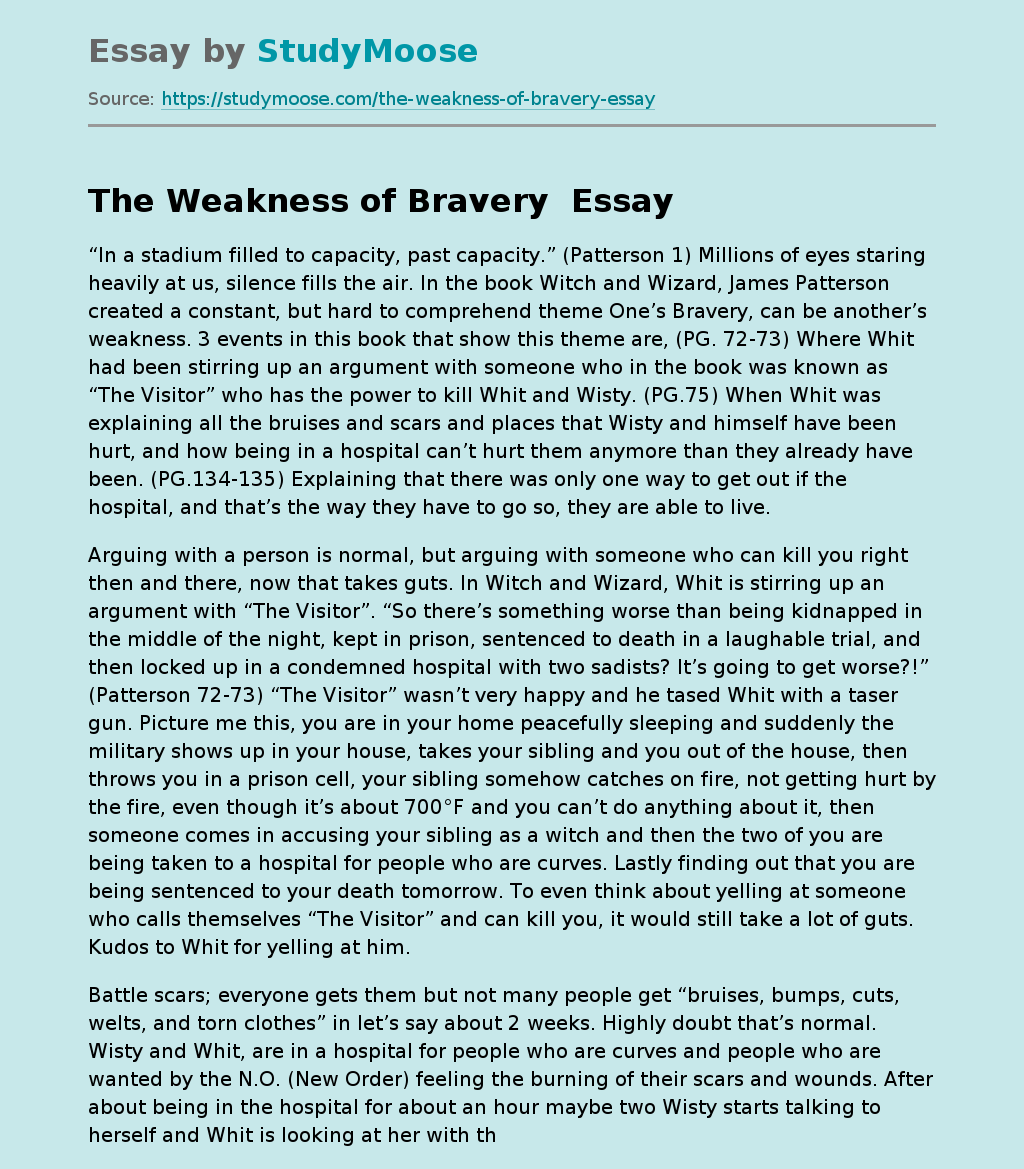