The war of the wall literary analysis

The short story “The War of the Wall,” by Toni Cade Bambara takes place someplace during the mid to late 1960’s to the mid 70’s, shortly after America’s integration and in the middle of the Vietnam War. The Vietnam War era was a very troubling time and effected almost everyone living in America at the time. The war was to prevent and resist communism in Vietnam. America was losing the battle, and they didn’t have enough volunteers for an effective military.

This is why they started drafting men to serve in the war. When someone was drafted, they had no choice but to go to war.

This was very troubling and sometimes tragic for the families and loved ones of the men who got drafted, especially when they didn’t return from war. In “The War of the Wall,” the children on Taliaferro Street are troubled by the fact that a woman had come to their neighborhood looking to paint a wall on their street that had been dedicated by the children to a man called Jimmy Lyon who had been killed in the war, and also to the legacy of the children and their families in a time of segregation.

The wall was clearly very important to them, and the narrator and his brother Lou planned to stop the woman from painting over it.

In the end they fail, and the woman succeeds in painting their wall, and the kids of Taliaferro Street are shocked by what the woman, who turns out to not be a stranger at all, has created.

“The War of the Wall” is a beautiful piece of literature that honors the history and struggles of America and also teaches not to make assumptions about people and their intentions. Bambara’s use of irony, Brooks 2 suspense, and a powerful theme make the message of her story extremely powerful and shocking to the reader, who will surely remember it long after they’re finished reading.

One literary device used by Bambara to give her story meaning is the use of a strong theme. The strongest recurring theme in this story is segregation, and the story remembers the struggles of African Americans in their battle to gain their basic human rights in a country built against them. It is stated in the beginning of the story that “Big kids have been playing handball against the wall since so-called integration when the crazies ‘cross town poured cement in our pool so we couldn’t use it. ”

This quote portrays the effect that segregation has had on the children’s lives, even after integration, by the fact that they were forced out of their own swimming pool evidently by white people who didn’t agree with the integration. The narrator also refers to integration as “so-called integration,” which is a use of sarcasm by the author, suggesting that integration has not been successful. This also shows how the children came to claim ownership of the wall as an effect of the segregation, which is doubtlessly part of its legacy and value.

The children of Taliaferro Street were outraged at the fact that she was painting on their wall, which had so much value to them because of what the wall meant to them, but the painter, instead of erasing the children’s history from the wall, decided to honor it by painting a representation of the history of Black America and all of the heroes who fought for the rights of all people and who’s lives and legacies had such a major impact on the lives of the children. Toni Cade Bambara’s use of irony in the ending of “The War of the Wall” is what makes the story memorable and gets the message across.

The falling action occurs as the narrator and Lou are on their way to spray-paint graffiti the wall so the artist woman couldn’t complete her project. At this point in the story, the reader is routing for the narrator, and most likely expects the kids to spray-paint over the wall and protect it from the woman, who the reader along with Brooks 3 the narrator assumes intends to erase Jimmy Lyon’s legacy and the children of Taliaferro streets’ legacy and replace it with her own.

The reader begins to make an antagonist out of the woman because she is the antagonist in the eyes of the narrator. For example, while the narrator’s mother is saying why the painter lady isn’t so bad, the narrator contradicts her with this thought: “Who did that lady think she was, coming into our neighborhood and taking over our wall? ” His argument is that the wall belongs to the children of Taliaferro Street in honor of Jimmy Lyon, and the woman has no right to come into their neighborhood from far away, claim their wall as her own, and erase its meaning to replace it with her own.

The reader is feeing as indignant as the narrator in the point of the story where the kids are on their way to paint over the wall and reclaim it. Imagine the anticipation, and finally the shock as the story comes to a conclusion in the last way the reader expects. The irony is that the woman that the reader has come to loathe is Jimmy Lyon’s cousin, and has come to paint the wall in his memory and in memory of the history of the fight to end segregation in America.

It is evident that segregation has been a big part of the children of Taliaferro Street’s lives from the time period of the story, which takes place shortly after integration. So, when the artist lady paints a memorial of all the people who the children have heard about in stories and learned about in school who helped to defeat racism and get America as far as it had come when the story took place, rather than debasing the legacy of the wall, she built it up so everyone could see it and the value it holds.

The woman didn’t debase the wall, like the reader expected, but rather enhanced it with a beautiful depiction of American history and America’s heroes. She wasn’t undermining the children, she was honoring them and the wall. Another literary device used by Bambara that enhances the story in many ways is suspense.

Throughout the whole story, the reader is wondering what the lady is painting, and the Brooks 4 anticipation builds so right before the reader discovers what she’s done with the wall, they’re on the edge of their seats, which augments the effect of the ironic ending. One way the author builds suspense is by her description of the artist’s body language. Bambara describes how the artist lady is completely immersed in her work, and doesn’t even look up when the children approach her. It is evident that she is working very hard on her painting and that she’s doing it with a purpose.

Although the narrator doesn’t seem to be concerned with what she is painting, the reader can’t help but be curious. The author also describes at one point in the story what the wall looks like while the lady is preparing to paint it. The narrator says. “When we came home from school, the wall was slick with white. The painter lady was running string across the wall and taping it here and there… she had strings up and down and back and forth. Then she began chalking them with a hunk of blue chalk. ” Naturally, the reader’s curiosity is aroused.

It is hard to imagine what the painter lady might be preparing with white paint and blue chalk and string, but the reader can infer that it is something complex and interesting. The interest of the reader is captured, and suspense builds as the anticipation of what is being painted grows. Finally, anticipation is building when the narrator and Lou are on their way to the wall to graffiti it and wreck the artist’s work and prevent her from continuing. The author paints a scene where half the neighborhood is crowded around the wall, admiring the artist’s completed work.

Snippets of dialogue from onlookers give the reader bits and pieces of what the people think of the masterpiece. At this point, the suspense has the reader dying to know what has been painted. When it is revealed in a bright and colorful description, the irony of the finished product hits the reader even more powerfully since they were already desperate to know what it was. The buildup of suspense enhances the irony and makes the surprise ending even more meaningful, and as a result it has a bigger impact on the reader.

Brooks 5 In conclusion, Toni Cade Bambara’s “The War of the Wall” was a beautiful piece of literature that highlights the importance of America’s heroes and honors the struggles of African Americans to gain freedom in a country pitted against them. The author uses literary devices such as irony, suspense, and a strong theme to keep readers on the edge of their seats and to make the ending as shocking and compelling to the reader as possible.

Readers will remember this story for weeks after they’ve read it and come away with a new sense of appreciation for the heroes that shaped America, a recognition of how far America has come as a whole, and a hope for a brighter future where racism doesn’t exist.

The war of the wall literary analysis. (2016, Sep 12). Retrieved from http://studymoose.com/the-war-of-the-wall-literary-analysis-essay 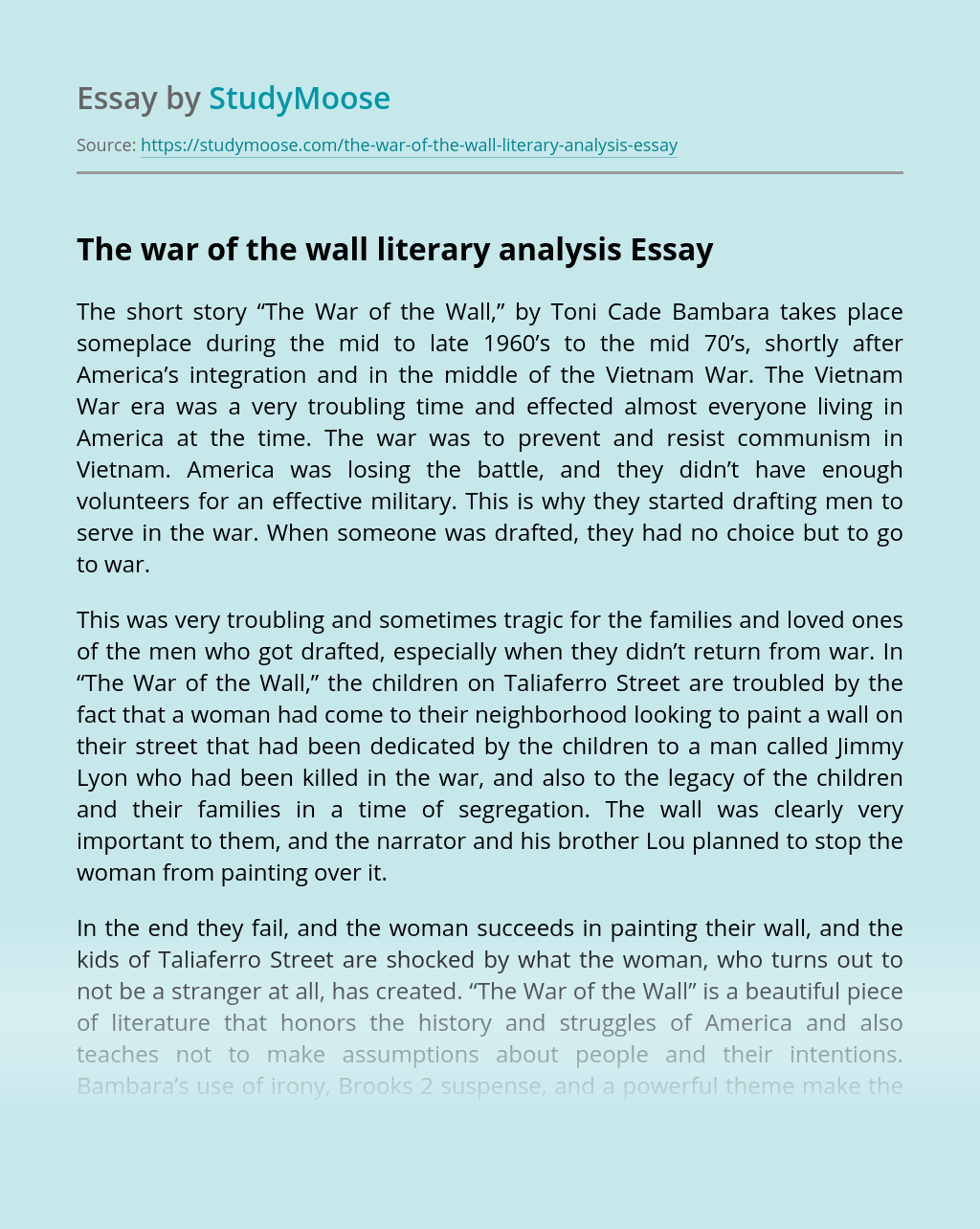 Don’t waste time
Get a verified expert to help you with The war of the wall literary analysis
Hire verified expert
$35.80 for a 2-page paper
Stay Safe, Stay Original