A sheriff’s deputy by the name of Rick Grimes carefully strolls out of his car among vacant cars and trucks scattered all over on the roadway. Slowly pacing himself, he continues to stroll through the calamity of bashed windows, decomposing bodies, and stained things. There was no one. Not a noise in the wind and not a soul in sight. He suddenly hears scuffling of feet originating from someplace. Stopping briefly in his tracks, he gently sets his hat down and leans under a car to get a much better look.

Turn in your highest-quality paper
Get a qualified writer to help you with
“ The Walking Dead ”
Get high-quality paper
NEW! AI matching with writer

There, a set of filthy feet shuffles away. He jumps up and attempts to stop the young lady as she drags a soiled teddy bear through the rough roadway.

He calls her to stop again. The young girl stops. Turning her body slowly, the deputy catches a glance at her face. Pale white skin tarnished with blood drizzling down her absent jaw and blood shot eyes that pierce through his soul.

She starts to walk towards him, faster and faster, to the point where she’s charging at him. The deputy fumbles to pull his gun out and BAM! The Walking Dead TV series begins with a bang in 2010. After successfully airing two seasons, The Walking Dead has won an Emmy for Outstanding Prosthetic Make-up, a Golden Globe Award nomination for Best Television Series, and numerous other awards.

The show is based off a comic book series taking place in the aftermath of a zombie apocalypse where Rick and other survivors try to find safe haven from the hordes of “walkers” who savagely devour whatever they seize and infect people with their bite.

The plot is focused primarily on the dilemmas the group faces as they struggle to balance their humanity with their survival against the zombies, how they cope with members being killed and deal with other human survivors they encounter in the attempt to rebuild a fallen society. 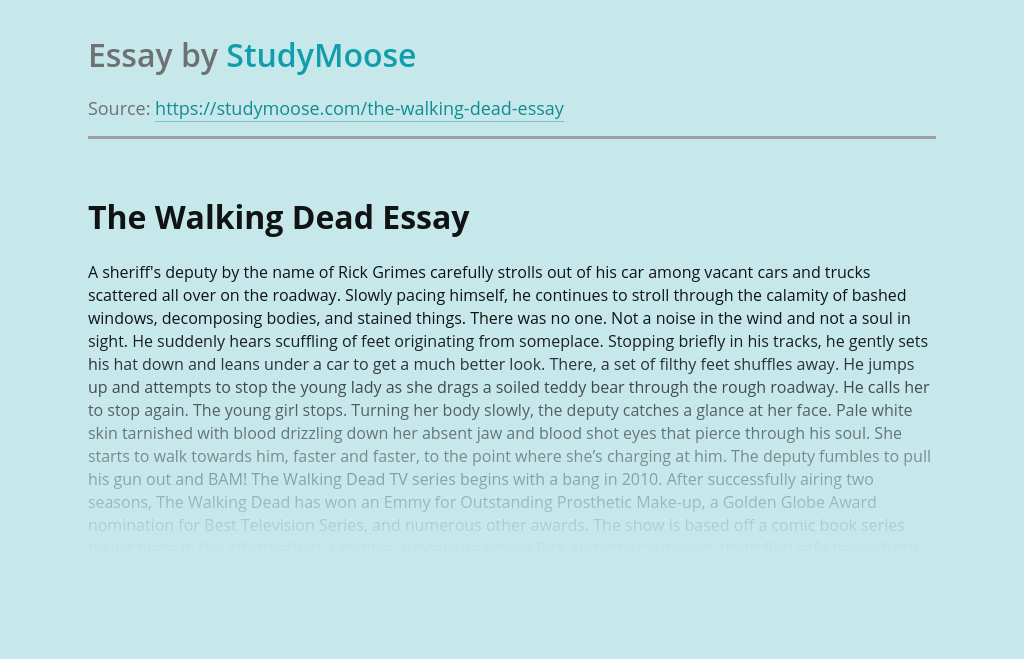 Turn in your highest-quality paper
Get a qualified writer to help you with
“ The Walking Dead ”
Get high-quality paper
Helping students since 2015
Stay Safe, Stay Original