The Voice of Woman in "The Storm" by Kate Chopin

Looking back in time to when Kate Chopin first began publishing her short stories they inevitably already showed how bold of a writer and a person she was. Chopin defied the social norms of what a woman was supposed to be like especially in a time where woman had to follow a certain role. The short story, The Storm, takes place in the southern part of the United States in the late nineteenth and early twentieth century. Chopin wrote with honesty about sex and adultery which is a very taboo subject even in today’s world.

Don't use plagiarized sources. Get your custom essay on
“ The Voice of Woman in “The Storm” by Kate Chopin ”
Get custom paper
NEW! smart matching with writer

The beauty of Chopin’s story is that we are able to get insight of how women were seen during this time and the controversy surrounding this story as well as what lead Chopin to write such a story.

Kate Chopin was born in St. Louis on February 8, 1850 to Eliza and Thomas O’Flaherty. At the age of five Chopin was sent off to boarding school by her parents to be taught by the Sacred Heart nuns.

Already at such a young age Chopin was being molded into the woman she was depicted to be. Chopin was one of five siblings, but by the age of twenty four she became an only child. After the unexpected death of her father the same year she was sent off to the Sacred Heart boarding school she came home and was then tutored by her great grandmother. At such a young age she already deified what a girl should be doing, she had an insatiable hunger for knowing everything.

She had her own agenda, and she wanted to know everything (Toth). Kate married Oscar Chopin in 1870 and had a loving relationship, unfortunately Oscar would die twelve years later of malaria in 1882 leaving Kate as a single mother of six. As a child Chopin had a commonplace book where she kept all her writings but it was not until 1889 at the age of 37 when she began writing fiction.

During which the time Chopin wrote “The Storm” it is understandable as to why she chose not to go public. Women were expected to stay home and encouraged learn embroidery and use their skills in a home setting. Women lived in a quiet world of domesticity and care, it was a mans world (Toth). From a young age Chopin showed she was very different and wanted change, she felt no shame especially in sexual desire. But her own intelligence and ambition had done the most to drive her away from the expected path—belle, wife, widow, club woman—and into a unique channel, as a writer of stories about women’s dreams and conflicts and possibilities (Toth). Changes were coming for women, they were making many advances during this time. Many were coming forward and sharing their talents, from sculptors to writers and musicians. Women were becoming much more than just homemakers.

In “The Storm” we have two married couples Calixta and Bobinot, and Alce and his wife. Calixta and Alce find themselves alone at the home of Calixta during a horrible storm and have an affair. Chopin herself had an overall good relationship with her husband, Oscar, aside from the fact that she herself had flamboyant fashions, and tendency to flirt with other women’s husbands, Kate Chopin was a Cloutierville scandal (Chopin). Soon after his death she was left with his debt, And she was immediately offered help and comfort by Albert Sampite (pronounced ‘SAM¬pi¬tay’), a handsome Cloutierville planter—married—who liked to console widows and was famous for pursuing other women (Chopin). Although never confirmed the wife of Albert Sampite had remarked that Chopin had broken up their marriage. Sampite also partially inspired the character “Alce” in “The Storm”. Her realistic style brought to life memorable characters and themes in her early work, but turn-of-the-century America was not yet ready for her most serious and influential work (Oakes).

We can see that Chopin did incorporate bits and pieces of her life and the people in her life into her stories. “The Storm” takes place in Louisiana, the same state in which she lives in and one of the main characters, Alce. We know Alce’s character was partially influenced by Albert Sampite, a married man Chopin may or may not have been having an affair with. Then we assume from there that Calixta may have been Chopin herself and Bobinot her husband Oscar. Chopin did have a history of being flamboyant and flirting with married men, although the full story is not what Chopin lived through exactly. Chopin would take people in her life an change the names around and put them into her stories, even though her stories were mere fiction they still spoke a tremendous amount of truth. Her stories gave a sense of freedom, she gave women liberation and freedom from the social norms of that era. There might have been many women who felt trapped in their marriages and Chopin gathered experiences from her life and put them in to her stories. Chopin’s mother, Eliza, was also another inspiration for her stories. As a teenager, Eliza desperately needed money and marriage was the only respectable way for a young woman to acquire it (Toth). Chopin’s father, Thomas O’Flaherty, at the time had lost his then wife to childbirth and needed a wife. arrangements were made and although Eliza being sixteen and Thomas 39 they married in St. Francis Xavier Catholic Church.

Chopin was most often misunderstood as a person and many disagreed with her writing. Her stories were seen as vulgar and immoral and to their understanding with no background when in reality it was Chopin voicing the many problems woman faced during that time period. She pushed the boundaries and wrote about what many women went through and were looked down on only because they were not men. Chopin revealed what many women faced on a day to day basis, they were forced into marriages they did not want to be in but had to. Chopin was not afraid to voice her opinion and voiced the naturality of sexual tendencies woman had.

The Voice of Woman in "The Storm" by Kate Chopin. (2021, Aug 03). Retrieved from https://studymoose.com/the-voice-of-woman-in-the-storm-by-kate-chopin-essay 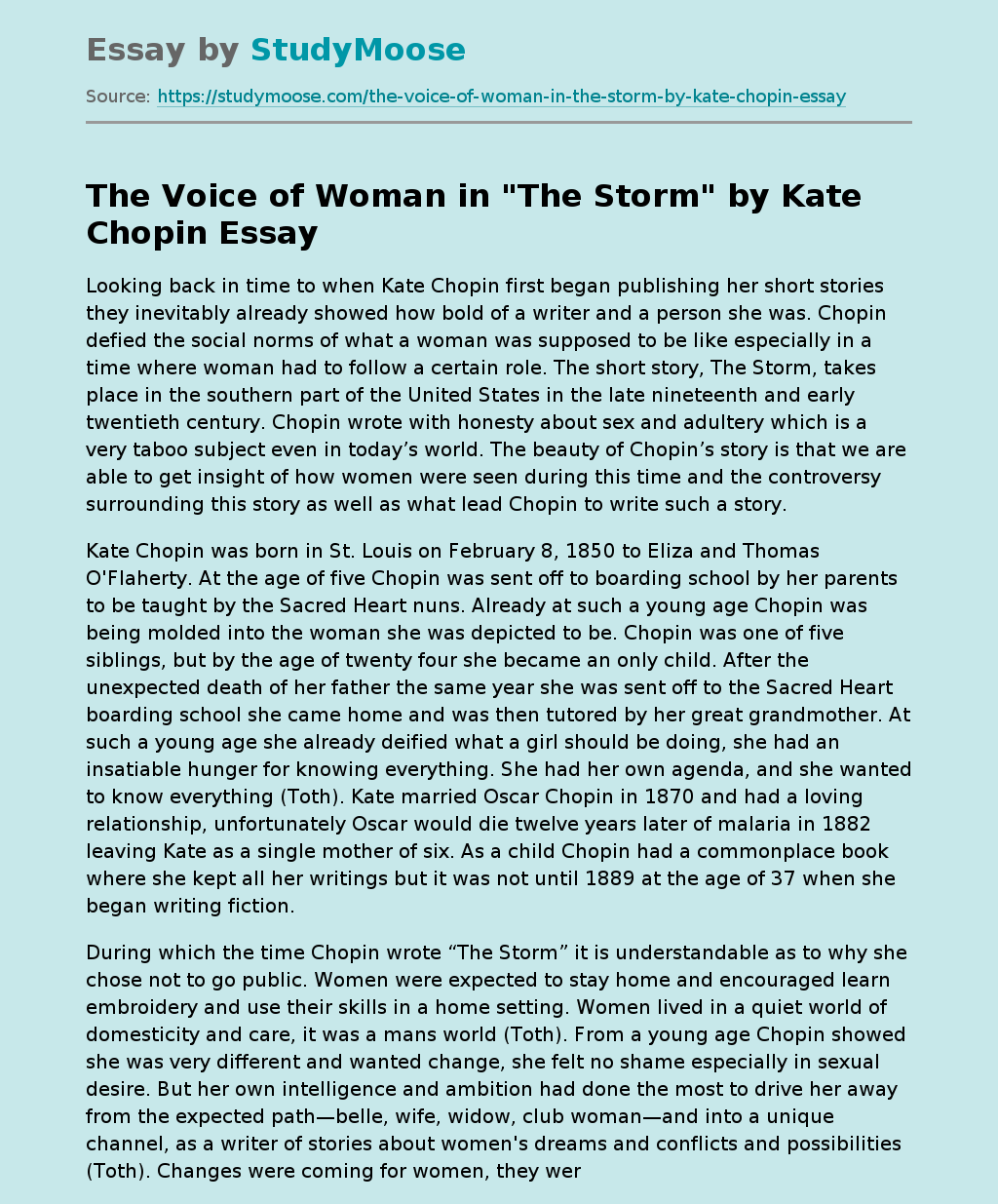