The Victorious Youth in Grecian Art

The Victorious Youth is a Grecian bronze sculpture dated to be between 300-100 B.C. whereas the Riace Warrior was older and was probably made between 460-450 B.C. The Greeks had their art of portraiture, in which a victorious youth would lend his features to images of the gods, while the portrait of the general, the philosopher, or the poet was fashioned like a statue of the divine, and was given superhuman touches.  The divine remained a generalization and intensification of the human.

The Greeks did not endeavor to reproduce particular details, but to present a picture in which had been elaborated the idea they embodied.  Hence the victorious Youth has more god-like features whereas the Riace warrior has been given superhuman characteristics.  Also, the Victorious youth is wearing a wreath on his head which is a symbol of victory and kingship in Grecian art. In the case of the Riace warrior, its  attitude of defiance represents the moral force of the people it symbolizes.

The Victorious Youth appears to be more relaxed and the olive wreath on his head identifies him as a victorious athlete. The muscles on the Riace Warrior are very naturalistically sculpted. Both the sculptures depict the concept of weight shift as they both rest on one leg each.  The Riace warrior, however, seems more tense and his muscles taut, as if waiting for something in anticipation. The hair and the beard seem more intrinsically sculpted compared to those of the Victorious Youth.

The facial expressions of both the sculptures identify and collate with the whole idea of the Victorious Youth being a successor and the Riace warrior having to do with war.

Also contra- posto is in effect as both the figures experience a certain degree of gyration. It is essentially a new technique in art as rigid frontal sculptures gave way to more natural poses. However, in the Victorious Youth, the hands seem to be out of proportion compared to the rest of the body. It seems as if the sculptor meant to exaggerate the hands so that the action of the youth touching his wreath is more prominent hence the whole idea of him being the winning athlete.

Gardner’s Art through the Ages: A Concise Western History

The Victorious Youth in Grecian Art. (2017, Mar 18). Retrieved from http://studymoose.com/the-victorious-youth-in-grecian-art-essay 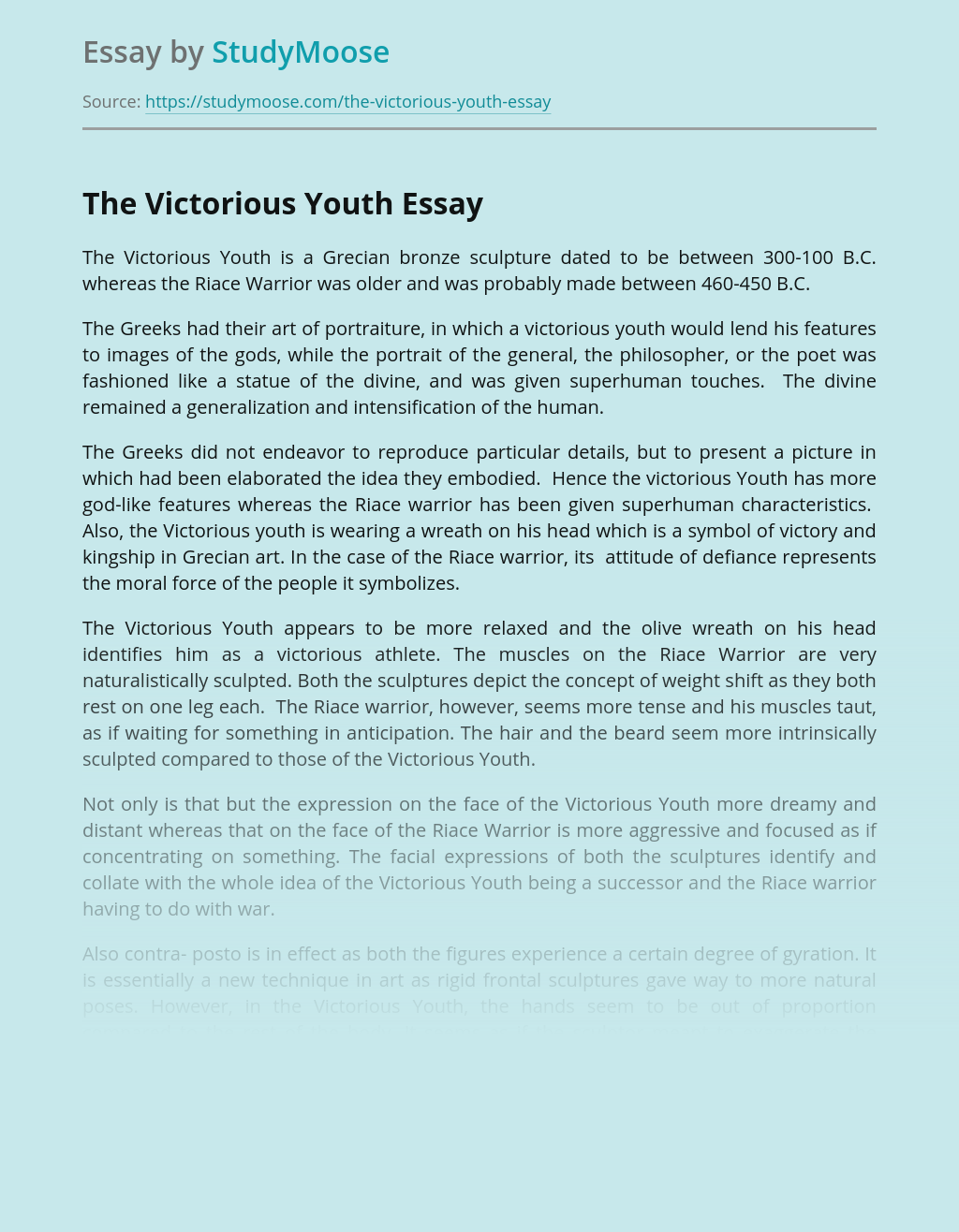 Don’t waste time
Get a verified writer to help you with The Victorious Youth in Grecian Art
Hire verified writer
$35.80 for a 2-page paper
Stay Safe, Stay Original