Was this truly a disaster? What lessons can be learned from this case and similar disasters, particularly regarding the importance of such “human factors” as courage, truthfulness, and open communication?

The Vasa was built as a symbol of Sweden’s naval supremacy. Unequalled in size, ornamentation and firepower, the Vasa was intended to project might and to intimidate the nation’s enemies. Of course, the reality of Sweden’s many conquests in the Baltic region was not lost on its enemies.

Don't use plagiarized sources. Get your custom essay on
“ The Vasa Case Study ”
Get custom paper
NEW! smart matching with writer

Further, the Vasa was a source of immense national pride. The first of its kind in any navy and by any country, it seemed a triumph of engineering and the nation’s technological prowess. Beyond the projection of unmatched force and national pride, however, the Vasa had more practical value.

As the navy’s flagship vessel, it would be employed in the interest of national defense, to transport military personnel and supplies as it waged war, and to apply force in collecting revenues.

Moreover, the speed of its construction was occasioned by the loss of ships during combat. This led to demands by the king to have the Vasa and other ships completed far ahead of schedule. The fine prototype seen by a gushing public on the day of its inaugural voyage masked serious design and engineering flaws. It sailed a mere 1400 yards before it capsized and sunk to the bottom of the sea, in full view of a crowd of spectators. The toll on the national treasure was in excess of 5% of the nation’s Gross National Product (GNP), and even more importantly, it cost the lives of at least fifty persons.

This was truly a disaster of monumental proportions.

The failure and tragic end of the Vasa project is instructive with respect to certain human factors as described below:

It is absolutely critical that all members involved in the planning, designing and implementation of a project be fearless in acknowledging all actual problems and risks. Team members must have the courage to communicate all problems to the project manager who must, in turn, communicate with the stakeholders. The fear of failure, consequences of various forms (and in the Vasa project, the threat of punishment from the king) may inhibit the tendency to “speak out”, modify a project, or abandon it altogether, however, it must be done, especially when the consequences are significant with respect to wasted resources, and as the case study shows, when lives are at stake. Shipmaster Hybertson acknowledged his inability to conform to the King’s specifications, but ultimately acquiesced when, under pressure, he decided “to do whatever is necessary to satisfy the king’s demands.” At the outset of a project, it is necessary to create an environment where fear and intimidation are removed.

The need for truthfulness cannot be over-emphasized. In order to succeed in a project, team members and the project manager must be truthful in all actions and communications. Information at all stages of the project’s progress must always be accurate even if it less than desirable, and especially when there are significant risks to the public (Heldman, 2013). Truthfulness also relates to how problems are minimized as in the case of the Vasa project when Admiral Flemming discounted the obvious design and engineering flaws during the testing stage with his response that “the shipbuilder has built ships before.”

Effective communication is the lifeblood of a project. There has to be clear channels of communication between the team members, the project manager, and the stakeholders. The absence of information-sharing by the master shipbuilder, occasional breakdowns in information flow among the project manager, Admiral Flemming, and the shipbuilder and the king, were critical factors resulting in the failure of the project. The lesson to be learnt here is how absolutely essential a communications plan is to the success of a project (Larson and Gray, 2011). 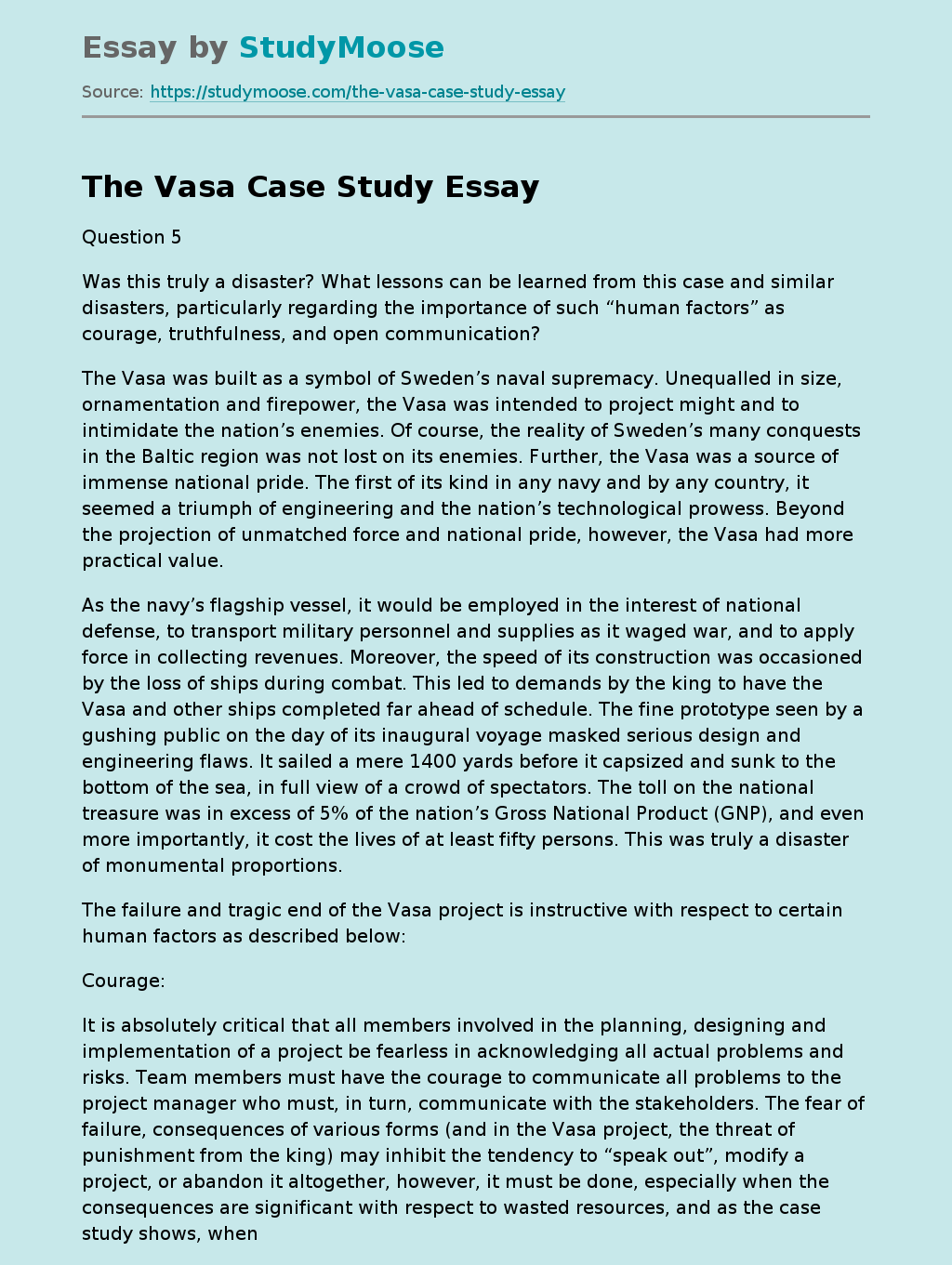