The Value of Social Media for Young People

Social media is a very monumental thing for younger people, and it’s a rapidly evolving platform for teens to share content of all types and communicate with each other and express themselves for the wrong purposes. Some people believe that the internet and its various social networking affect the youth in many negative ways.A good example that affects a teen is health, like depression, anxiety, sleep deprivation, stress, all of these are many ways a teen can be negatively impacted by social media .

Don't use plagiarized sources. Get your custom essay on
“ The Value of Social Media for Young People ”
Get custom paper
NEW! smart matching with writer

For instance, one of the most common symptom is depression in teenagers, which can be caused by social media. In an article it says researchers have discovered that social media can be related with an intensification of symptoms of depression, including a decrease in social activity and also an increase in solitary. Experts see the rise in depression as evidence that the associated social media users are less emotionally satisfied, leaving them feeling socially solitary . Sleep deprivation is another common effect, in the article ‘Does Social Media Cause Depression?’ it started with a quote “Social media can have a profound effect on sleep,” sleep deprivation is a sleep condition of not having enough sleep .

This is a very serious thing and kids dont let go of their devices all because their stay up talking to their friends till 2 am all this can later lead to something more serious not just sleeping problems. Social media can be something really negative when it comes to your health.

The internet can also be negative to the youth when it’s used for the wrong purposes, and mostly because the youth express themselves and communicate with each other in the wrong ways.

Most of the time teens just do it for fun or because there not mature enough to understand the negativity it brings to other kids, especially when there’s profanity used in certain situations or posts that they post online to make fun of others. Teens who are not mature enough in situations like to put people down and like to put their self-esteem down and that’s really messed up because nobody should ever have to feel that way ,they like to bully kids everywhere and they like to make fun of them every day, this is another way why social media can be a very negative thin in a teens life.

Cyberbullying is a very serious thing and a horrible thing to do, no matter whether its the traditional bullying or cyberbullying, it causes emotional and psychological distress. Teens who are bullied can experience negative issues in physical, school, and mental health. Teens who are bullied are at risk of suicide, many issues contribute to really bad risks, including depression,death, problems at home, and trauma history. This risk can be increased further when these kids are not supported by parents it can make an unsupportive situation worse. Teens might feel puzzled by changes in their friendships groups. They might also feel alone, lonely and isolated from everyone and anything. Bullying can happen to anybody and this is another way social media is a very negative thing nowadays because people don’t use it for good things they use it for erroneous purposes.

The Value of Social Media for Young People. (2021, Dec 09). Retrieved from https://studymoose.com/the-value-of-social-media-for-young-people-essay 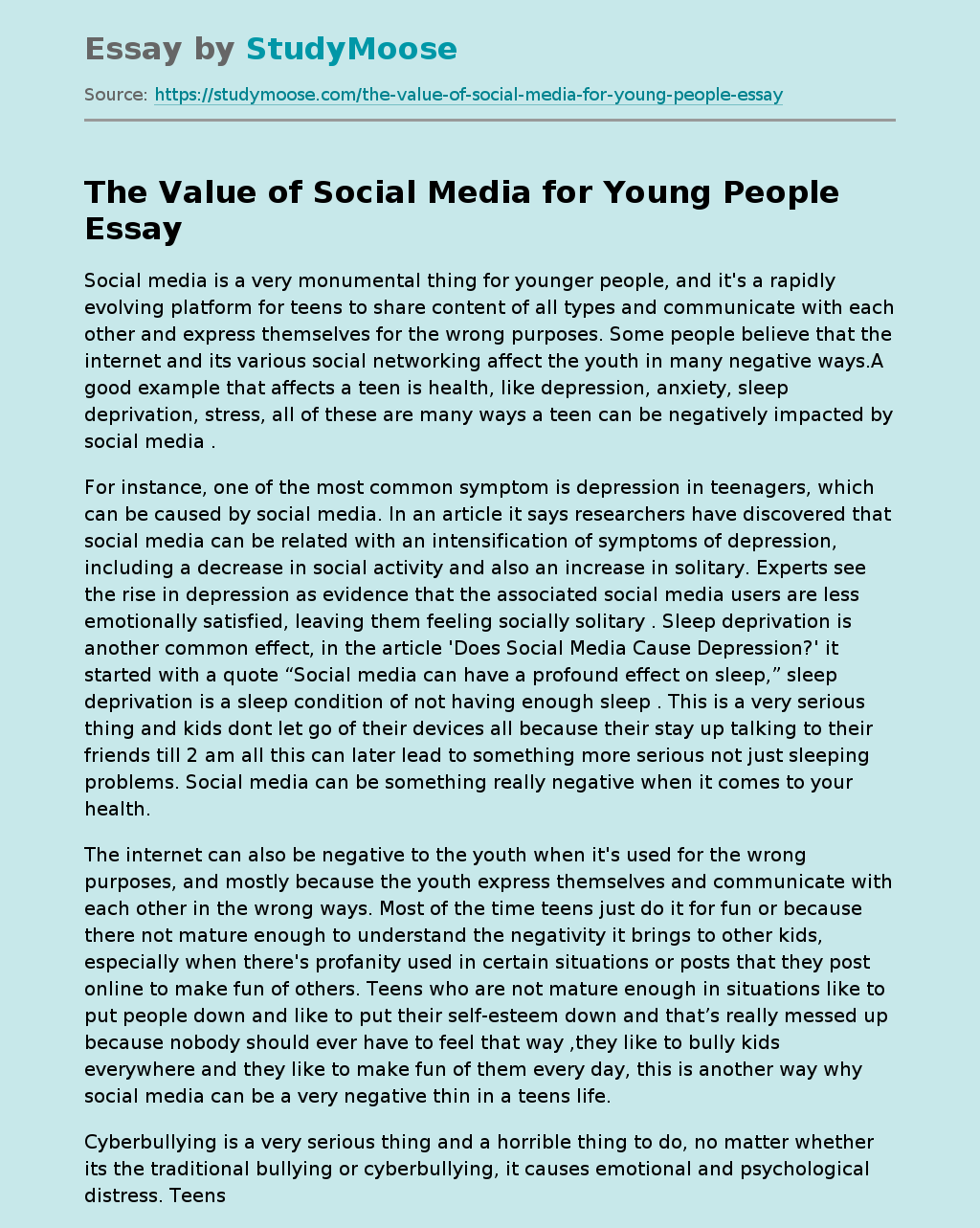