The social security system in the United States is a federal program that benefits the retirees and the disabled that was introduced in 1935. This program contains the disability income, public housing, retirement benefits, food stamps program and also the veterans’ pension. These benefits are not like any other government welfare programs. This is because the social security welfare system follows very intensive eligibility guidelines which are mostly based on the employment history of the individuals and also their contributions they have so far made to the social security system (www.

Don't use plagiarized sources. Get your custom essay on
“ The United States Social Security Administration ”
Get custom paper
NEW! smart matching with writer

In America, the country uses a government-managed type of social security system famously known as the Pay-As-You-Go system. Under this system, every worker is obliged to pay a social security tax and it is the number of years that person has been employed and the amount contributed that will eventually determine the amount of benefits that a person is entitled to (www. injuryboard. com/view. cfm/topic=1237). Therefore, amount of contributions made by a worker with the number of years under employment has a direct and proportionate relationship with the benefits that one is entitled to.

The higher the amount contributed coupled with long years of work, the higher the benefits that an individual receives. In addition, the social security program in the U. S. is made up of contributions that are mandatory and are mostly collected from employees, self-employed and employers. These contributions are then distributed to workers who have retired including their survivors and dependants.

The government has set $1,750 as the maximum benefits as per month for every worker who retires at age of 65 and 2 months which is the social security’s appropriate retirement age (www.

injuryboard. com/view. cfm/topic=1237). The current social security system should be replaced by a mandatory private pension system. I support the idea to change the current government- managed system to avoid taxing the current workers and enhancing its ability to tax the generations to come. I also do not support the current social security system in United States as it has led to the establishment of class conflicts and moreover the benefits that the U. S. workers get are low as compared to their Chilean counterparts.

I propose that we move to an entirely new system of social security for instance the one practiced by the Chilean government. The Chilean government practices the privately individual owned retirement system. If the American government adopts this new system of which is a mandatory private pension system, it means that every month, workers will be able to deposit some amount to their individual pension saving accounts that will be managed and handled by pension fund administration of their choice as these companies will also be specialized in nature.

As a result, the individuals’ savings will be able to be invested in a port folio of stocks and bonds which will be subject to government regulations based on specific types. When these employees/ workers reach their retirement age, they will be able to use their accumulated funds in investment opportunities such as buying annuities from insurance companies. Moreover, workers will be able to program their withdrawals available in their accounts. The amounts in the accounts depend on the number of years they have worked (Augusto & Palacious, 2000).

In other words the new system if adopted will enable workers to retire with better benefits and secure pensions. The new system if adopted will also contribute significantly to the whole economy and the workers in the Unite States. Development of capital markets will be enhanced, it will lower the volatility of securing price and hence leading to increased volumes of trade. Since workers decide on the way their money is to be used, it leads to increased investment hence fostering productivity and growth of the nation. The returns under this system are also higher than those of the government –run social security system (www.org/testimony/ct-sr073101. htm). In conclusion, I strongly support the private mandatory social security system. References Augusto, I, K& Palacious, R. , “Managing Public Pension Reserves: Part 1 Evidence from the International Experience” World Bank, January 2000 pg4 The Current State of Chile’s Private Pension System. Accessed on 18th July 2007 from www. org/testimony/ct-sr073101. htm. United States Social Security System Lawsuit Information. Accessed on 17 July 2007 from www. injuryboard. com/view. cfm/topic=1237. 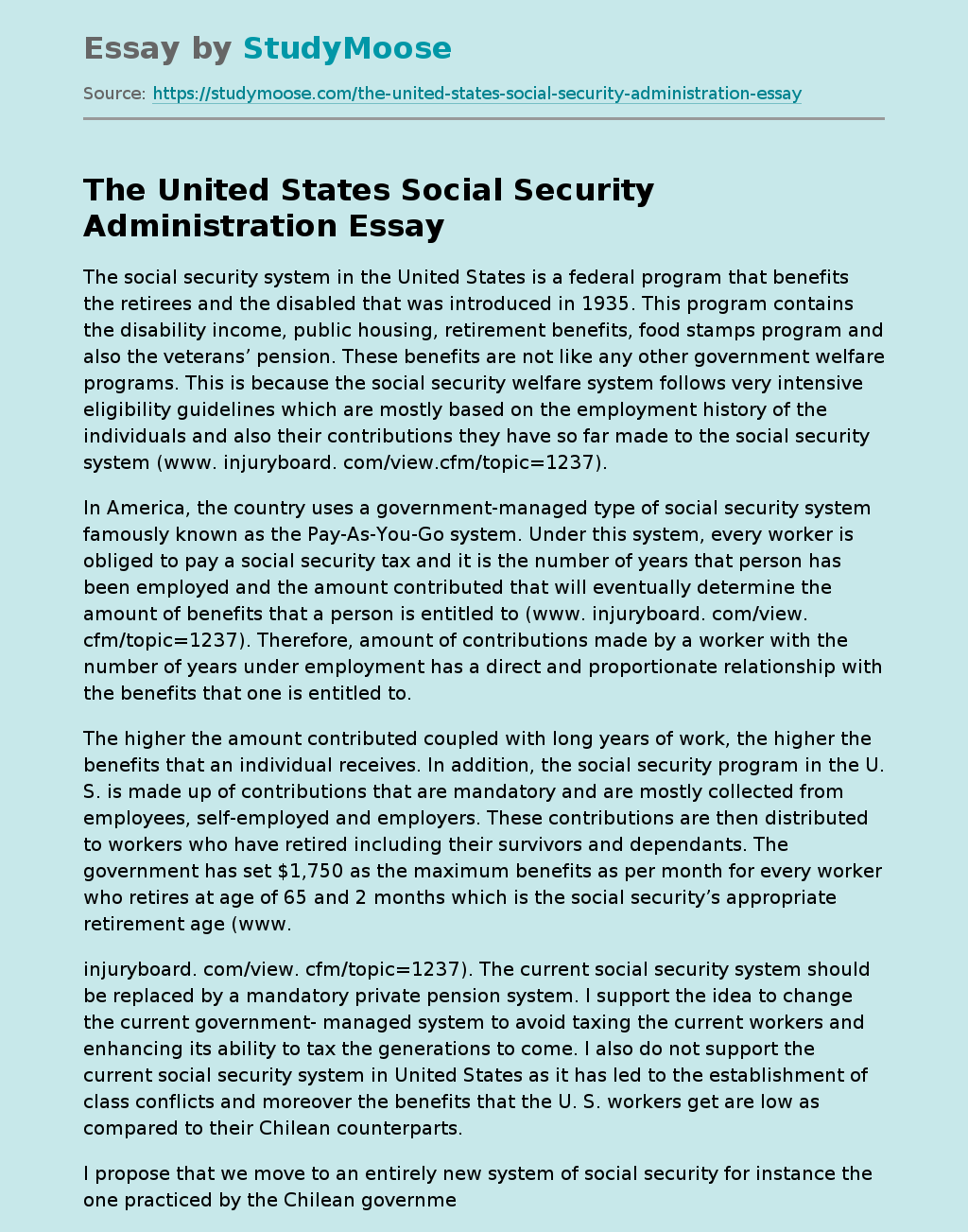