"The truly great" by Stephen Spender

This poem, broadly, is an attempt to describe what makes a person “truly” great. The poem was written in the 1930’s during wartime, this no doubt influenced the poet. However, soldiers are not the only people he is referring to. He is essentially referring to anyone who selflessly fights for what they believe in.

“I think continually of those who were truly great

Who, from the womb, remembered the soul’s history

Through corridors of light where the hours are suns,

Here the poet makes an important defining point in the word “truly”, it sets the theme for the rest of the poem which expands upon this idea of truth showing what it is and how it effects the air it touches. Another important word here is “continually”, in my mind something cannot be thought of continually without some form of prompting: this prompting is his musing or concern over the men in the war.

In the next few lines he defines artistically a characteristic he believes to be endowed in men of true greatness, that of passion.

He says that even before birth these men are filled with passion and love (“soul’s history”), where they enjoy every moment in and “endless” indulgence in passion and enjoyment (“singing”). In comparing them to a child in the “womb”, he endows these men or woman with a child’s willingness to participate or enjoy things: old and new.

Was that their lips, still touched with fire,

Should tell of the spirit clothed from head to foot in song.

And who hoarded from the spring branches

The poet continues to talk about the idea of passion in this passage. He refers to the “endless singing”, emphasizing the idea of childlike exuberance from the womb with the word “still”. He says that their actions (“lips” with reference to “singing”) still filled with passion (“fire”) tell of the spirit or their strong beliefs in every thing that they do (“clothed from head to foot”). The repetition of this idea of a song of the spirit gives us the idea that their beliefs are unwavering, steady and strong. The next two lines discuss dreams and the ability to dream unrestrained again almost like a child. This idea of unrestraint is emphasized by the word “hoarded”.

In the words “spring branches” we get the idea of newly growing dreams or “desires” as he puts it. The desires are compared to newly grown blossoms being taken from a spring branch. This idea of newness, spring and dreams again seems to illustrate ideas pointing to the character of a child. The use of the word “bodies” could shed a different interpretation of this, the flowers are dreams and desires as was established but could they be the same flowers thrown over a coffin as it lies waiting for dirt in a grave?

What is precious is never to forget

The delight of the blood drawn from ancient springs

Breaking through rocks in worlds before our earth;

Never to deny its pleasure in the simple morning light,

Nor its grave evening demand for love;

Never to allow gradually the traffic to smother

With noise and fog the flowering of the spirit.

In the first paragraph Spender focused on passion, here he focuses on human ideals. He says that even before we lived (“before our earth”) men have needed and delight in the things and sustenance (“blood”) that make us who we are. In this with the reference to “our earth” I feel not only is he making a point about another time, but with emphasis on the word “our” we see that he is also referring to other people. Here he cleverly blends these ideas, suddenly he has illustrated that not only do we require what makes us human but that we all are men and require similar things: this is potent phrase on human rights with reference to race and gender.

He continues to expand on this idea. He says we should never “deny its pleasure” or these liberties, for the may be “simple” but are necessary like “light” but also refreshing to us as the “morning”. He says “nor its” if it wasn’t already obvious he is referring to the “soul” or psychological needs of man as introduced in passage one. On this line he is simply saying that all men (humans) have the simple right and need (“demand”) for love and it should not be denied.

In the last two lines of this passage Spender talks about the fight to retain our youthful ability to dream and “flower”. The “traffic” could be interpreted as two things, either oppressive powers such as totalitarian governments or quite simply and dreary drag or bore of life that destroys our loves of life as we get older. Another point made here is “flowering of the spirit” the poet says that the spirit is always able to be flowering, thus he suggests that we as people should always be growing and improving what we are.

Near the snow, near the sun, in the highest fields

See how these names are fêted by the waving grass,

And by the streamers of white cloud,

And whispers of wind in the listening sky;

The names of those who in their lives fought for life,

Who wore at their hearts the fire’s center.

Born of the sun, they traveled a short while towards the sun,

And left the vivid air signed with their honor.

This section bears evidence of a heavy war influence. The poet talks now about the final thing that separates men from great and the “truly” great, that is selfless exposure for the things they believe in. The first few lines are simply a metaphor describing that the men are above others. I feel the word “waving” perhaps is supposed to evoke images of a waving flag, on a “high field”. The “streamers” of white cloud has to do with a victory celebration either by man or maybe the spirit of nature or even god rejoices at men dieing for their beliefs, could the poet be inferring that this is the purpose of our very lives? They wore the very essence of passion and bravery the “fires center” as they lived and died. Born of the sun, (I feel the sun has something to do with the source of inspiration) they lived out their short lives (traveled a short while) in search of their dreams. And when they die they leave history or the human spirit (has some reference to first paragraph) signed with their honor, this either means their names on gravestones or memorial plaques but more likely their names are actually a personification of their achievements.

The poem is a brilliant treatise or formula on life and how we should live it. It is an ethical poem on the rights of man and the freedom owed to all. It tells us how as men we can live, and as we die can be immortalized in our actions. He says that truly great men can be simple so long as they are filled with the passion of action and belief. The nature hue of resolution cannot be sickled over with thought, and must always hold the name of action throughout the entirety of our lives. Great men are full of believing, but the truly great spare no moment to die in lieu of that believing.

"The truly great" by Stephen Spender. (2016, Jun 30). Retrieved from https://studymoose.com/the-truly-great-by-stephen-spender-essay 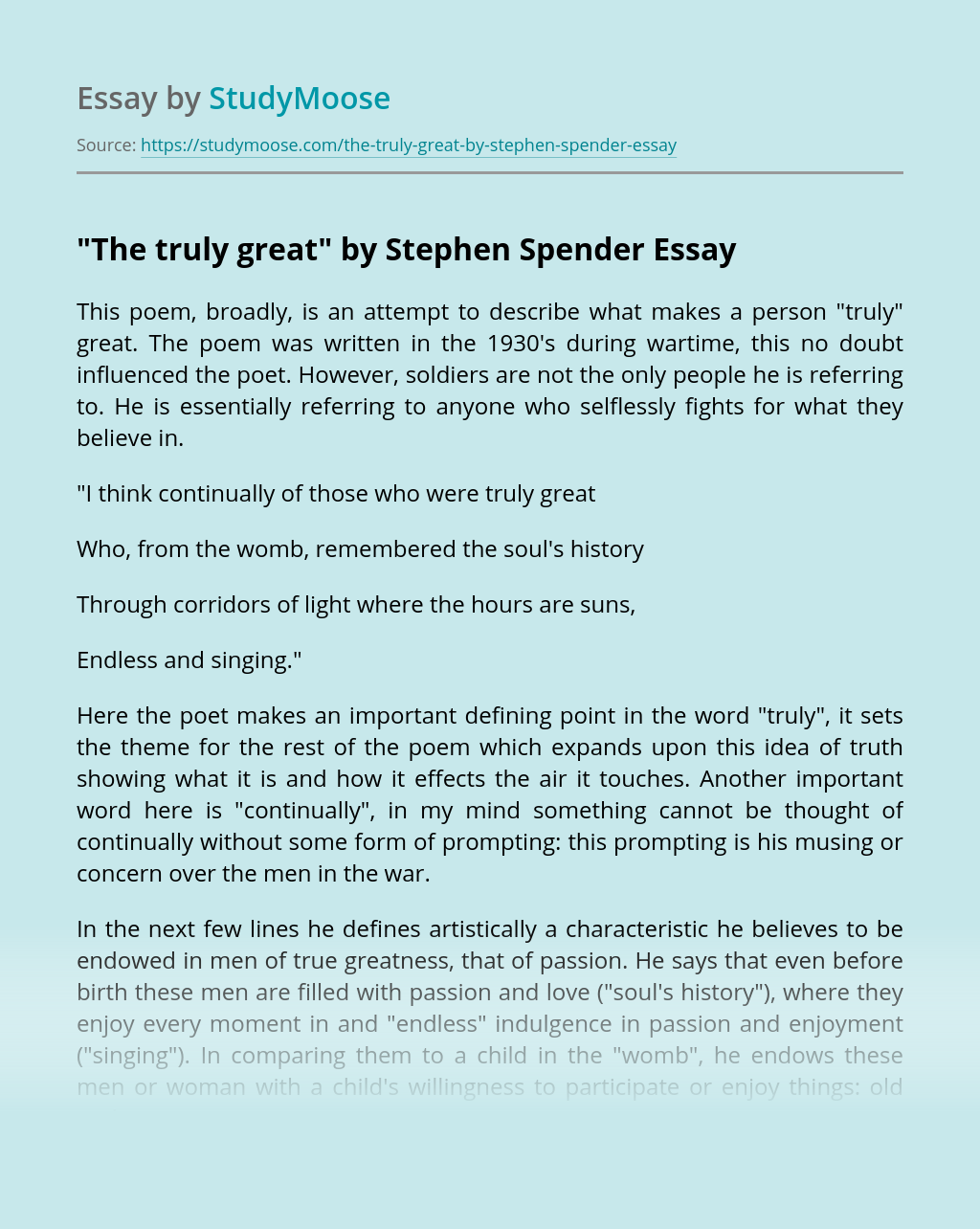 Turn in your highest-quality paper
Get a qualified writer to help you with
“ “The truly great” by Stephen Spender ”
Get high-quality paper
Helping students since 2015
Stay Safe, Stay Original