The truest evil in I’m Not Scared is poverty

The novel “I’m Not Scared” illustrates the harsh, brutal and dangerous lives of people living in Acqua Traverse. Author Niccolo Ammaniti reveals how people in Acqua Traverse overcome their strongest adversary, poverty. Individuals who are poverty-stricken are motivated to act against their moral code to achieve a higher standard of living. Some will overcome this malicious force by acting against their moral conscience. In many circumstances, humans are often given the choice to decide but in “I’m Not Scared,” poverty has sparked the ambitions of many in Acqua Traverse to become immoral.

Don't use plagiarized sources. Get your custom essay on
“ The truest evil in I’m Not Scared is poverty ”
Get custom paper
NEW! smart matching with writer

Evidently, poverty victimizes everyone in Acqua Traverse, “a place forgotten by God and men. ” Poverty portrayed in Acqua Traverse is one having insufficient materials or one lacking family genuine relationships. In comparison to Salvatore’s wealth, protagonist Michele lacks a number of valuables. When Michele visits Salvatore’s villa, he is overwhelmed by Salvatore’s soccer team toys and become deeply jealous. From this, Michele concluded that “my father doesn’t love me” which demonstrates poverty can cause impecunious people to blame others for their hardship.

Although Salvatore’s opulence dominates everyone else in Acqua Traverse, he does not often get cordial love from his family. His parents force him to play piano and just buy him presents. Moreover, he does not talk with his parents in the house and just plays with toys by himself all day. Salvatore’s father is not often at home and his mother talks with other adults in Acqua Traverse. Poverty victimizes both characters where they both question their family’s love.

Individuals are never forced but are given the choice whether to follow or act against their moral conscience in any circumstances due to poverty. Pino Amitrano, a man too stricken by poverty is driven by full of aspirations. Pino wanted the best for his family and kidnapped Filippo to earn some money. Obviously, this is a horrendous crime and the fact that people who commit these malicious atrocities are ubiquitous, “the world is wrong. ” Poverty does not create the immoral world, it’s the decisions made by humans which is why “its men not monsters” that are fearful.

Michele is in a similar circumstance as his father where they both lack wealth and want a better standard of living. Michele finds himself in a dubious position where he must choose between obeying his father and fulfill the oath he swore to him, or follow his conscience and jeep his promise to Filippo. Unlike his father, “the bogeyman”, he acts rationally. Poverty did apply more pressure to Pino than Michele because Pino was an adult and needed to take care of his family, however Pino had the chance to withdraw himself from the crime and look for other alternatives.

This demonstrates that Pino was not forced but motivated to remove his moral integrity. Hence, poverty is an evil force which deteriorates those who are motivated to behave immorally. Ultimately, the course of action from those who undergo an immoral transition due to poverty oppresses innocent people. Pino is a good man to his family because he tries to suppress the grief his family is experiencing due to poverty. However, an innocent child Filippo becomes abused from Pino’s immoral judgment. Filippo’s physical change is evident.

As seen on television, Filippo appears clean and rich but after the adults in Acqua Travers kidnapped him, he changed so drastically that it seemed “there was nothing human about him. ” Filippo appears very weak initially because of the starvation he has to deal with. “he was covered in mud and shit” reveals that he is not treated well by the kidnappers. The adults threaten to cut off his ears, “two ears we’ll cut off. Two. ” He has also partially lost his sight and vision, as the light blinds him with a slight movement of his eye lids.

Filippo is mentally damaged, shown through his talk of was bears and how he believes that his family is dead in a hole like him. Filippo has been victimized in so many ways because of the adults in Acqua Traverse who are corrupted by poverty. Furthermore, Ammaniti’s “I’m Not Scared” illustrates that those who are corrupted by poverty will not only victimize other individuals but also cause their own ramifications. Pino had to face Michele, his own son, that he was the “bogeyman. ” Towards the end of the novel, Pino attempts to murder Filippo but instead murders his son Michele.

For the loving father he is known to be, this is mentally disastrous. Moreover, Pino realizes that he had ultimately caused the turmoil of his family. Pino sacrificed his moral integrity and committed a horrendous crime to achieve money but instead is punished for his misdeeds. From this, Ammaniti demonstrates that nature is justice and this is seen in the novel when Pino is mentally deteriorated when he accidentally shoots his own son. Poverty does not only corrupt others who victimizes innocent people but also deteriorates the immoral individuals itself because of the justice of nature.

The truest evil in I’m Not Scared is poverty. (2016, Jul 18). Retrieved from https://studymoose.com/the-truest-evil-in-im-not-scared-is-poverty-essay 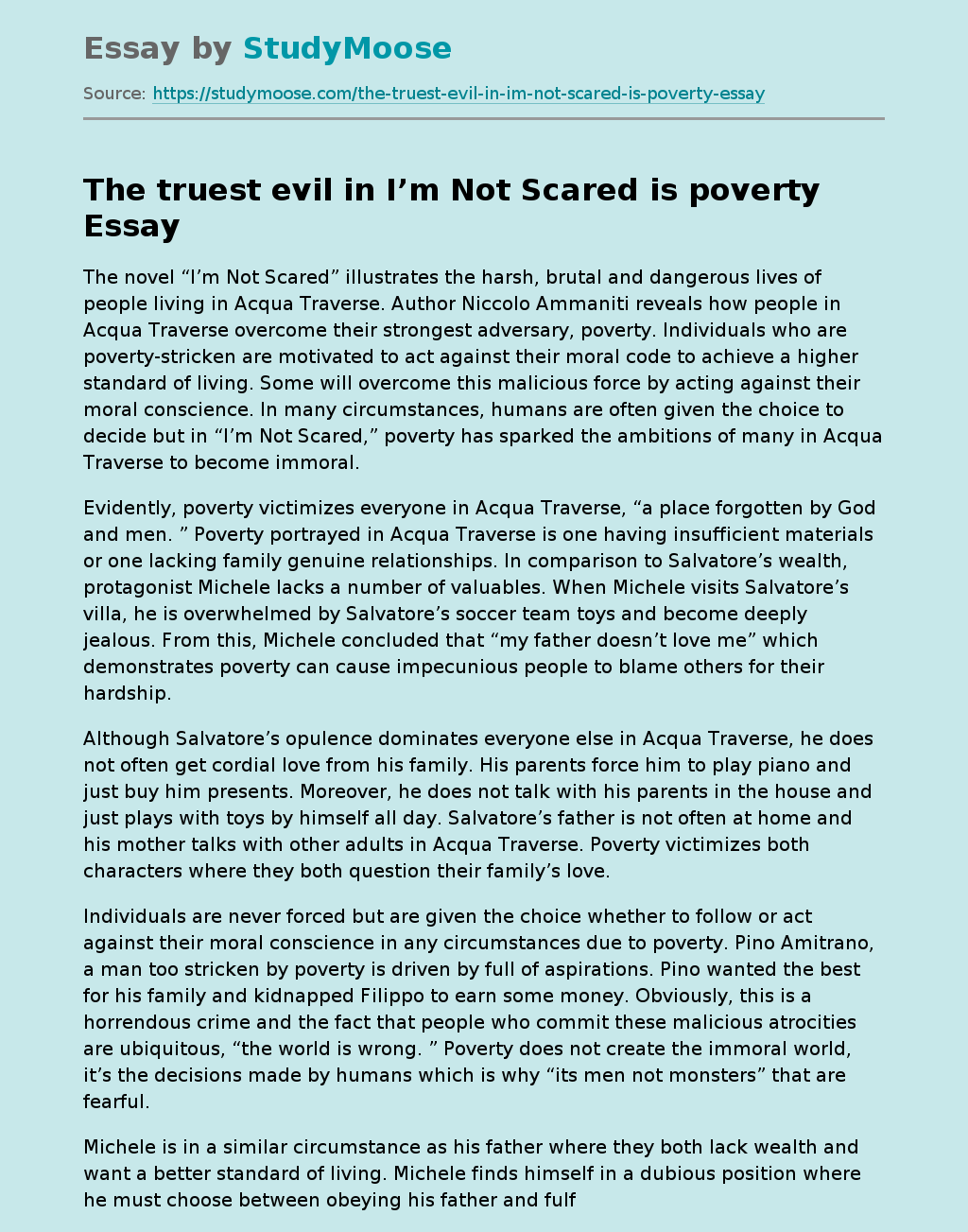