The Transformation of the Trans-Mississippi West

I. Native Americans and the Trans-Mississippi West

Sioux bands focused on religious and harvest celebrations and was complex; life was a series of circles; self torture; sacrificing; -Indians dispersed across the landscape to minimize damage to the lands;

The Destruction of Nomadic Indian Life

Results: Congress sent a peace commission to end fighting and set aside two large districts, one north of Nebraska, and the other south of Kansas, where tribes might convert to Christianity

Fort Laramie Treaty: agreed to move to reservations on the so-called Great Sioux Reserve in return for money and provisions

Indians rebelled with violence; Congress established a Board of Indian Commissioners to reform the reservation system-failed

Settlers and the Railroad

Homesteading on the Great Plains

Еhe Homestead Act: 160 acres of land to any individual who would pay a ten-dollar registration fee, live on the land for five years, and cultivate and improve it-attractive to European immigrants

Unintended: unscrupulous agents filed false claims for the choicest locations, and railroads and state gov’ts acquired huge landholdings-only 1 acre in 9 went to pioneers second problem: 160 acres not enough ample land in the arid west- the Timber Culture Act gave homesteaders an additional 160 acres if they planted trees on 40 acres, the Desert Land Act made 640 acres available at $1.25 on condition that the owner irrigate part of it within three years; also abused by speculators

Building a Society and Achieving Statehood

Cowboys and the Cattle Frontier

IV. The West of Life and Legend

The American Adam and the Dime-Novel Hero

Three Eastern men spent time in the West, each affected; Roosevelt The Winning of the West: a stark physical and moral environment that stripped away all social artifice and tested each individual’s character; Own Wister’s The Virginian: the West produces honest, strong, and compassionate men, quick to help the weak and fight the wicket; the myth glossed over the darker side of frontier expansion

Indian warfare, racist discrimination, risks of commercial agriculture, and boom-and-bust mentality; obscured the complex links between the settlement of the frontier and the emergence of the U.S. as a major industrialized nation increasingly tied to a global economy. Without the railroad, the west would have developed much slower

The Transformation of the Trans-Mississippi West. (2016, Oct 18). Retrieved from http://studymoose.com/the-transformation-of-the-trans-mississippi-west-essay 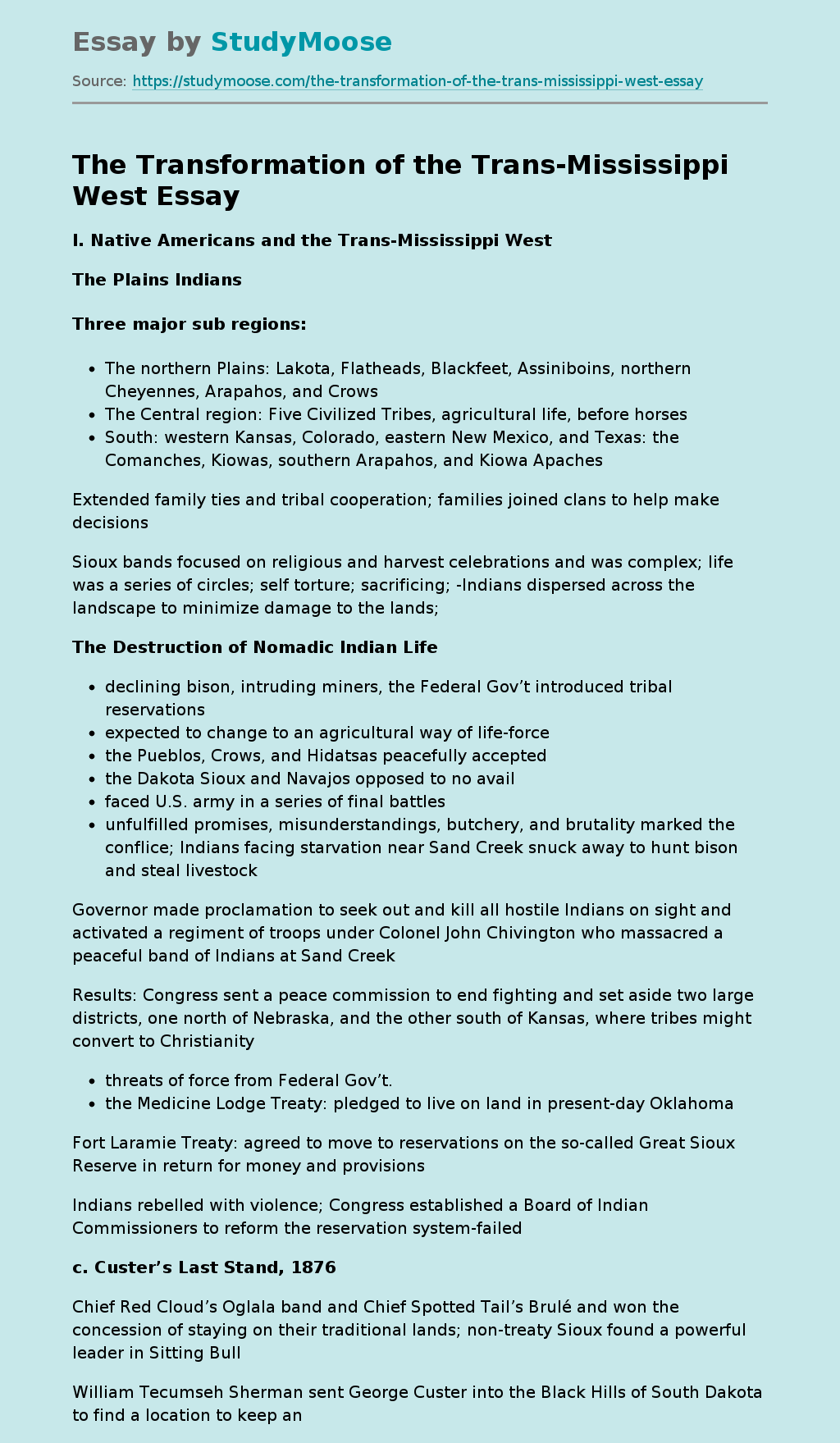