Throughout the poem, Macbeth is at a constant struggle with following his conscience in relation to moral law. Macbeth is a tragic hero because he commits murder, self actualizes, experiences external pressure, and is ambitious, which causes him to make equivocal judgments, that inevitably lead to his downfall.

Self actualization is shown by realizing that he likes Duncan and does not want to kill him. He is swaying himself back toward the right thing to do by thinking about the consequences and how there will be many parties seeking vengeance on Duncan’s killer.

Don't use plagiarized sources. Get your custom essay on
“ The Tragic Hero Macbeth ”
Get custom paper
NEW! smart matching with writer

Macbeth realizes that he is not a butcher and then says, “We still have judgement here that we but teach/bloody instruction” (1.7.8-9). He is trying to find a way to hide his emotions so that he does not raise any red flags to the townspeople, he says, ‘False face must hide what the false heart doth/know”(1.5.95-99). This shows that Macbeth is willing to put on a “mask” to hide the anxieties and horror that he will endure before and after killing Duncan.

Lady Macbeth is one of the most influential characters in this poem. She is the main source of external pressure on Macbeth throughout the poem. Lady Macbeth persuades him to continue with the scheme by exploiting his positive disposition and making him feel like he is the one making the decision. Plotting a murder against someone who you consider an ally is a lot of extra weight to carry. Lady Macbeth deceives Macbeth by making him feel more secure by saying, “I laid their daggers ready,/He could not miss ‘em.

Had he not resembled/My father as he slept” (2.2.11-13). This made Macbeth feel more secure because he believes that she is being truthful but in reality she is doing what she needs to do to grow Macbeth into the role of King.

Macbeth shows that ambition was his sole motivator and says, “To prick the sides of my intent, but only/Vaulting ambition which o’erleaps itself/And falls on th’other” (1.7.26-28). This is significant because every tragic hero has Hamartia which is a tragic downfall that causes the downfall of the hero. For Macbeth, that “flaw” was his ambitious nature. After the witches first prophecy, he was ambitious to become king even though he must perform repulsive acts of sin to get there. Macbeth says, “Be so much more the man. Nor, time, nor place/Did then adhere, and yet you would make both./They have made themselves and that their fitness now/Does unmake you.”(1.7.51-54). This shows the reader that he is not a man of his word he lets fear overcome his morals, meaning he can be easily persuaded by Lady Macbeth. If ambition to be king can cause him to stray from moral law than Lady Macbeth should have no problem doing the same thing.

Macbeth is a tragic hero because he shows Hamartia and Hubris. He is also goal-oriented, which settles on him to make bad decisions, which lead to his ruin. Self actualization played a big role in this poem and helped with the character development of the main characters, mainly Macbeth. 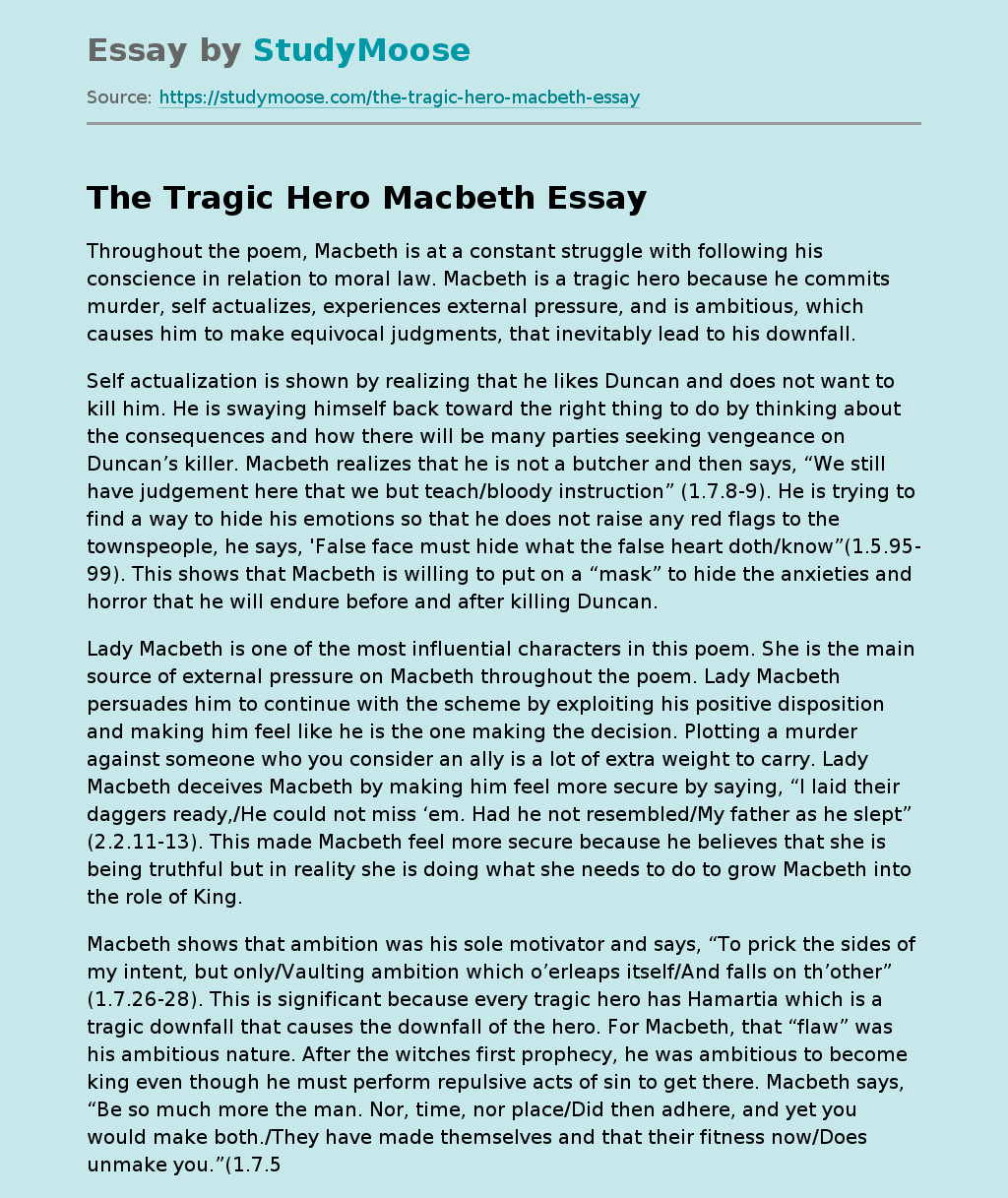