The Tragedy of Macbeth: Themes of the Play

Don't use plagiarized sources. Get your custom essay on
“ The Tragedy of Macbeth: Themes of the Play ”
Get custom paper
NEW! smart matching with writer

For example Macbeth states in act 1 scene seven, “Bring forth men-children only, For thy undaunted mettle should compose/ Nothing but males. Will it not be received ”. Macbeth is implying that lady Macbeth fearless spirit should create nothing that isn’t masculine because she is so eager for violence.

Lady Macbeth thought that if Macbeth acted more bold and violent, it makes him more masculine and strong.

As said in this quotation in act 1 scene seven, “What beast was ’t, then, That made you break this enterprise to me? When you durst do it, then you were a man;”. In the play lady Macbeth in the beginning of the play was calling on evil spirits to make her more man like so she has the ability to be violent. As said in act one scene five by lady Macbeth “Come you spirits that tend on mortal thoughts unsex me here and fill me from the crown to the top full of direst cruelty”.

This overall theme of relationship between violence and masculinity is present in this play. To lady Macbeth this theme is carried with her throughout and she shames her husband many times, questioning his manhood.

This theme was a large part of the play but so was the theme the guilts haunts the guilty. The theme guilts haunts the guilty was displayed in the tragedy of Macbeth for example in act one scene three said by Macbeth , “If good, why do I yield to that suggestion whose horrid image doth unfix my hair and make my seated heart knock at my ribs, against the use of nature? Present fears are less than horrible imaginings”. During this part in the play Macbeth almost can’t believe he is even thinking about commiting murder. The thoughts of hurting another person start to get the best of him, he does take a long time to decide if he will become a murder. Once he commits this selfish act of murder, he does have the feeling of guilt but not right away. Macbeth was first proud of himself and almost couldn’t believe he had actually done it. After Macbeth had killed Duncan he went to a dinner, and gets haunted by Duncan in act three scene two, “In the affliction of these terrible dreams. That shake us nightly Better be with the dead. Whom we to gain our peace  have sent to peace. Than on the torture of the mind to lie. In restless ecstasy. Duncan is in his grave./ After life’s fitful fever he sleeps well.

Treason has done his worst; nor steel nor poison. Malice domestic, foreign levy, nothing. Can touch him further.” During this scene Macbeth could see Duncan’s ghost. This completely scares and freaks out Macbeth because he had killed this person and now he thinks he is back to haunt him. Macbeth wishes that he could go back and Switch places with Duncan, the person he killed. He is feeling very guilty for what he had done, and his guilt is haunting him. There are so many theme that are portrayed in the play The Tragedy of Macbeth, only looking at the main few Macbeth showed the theme of the guilts haunts the guilty in many ways throughout the play. He also was the one to show the theme of the relationship between violence and masculinity. These two theme go hand and hand in the play. Macbeth was feeling guilty for the murders that he committed but lady Macbeth would always remind him of his masculinity.

To lady Macbeth his violence shows that he’s strong and has a grip on his man hood. Macbeth did grow into being more independent person when it came to the murders. Doing them with out lady Macbeth ‘s knowledge, making her not apart of the murders. After all the guilty feeling started to haunt Macbeth and also lady Macbeth. Lady Macbeth started to see blood on her hands at all time, making her wash her hands over and over to try and get the blood off. She feels guilty for the murders she has been apart of. Macbeth became so independent, and in a way that he almost had no feelings of remorse. Overall, the play The Tragedy of Macbeth was thought to have many different themes but the themes that are shown. The themes that develop and interact over the course of the play are the relationship between violence and masculinity and that the guilts haunts the guilty.

The Tragedy of Macbeth: Themes of the Play. (2021, Apr 22). Retrieved from https://studymoose.com/the-tragedy-of-macbeth-themes-of-the-play-essay 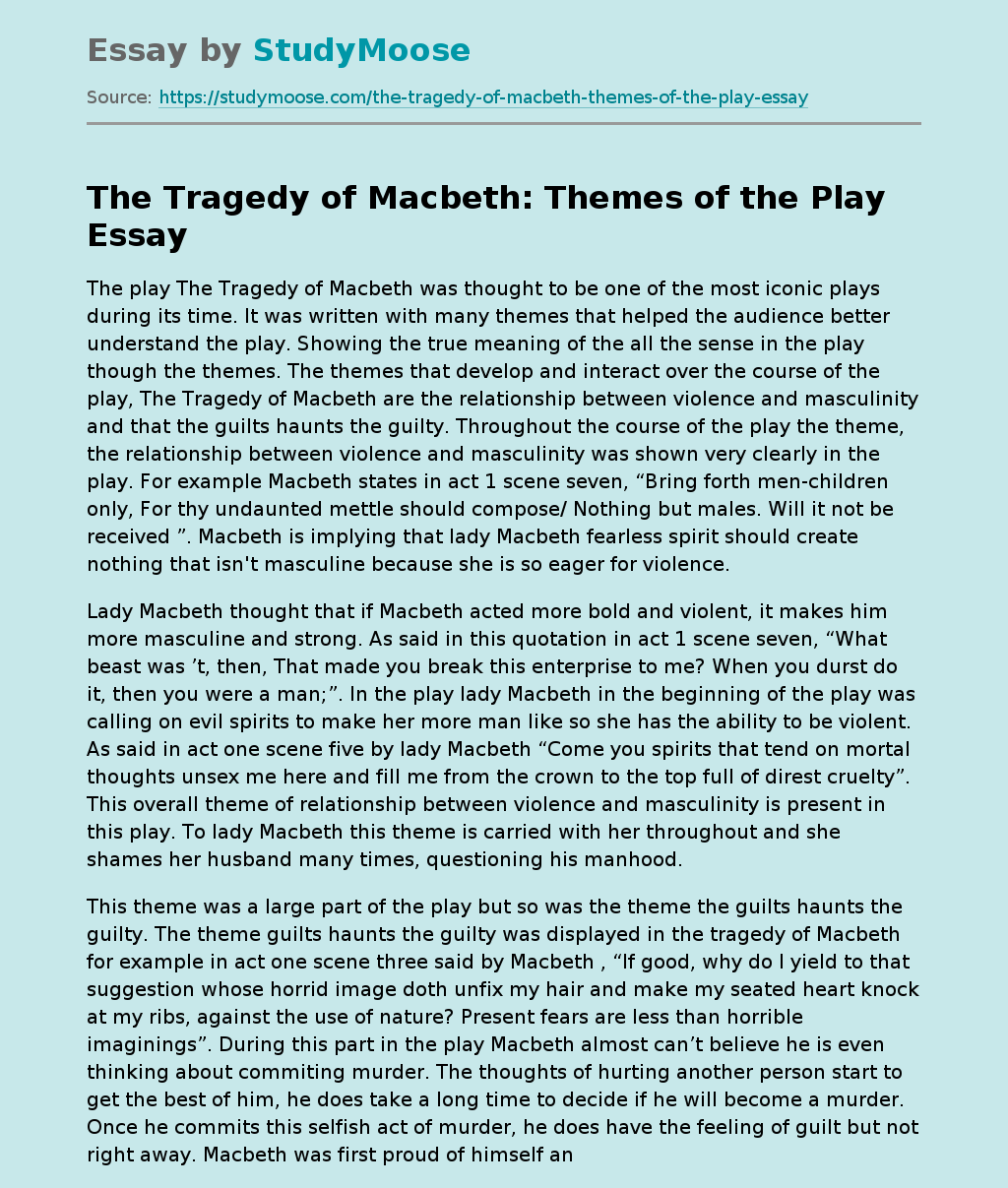