The Toughest Indian in the World is in the Closet

Sherman Alexie’s “The Toughest Indian in the World” tells a mysterious story about a Spokane Indian journalist on a quest to find his identity where he encounters his first homosexual experience with a hitch-hiking Lummi Indian male fighter. Through this story, Alexie is able to express the attitudes of sexuality in America’s society. Today, there is a sense of acceptance of overt sexuality, where one is able browse the television or Internet and discovers that all types of sexuality are all around us.

Don't use plagiarized sources. Get your custom essay on
“ The Toughest Indian in the World is in the Closet ”
Get custom paper
NEW! smart matching with writer

From billboard ads, television commercials to the MTV Music awards, there is no denying that it is amongst us.

When exceeding those limitations, society tends to answer with negative attitudes and relate back to better traditional ways.

This regression causes individuals to close off or suppress their own expressions and deny their sexual identity. In “The Toughest Indian in the World”, the main character and narrator, a Spokane Indian journalist, mirrors the American society’s attitudes of sexuality that projects a constant struggle between being open minded and closed off about our own sexual identities and expression. The American norm still stands its ground through the society, that being heterosexual is the normal, sexual identity that people should develop.

According to Gregory M.

Herek, a psychology professor at the University of California at Davis, “ In society heterosexual masculinity is prized over homosexuality and feminity” (17), when being sexually prejudice. Alexie recreates this norm by creating a dominant heterosexual male character. In doing so, the narrator tells the story of his recent sexual relations ship with his co-worker Cindy, which shows the orientation that he is interested in women who are “cute and smart, funny as hell, a good catch” (Alexie, 25), the perfect woman for most heterosexual men.

Lisa Tatonetti, who studies and writes on Queer American and Indian literatures explains that this development in the story “illustrates how the narrator’s sexual identity can be represented as unequivocally heterosexual rather than bisexual or gay despite, or perhaps because of, the facts that the bulk of the story circles around what seems to the narrator’s first gay sexual experience” (203). This depicts the pro-heterosexual attitudes that the readers will first view the narrator and ultimately parallels American society’s attitudes and views. The American Society has limitations on sexuality and can result into negative attitudes.

The narrator has a limit as well, which causes him to suppress his ideas and emotions in a negative manner. According to Herek, “Sexual prejudice, like other attitudes, is internal, inside a person’s head. It cannot be directly observed. It must be inferred by overt behavior” (18). The narrator feels the needs to pick up Indian hitch-hikers, especially males, which is not a normal pass time hobby. This odd behavior creates a struggle of what is deemed right or wrong to the narrator because there is a fear that society may not look upon this as acceptable. The narrator constantly hides the truth with himself and others around him.

Maintaining the journalist’s heterosexual identity, the narrator suppresses his emotions and feelings constantly by evading the doom of being ask why he picks up male Indian hitch-hikers. The narrator explains that when he picks them up, he never asks why they are going to where they want to go. “All that matters is this: they are Indians walking, raising their thumbs, and I am there to pick them up” (Alexie 24). This implies that the narrator won’t bother the hitch-hikers about why they are going to where ever they need to go, in hoping that they won’t ask him why he picks up so many male hitch-hikers.

The narrator evades the fear of being questioned, and cleverly makes it sound like he is a full-time Good Samaritan with the many random strangers he encounters. The struggle of suppressing his truth becomes a constant fear that he must hide from his friends as well. His co-workers at the newspaper know that he picks up hitch-hikers but nor do they understand why. “Maybe I could explain to them why, but who wants to try? Instead, if they ask I just smile and turn back to my computer. My coworkers smile back and laugh loudly.

They’re always laughing loudly at me, at one another, at goofy typos in the newspaper, at the idea of hitch-hikers” (Alexie 24). Amongst his co-workers, he fears of being ridiculed and laughed at, but more specifically about his queer intentions. The narrator cannot express himself and accept himself because of the clear negative attitudes that he internalizes due to the hostile heterosexual co-workers. The narrator’s internal fight manifests to a physical worry after having his sexual encounter with the fighter. “Feeling stronger, I stepped into the shower and searched for my body for changes.

A middle aged man needs to look for tumors” (Alexie 33). He still does not believe that, throughout his suppressed desires and destined sexual act, he is a homosexual. By making sure, he searches his body for marks, a physical stigma that would identify him with the homosexual group he fears to be identified with. The American society has developed a social stigma against homosexuality. Social stigma means extreme disapproval of a person or group on socially characteristic grounds that are perceived, and serve to distinguish them, from other members of a society who differ from their cultural norm.

The narrator shares this belief despite having sexual interactions with another male. Herek states that the “American society share the knowledge that homosexual desires and acts are considered bad, immature, inferior and sick compared to heterosexuality” (14). Stigma alone means a mark of disgrace with a particular circumstance, quality, or person, according to Webster’s dictionary. Without a physical mark and no one to say, including himself, that he has homosexual tendencies, what does he call it? What does the American Society call it? Sexual stigma is not always associated in a negative way.

A homosexual interaction, and this being the narrator’s first time, is an act of experimentation. Herek agrees that, “Some homosexual acts, such as participation by groups of males in homoerotic fraternity hazing rituals and ‘gang bangs,’ may be defined by the participants as male bonding or as heterosexual, not homosexual” (15). It is difficult to place where the narrator stands, whether this act is experimentation or desire. “For reasons I could not explain then and cannot explain now, I kicked off my underwear and rolled over on my stomach” (Alexie 32).

Once the condom is in place the fighter asks, “Are you ready? ” to which the narrator replies, “I’m not gay” (Alexie 32). By suppressing his homosexuality, the narrator cannot explain his actions and makes it clear, at the moment of penetration; finally he says he is not gay. American society makes a bad environment for all individuals, like the narrator, to find their identity and possess great strength in influencing others with generations of shared ideas and thoughts about gender inequality, race, and sexuality.

It becomes so hostile that individuals internalize negative thoughts that inhibit our feeling and actions and engulfs the person that we are born to be, a suffering for individuals in any identity crisis. We need to move on from this hostility and oppression. Like in Alexie’s work, we need to explain that the hostility related to homophobia, sexual prejudice, and social stigma, impacts all individuals in a negative way, so that we can influence a new generation to love and nurture who we are born to be.

The Toughest Indian in the World is in the Closet. (2016, Jul 03). Retrieved from https://studymoose.com/the-toughest-indian-in-the-world-is-in-the-closet-essay 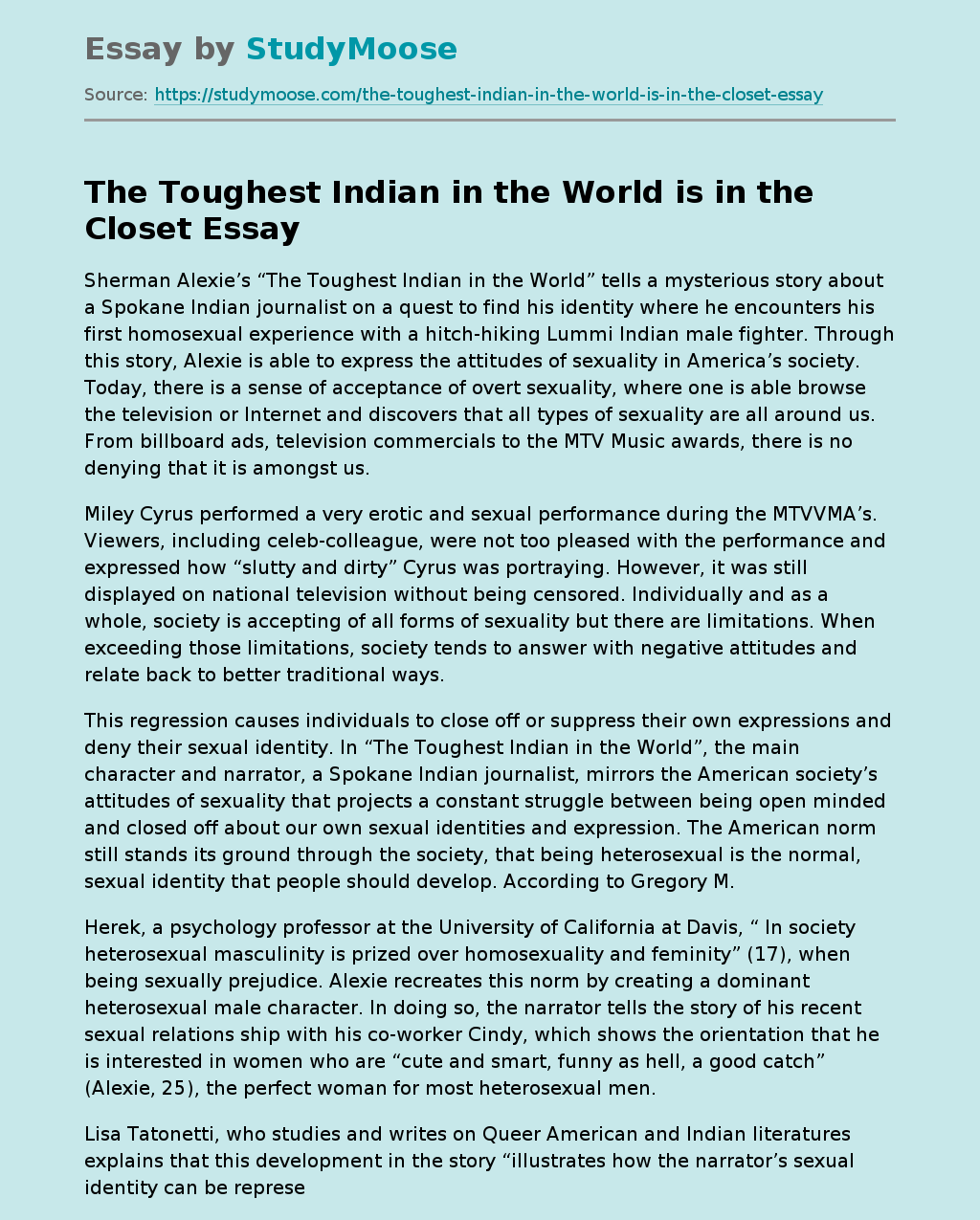