The Three Faces of Shylock: The Villain, the Victim and the Catalyst

Shylock, the Jew, is the most memorable and controversial character in Shakespeare’s The Merchant of Venice. In the course of the four centuries that have elapsed since the first presentation of this work, the portrayal of Shylock has become a mirror of each succeeding Christian society’s attitude towards the Jewish community in their midst. One of the most popular theories is that Shakespeare was pandering to the anti-Semitic views of the Elizabethan era when he penned this comedy. The possibilities of honing Shylock’s persona are vast.

Don't use plagiarized sources. Get your custom essay on
“ The Three Faces of Shylock: The Villain, the Victim and the Catalyst ”
Get custom paper
NEW! smart matching with writer

The portrayal of Shylock the Villain requires the least amount of theatrical talent for an actor. All of the pitiful, anti-Semitic conceptions of a typical Jew would be employed. A false nose accompanied by loud, Yiddish accented speech, and a slovenly appearance would be emphasized.

There are two subdivisions of Shylock the Villain. At this juncture, we branch off into two entirely different perceptions; the concept of a comic villain and the concept of a somber and serious villain.

The comic villain would certainly add a red fright wig to his costume. A knowledgeable audience would understand the obvious reference to Judas of Iscariot and the less sophisticated portion of the audience would simply revel in the comic appearance of red hair on a Jew since they are usually portrayed with very dark hair.

The comic villain would deliver his lines in a boorish and overbearing manner. Shylock’s devious nature is clearly shown as he woos them with street humor. “Of your fair flesh, to be cut off and taken in what part of your body pleaseth me,” is an excellent example, for in the Elizabethan era “flesh” was a well known euphemism for “penis.”

The serious villain would be costumed identically to the comic villain with the notable absence of the red wig; the nose and Yiddish accent would remain the same. This villainous Shylock does not employ any overt tactics to seduce the audience. Shakespeare provides this Shylock with an introduction that leaves us no choice but to label him a villain. He speaks an “aside” before engaging in a conversation with Bassanio.

I hate him for he is a Christian

But more for that in low simplicity

He lends out money gratis, and brings down

The rate of usance here with us in Venice.

Shylock is materialistic to the core and appears more concerned about the loss of his ducats than the flight of his daughter, Jessica. “My daughter! O my ducats! O my daughter!” and “I would my daughter were dead at my foot, and the jewels in her ear” spill out of his mouth like a true villain.

The most intense challenge for any actor playing Shylock as a villain would be his approach to the scene with Salario and Salanio. The words cry for compassion from the audience and are easy to achieve by utilizing a totally sympathetic approach. The Villain must avoid this interpretation, for here it is key that the actor overplay his hand; he must appear to the audience as simply mouthing these words and all the while not being a participant in any act of sincerity by any stretch of the imagination.

Playing Shylock as a single faceted villain would be enhanced by the spin the actor gives to the trial scene. There can be no hint of turning Shylock into a hero; he must be steadfast to the portrayal of total villainy. This Shylock must not accept the final judgment with bravery or seem the slightest repentant; he will, instead, leave the courtroom whining like a coward.

There is an analogous reference to this dreadful sentence that Shylock brought upon himself. It comes earlier in the drama when the inscription on Portia’s silver casket is revealed…. “Who chooseth me shall get as much as he deserves.”

This Shylock would have a well-groomed beard and would wear simple, tidy, black attire including a yarmulke. He would have a touch of the rabbinical in his appearance; this man is a devout Jew. When Bassanio proffers a dinner invitation, Shylock upholds his beliefs by admitting he would conduct business with Christians, “but I will not eat with you, drink with you, nor pray with you.”Shylock’s speech to the two minor characters Salerio and Salanio is the heart and soul of the victim premise. Here, the actor should pull out all of the stops and gain the sympathy of the audience. It should be noted that Shakespeare has accomplished two things with this scene. He has pretentiously rid himself of any guilt of commercializing anti-Semitic bigotry with this production, and, at the same time, he has demeaned the Jew by having Shylock articulate this passionate speech to two totally insignificant members of the cast. Shakespeare has covered all bases.

The Victim’s claim to Antonio’s pound of flesh would place the emphasis on the physical area nearest the heart. This Shylock must convince the audience that a pound of Christian flesh is less than equal to the humiliation and persecution suffered by the Jewish community. The Christians are the villains. The courtroom scene provides more evidence that Shylock is the victim. His devotion to his religion, augmented by the only way society allows him to accrue any amount of ducats, justifies this hypothesis. We feel compassion when learning that a memento of his beloved wife, Leah, was taken from him.

The audience is sympathetic to Shylock’s plight when the court strips him of his whole being; his religion, daughter and wealth. The added humiliation of forcing him to become a Christian is unbearable. The Victim’s final exit is punctuated by wails of despair. The second analogous inscription, appearing on the lead casket, seems eloquent and completely appropriate for the circumstances. “Who chooseth me must give and hazard all.” Another gem resides within the casket. “Since this fortune falls to you, be content and seek no new.”

This is the only portrayal of Shylock that lends itself to being done in modern dress. The Catalyst is attired in a beautifully handcrafted, black, muted pinstripe suit. The total effect is subtle, not flashy. A soft medium gray shirt, a burgundy repeat pattern necktie, black Gucci classical shoes, and one small clue to his ethnicity…a black 1950’s Borsalino fedora.

This Shylock has at his core….bitterness. Though he does not hate him for he is a Christian,” he does not wear his inheritance of persecution and homelessness well. The Christians do not trust him or his kind, for the Jews have made far too many profitable inroads into their previously well controlled society. The threat is dichotomous by nature and design. When Shylock avows that he will not eat, drink, or pray with Christians, he convinces the Venetians that it is because of his religious tenet, but he simultaneously allows the audience to know that it is because of his bitterness towards gentiles.

Shylock the Catalyst is not a buffoon, villain or victim. He is the very visage of reality. The Antonios and Bassanios of Venice are feeling threatened by the need to learn how to coexist with the Jews and their inability to do so. The Catalyst probably sees the pound of flesh as more of an allegorical circumcision. A circumcision where the tables are turned and the Christian must pay homage to Jewish law and ritual. A Right of Reversal.

The Catalyst’s focus on money and possessions works well with a modern adaptation of The Merchant of Venice. The underlying issue of envying those who achieve monetary success remains with us today. This drama is a conceivable examination of an entire society; Jews and Christians alike. The inscription on the third and golden casket, “Who chooseth me shall gain what many men desire,” works well with this interpretation.

A portrayal of the Catalyst Shylock requires an actor of considerable ability and depth. Each singular Shakespearean play is a director’s dream. Given an even playing field of competent actors, the Bard’s words lend themselves well to a myriad of interpretations. If only a director could change the events…for this final Shylock is a braver man than Shakespeare has allowed. His Shylock cared more about life than honor. He gave up too easily to the pressures of the Christian court. This “Catalyst” cares more about honor than life. This Shylock the Catalyst is figuratively hauled “kicking and screaming” from the courtroom. He would rather die than renounce his heritage and feign being a Christian. Shylock the Catalyst will always be true to himself. Shakespeare missed the boat. He not only wrote for the common man, he could not rise above venerating common injustice.

The Three Faces of Shylock: The Villain, the Victim and the Catalyst. (2021, Dec 07). Retrieved from http://studymoose.com/the-three-faces-of-shylock-the-villain-the-victim-and-the-catalyst-essay 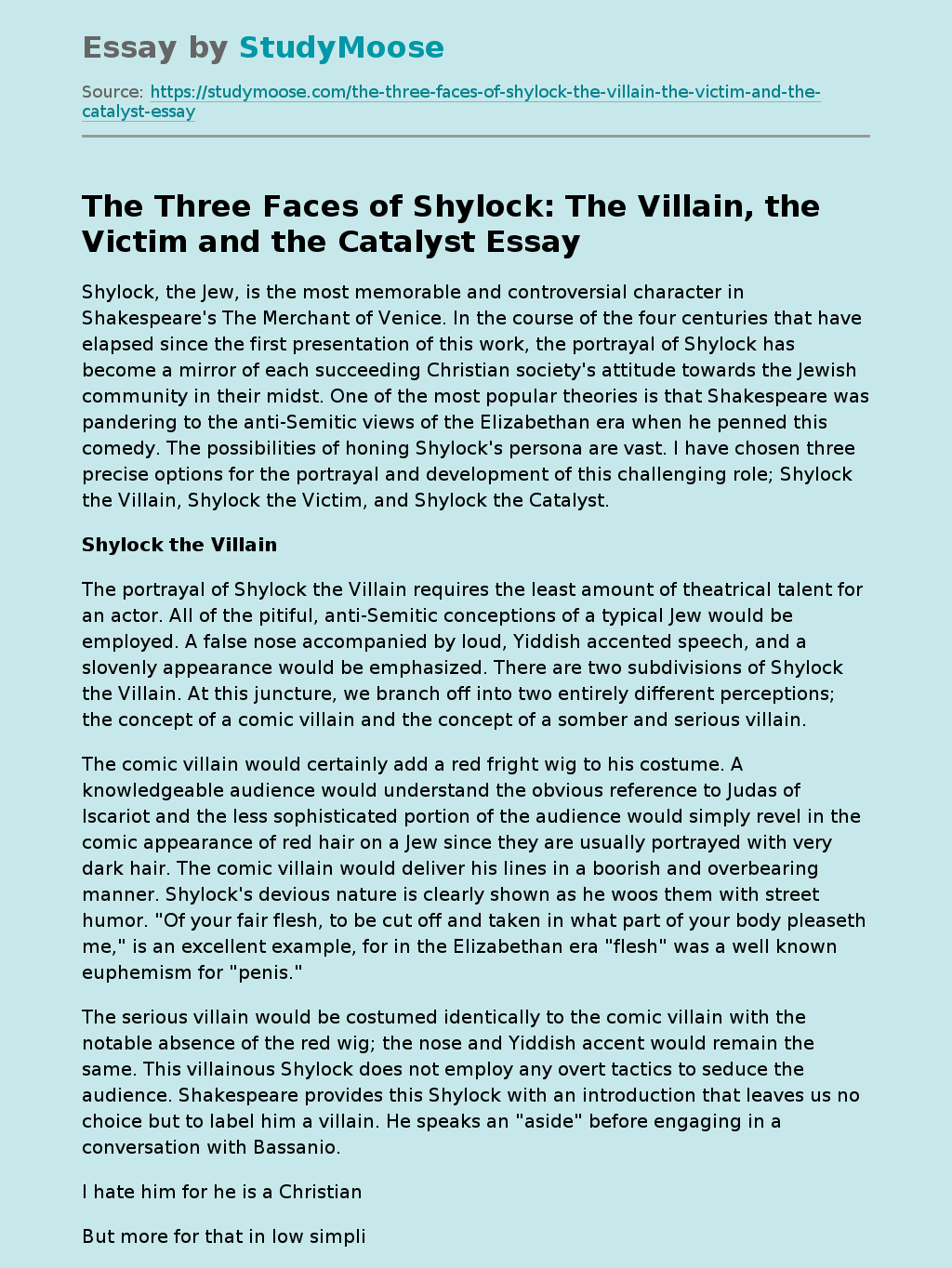