“The Things They Carried”

In “The Things They Carried,” Lieutenant Jimmy Cross is torn between being a good leader to his soldiers and his love for Martha, thus making him a truly dynamic character. A dynamic character is someone who undergoes an important, internal change because of action in the plot. For example, personality or attitude would be two that play a role in against Lieutenant. Jimmy cross shows us in the story just what a dynamic character is, and I am going to explain how he acts before the climax and how he evolves after.

Don't use plagiarized sources. Get your custom essay on
“ “The Things They Carried” ”
Get custom paper
NEW! smart matching with writer

Dreamy Lieutenant Cross must lead his men through rice paddies in Vietnam. No matter how hard he tries to be a good leader, he cannot stop fantasizing about Martha. He would rather be back in New Jersey with her, a girl who does not love him back.

The hardest thing that Lieutenant carries is his emotional attachment to her. It tortures him that she doesn’t feel the same way, but she never will.

His love for her is to the point it’s an obsession. As it mentions in the story all the soldiers carry all their necessities they want to make them feel warm and at home, whereas, Jimmy Cross carries in his wallet two photographs of Martha. It reads, “The first was a Kodacolor snapshot signed love, though he knew better,” and “The photograph had been clipped from the 1968 Mount Sebastian Yearbook.” We can see this whole dream the he carries around with him distracts him from his job.

Throughout the whole story Lieutenant Cross struggles to stop thinking about Martha and start being a better leader to his soldiers. Although he proves to us he is so wrapped up in his fantasies; it takes the death of Ted Lavender for Lieutenant Jimmy Cross to open his eyes and snap out of it. Cross believes he could have prevented it if he wouldn’t have been thinking about Martha. There he decides he has to learn to think only of his job in the field. He will never forgive himself for mistaking the responsibility of his men. Jimmy Cross was being selfish and his now paying for it by having to go on throughout the day missing a soldier. Martha had a way of leading on Jimmy Cross and to allow his love for her to grow.

The letters she sent in the mail, the pebble she sent him, and to the words separate but together quality can make Jimmy Cross very distracted. A lot of times its easy to just get your hopes up and to think about that daily non-stop. Jimmy had a love for Martha that she didn’t ever give back. Often leading him to get his hopes up. I suppose it would be hard to be so far away and just to have that someone you know will be there when you get home and to love you like you love them. That’s all Lieutenant Jimmy Cross wanted. However to overcome all this he burns all of Martha’s letters, throws the pebbles away, and concentrates on being a leader he was supposed to be in the beginning to his soldiers.

“The Things They Carried”. (2016, Jun 19). Retrieved from http://studymoose.com/the-things-they-carried-essay 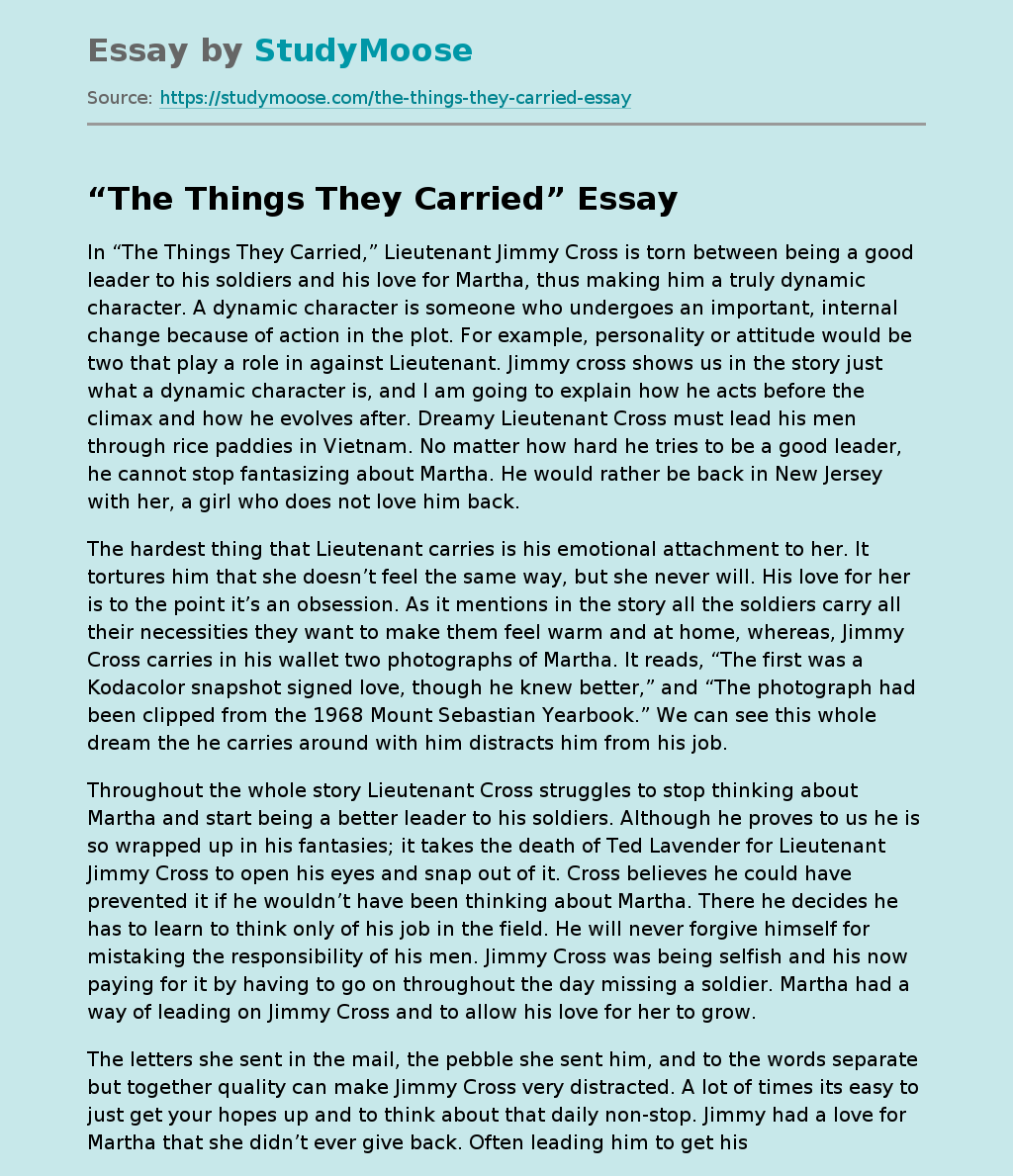