The Things They Carried, by Tim O’Brien

The Red Badge of Courage, by Stephen Crane, and The Things They Carried, by Tim O’Brien, are two novels set a century apart, yet they both connect to one another. Tim O’Brien’s novel illustrates his experience in the Vietnam War, while Stephen Crane’s novel demonstrates his experience in the Civil War. These two novels focus on the image one gives himself while going into the war and image one gets going out of it, whether one makes it out alive or gets consumed by it.

Don't use plagiarized sources. Get your custom essay on
“ The Things They Carried, by Tim O’Brien ”
Get custom paper
NEW! smart matching with writer

In these two novels the concept of being a “coward” made a big factor in the way they say themselves. Both Henry Fleming from, The Red Badge of Courage, and Tim O’Brien from The Things They Carried, had a different reason for considering themselves a coward. Tim O’Brien was drafted to the Vietnam War, a war which he didn’t believe in, nor wanted to participate. He left everything behind and was on the verge of fleeing to Canada.

He didn’t want to lose everything behind, his family, his friends, and his home.

Tim wanted to be brave, leave everything and flee so he wouldn’t participate in the war, but that wasn’t the case. “I would go to the war—I would kill and maybe die—because I was embarrassed not to.” It wasn’t fear or morality that Tim had, he just couldn’t leave everything behind and flee. “I was a coward. I went to war.

” In Henry’s case, he enlisted to the war. He wanted to be hero in this war, like he had always imagined. Soon he realized that all he was, was a pawn on a chess board. He was a mere soldier. Once things got tough in the second battle he was in, he fled. Henry couldn’t get the image of himself as a coward. All he was was a coward, for fleeing.

Henry had all this guilt inside him, for fleeing and lying about a fake battle scare he had got. When he finally regrouped with his squad they encountered a small battle. Trying to push back the enemy, soldier after soldier kept firing their rifle including Henry. Henry had got consumed into the battle, reloading then firing. He repeated this even when the enemy had already fled. “He lost sense of everything but his hate, his desire to smash into pulp the glittering smile of victory which he could feel upon the faces of his enemies.” Henry was consumed in the moment of battle, shooting eagerly at his enemies. After this small battle, the lieutenant called him a “war devil.”

While in the other novel, Mary Anne, a 17 year old girl, was brought into the war zone. She stayed with her boyfriend Mark Fossie. She would roam around the woods, fascinated by the nature. Over time she wasn’t even recognizable, with her necklace of human tongue. She was no longer that innocent girl that had first came to the war. “She had crossed to the other side. She was part of the land.” There are different ways for which one could get consumed by war. For Mary Anne, she became one with the land.

There are things and feeling that go on though war, that one would only go through or feel in war. Both Henry and Tim witnessed deaths throughout the novel, whether they knew the person or not. War really changes a person, mentally and physically. One would go into war with a clear image of himself and come out of the war with another.

These two novels demonstrate how war changes the image you give yourself, whether you get consumed by war or make it out alive. Both Henry Fleming and Tim O’Brien had to go through obstacles, changing the way they see themselves and the way others see them. These novels may be set a century apart, but they connect in so many ways.

The Things They Carried, by Tim O’Brien. (2016, Oct 04). Retrieved from http://studymoose.com/the-things-they-carried-by-tim-obrien-3-essay 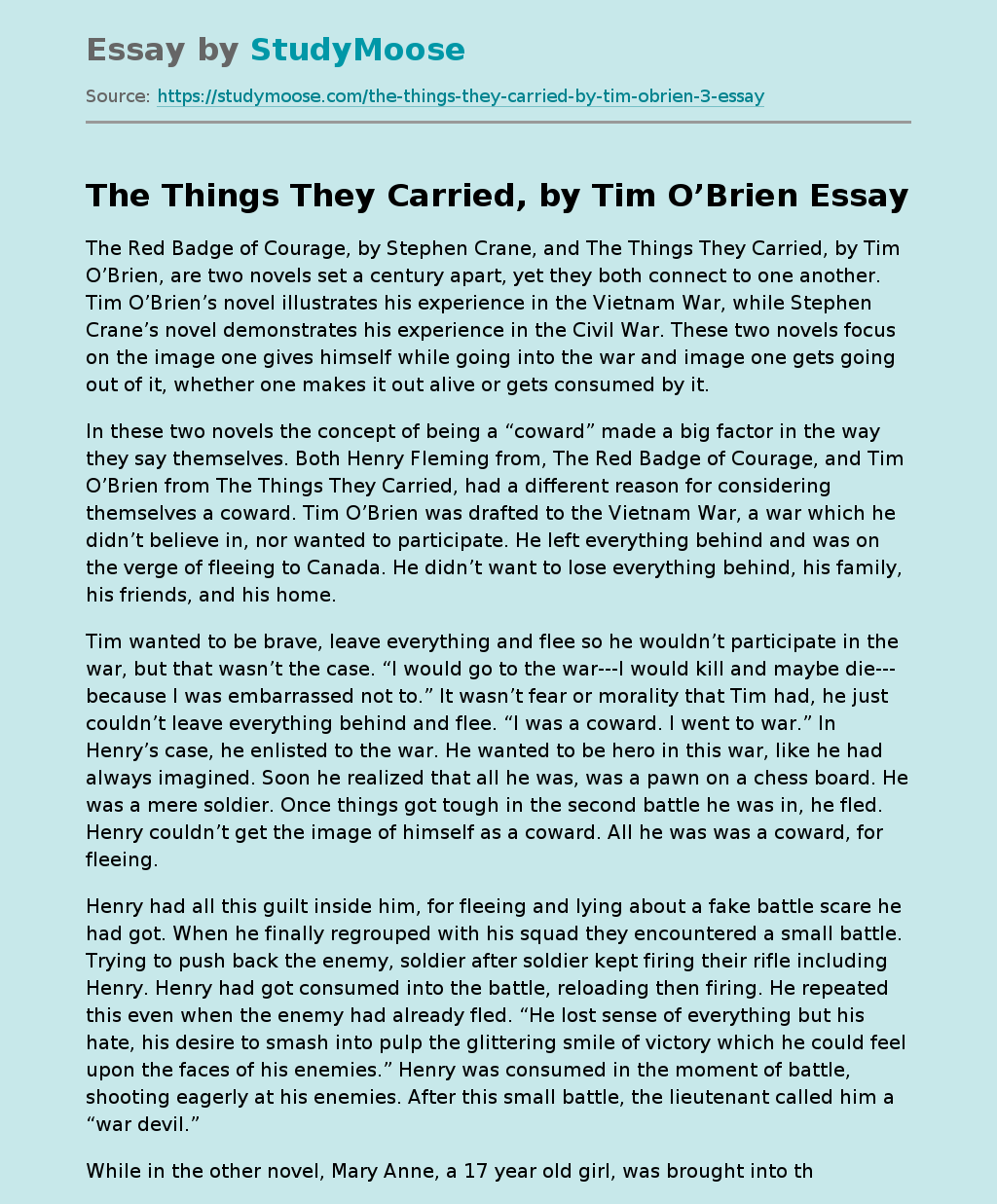