The Themes in Tiger in the Tunnel

Ruskin Bond is an Indian author of British descent. He was born in Kasauli, Himachal Pradesh, on May 19, 1934 and grew up in Jamnanagar, Shimla and Dehra Dun. He is considered to be an icon among Indian writers, children’s authors and a top novelist. He wrote his first novel, The Room on the Roof, when he was seventeen. For this, he won John Llewellyn Rhys Memorial Prize in 1957.

Since then he has written several novels, over 500 short stories, as well as various essays and poems, all of which have established him as one of the best-loved chroniclers of contemporary India.

Turn in your highest-quality paper
Get a qualified writer to help you with
“ The Themes in Tiger in the Tunnel ”
Get high-quality paper
NEW! AI matching with writer

Some of his famous stories are The Night Train at Deoli, the Blue Umbrella, Room on the Roof, Our trees still grow in Dehra and many more…

In 1992, he received the Sahitya Akademi award for English writing, for his short stories collection, “Our Trees Still Grow in Dehra”. He was awarded the Padma Shri in 1999 for contributions to children’s literature.

He now lives with his adopted family in Landour near Mussoorie.

THE PLOT
The story “The Tiger in the Tunnel’ symbolises the struggles and hardships that a poor family has to go through, the courage and determination they display and finally, in spite of the tragedy and sense of loss that they experience, life still goes on.

The setting of the story is in a thick jungle in a hilly landscape with an eerie atmosphere. Baldeo, the protagonist of the story, was a tribal who worked as a ‘khalasi’ at a small wayside signal post.

He was responsible for signalling whether the tunnel through which the Over-mail train passed was clear or not. He lived in a small hut near the station with his daughter and son, Tembu and their mother. However, Baldeo is killed by a tiger and soon Tembu, in spite of the tragedy, takes over his father’s duties and life goes on.

THE THEMES
“The Tiger in the tunnel” can be viewed through many themes. Among others, the four main themes are ‘Courage’, ‘Continuity’, ‘Sense of Duty’ and ‘Cycle of life and death” .

“The Tiger in the tunnel” depicts the Courage & the trials & tribulation of ordinary men like Baldeo who symbolizes this. In spite of the many tales of wild animals and the infamous tiger termed, a man-eater who was said to frequent the tunnel Baldeo courageously faced the dangers of the jungle. On seeing the tiger, Baldeo didn’t take to his heels but bravely faced it head on as described by the writer – “With a marvellously agile leap he avoided the paw and brought the axe down on the animals shoulder”. His axe too was a source of his confidence. His son, Tembu, too showed this quality as ‘he sat beside the body of his father’ ‘unafraid of the darkness guarding the body from jackals and hyenas until the first faint light of dawn brought with it the arrival of the relief-watchman.’

Ruskin Bond also brings out the theme of Continuity through the story. Upon the death of Baldeo, in spite of the tragedy Tembu resumed the responsibilities of his father and took up the job as a ‘khalasi’. He felt secure as he had his father’s axe with him. Thus, life went on despite all the dire circumstances. The axe symbolizes this continuity, handed down by generation of the tribal’s one after another.

The storywriter has very deftly depicted the Sense of duty shown by Baldeo when he lays down his life in for duty’s fate, so that the train, the Over Mail , may travel safely with all its passengers. He longed to go back to his warm hut during his job but he knew he had to fulfil his duty. Tembu too symbolizes this, by his quick adjustment to being the breadwinner of his poor tribal family and taking up the duty of the night guard after the death of his father.

Another theme of story is the existence of the cycle of life and death. Ruskin’s story is an unblinking depiction of this harshness of life. Although the story momentarily leads us to suspect that Baldeo will prevail in his combat with the tiger, the story lacks a fairy-tale ending. Baldeo is killed, but the tiger dies as well. Each is overwhelmed by a superior force. The story shows that death is an inevitable part of life, for all creatures. It also shows that in spite of loss, obstacles and hardships, life still has to go on.

Thus, in summation, we can say that ‘The tiger in the Tunnel’ is such a story of heroism that it knocks on the conscience of people who grumble about their life. It shows that ordinary people in ordinary jobs can play such heroic roles in life and that life doesn’t need extraordinary and special circumstances to excel.

The Themes in Tiger in the Tunnel. (2016, Mar 23). Retrieved from https://studymoose.com/the-themes-in-tiger-in-the-tunnel-essay 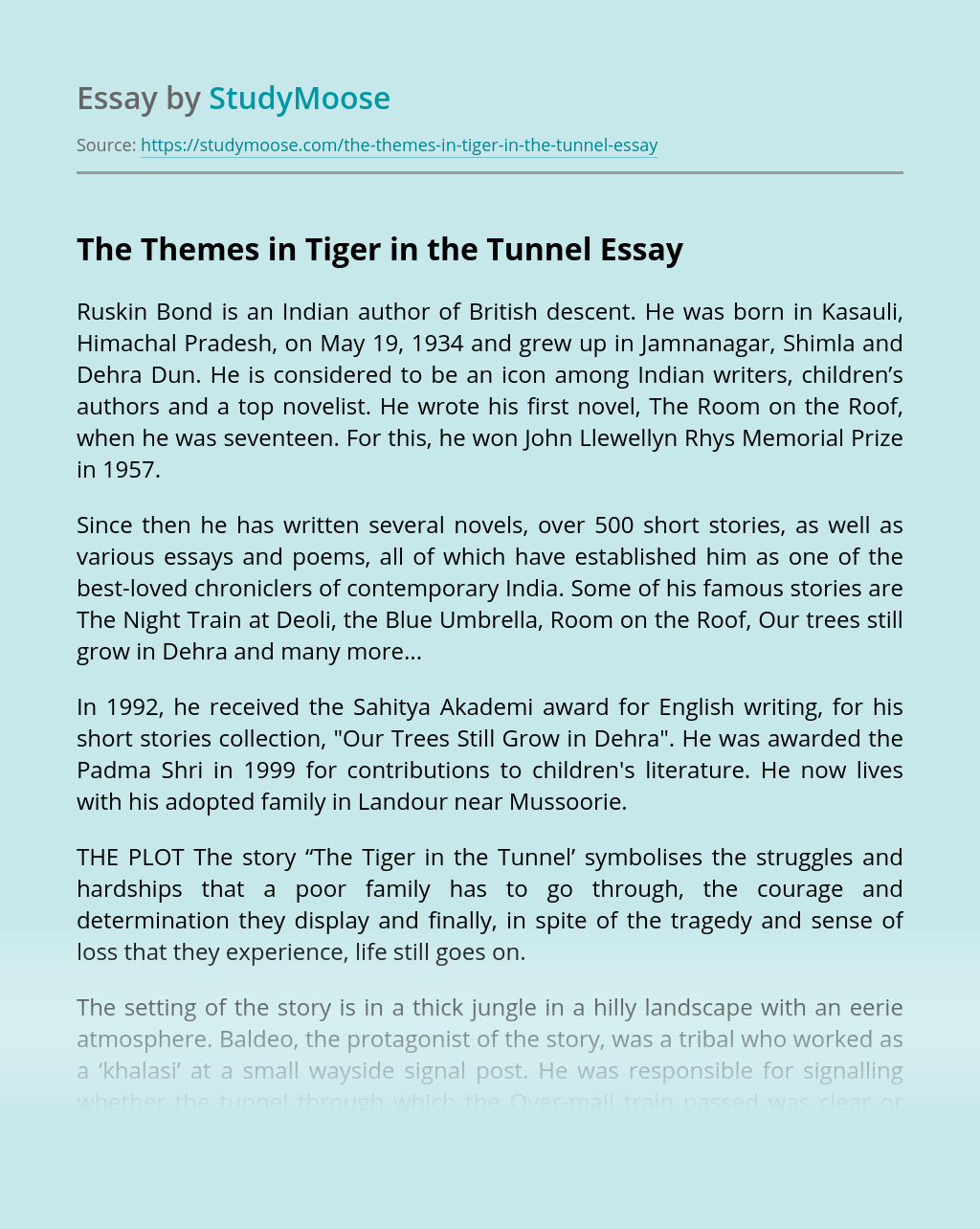 Turn in your highest-quality paper
Get a qualified writer to help you with
“ The Themes in Tiger in the Tunnel ”
Get high-quality paper
Helping students since 2015
Stay Safe, Stay Original