The Theme of Power in Macbeth

Macbeth is a character who changes his ways through the influence of others. He does many things throughout to cause corruption and tragedy. Macbeth does hurt everyone in this story including himself. Macbeth is called a bold person and is rewarded in the start. The characteristics of Macbeth are  smart and noble. This specific action costed Macbeth’s level of stability to continually decrease as he starts to realize the cost of his actions. Macbeth tries to forget what he has done and be the person that barks out the orders.

Don't use plagiarized sources. Get your custom essay on
“ The Theme of Power in Macbeth ”
Get custom paper
NEW! smart matching with writer

As we start to see Macbeth being a wise decrease, as we begin to see Macbeth continually questioning his decisions, and he tries to cover his actions up but only confuses others. Macbeth’s pride is now very noticeable later on. This shows his ways are well seen in Act IV, he goes to see the Witches, with no reason to. His pride is the main cause for all of his problems.

After becoming king from the mess he made of King Duncan, you can see Macbeth’s behavior completely change – from someone who has a clue what he is doing. Macbeth’s behavior changes drastically from the beginning to the end. As the play begins to get more intense due to Macbeth’s want for power, we start to see how Macbeth chooses to move from his wife. This place in time is where Macbeth starts to act different by going to the witches for help instead of anyone trustworthy.

So his behavior and actions have changed as he now does not go to a situation with caution, but as if he is a King in power. His distance from Lady Macbeth results in Macbeth’s thoughts to be seen through his soliloquies. When his actions start to happen quickly, he starts to sense differently about being caught or seen as a killer for power. Macbeth does not want people to question what he has done because he is already slowly losing his sanity. accordingly, Macbeth’s actions increase worse, when he hires people to kill Banquo and Fleance. This is part of the reason to the fact that they were people to take caution to Macbeth’s rule.

Macbeth’s behavior is believed to be seen to be ruthless, blood hungry and a shame to someone in power.  Macbeth changes to a basic psychopath that has his ‘strong’ hold over Lady Macbeth. Even though Macbeth’s eagerness is starting to show to Lady Macbeth, it is really obvious that it is making him want to hurt a lot more people. Macbeth is not a bad person until he gets greedy and wants more power without realizing his consequences. This play shows that people’s natural desires often overcome what a true person is satisfied by. Unfortunately ,the writer is trying to convey things through the person of Macbeth, as when he says that it is not a bad thing to be greedy, but to be too greedy will make a person create their own suffering.

To continue, in Act III, Macbeth tells all the kings around to come to a dinner of some kind in the , his ways get very strange, because of his actions. through the part of the play Macbeth starts to see Banquo in his apparition and moves with this by screaming, creating attention from Kings who are present. Macbeth’s crazy behavior is creating a vibe in the play, as Macbeth makes the reader to see his mistakes will reassure what people will think of him. His behavior has drastically differed from being respected, known to a person who only cares for power and to a man who is just letting people let him know of his own suspicion. Macbeth is scared of what he has done down to himself, and starts to believe his despicable actions have costs. As a result, through the continuous changes of Macbeth’s actions, we begin to see trend on this mess he has created. Macbeth’s behavior is because of suspicion by the Kings and by Macbeth’s use of his power. When the play slowly gets going the audience is able to start to see on Macbeth’s crazy changing thoughts. Through his soliloquies, it was clear to the listener that the simple reason in what Macbeth does not have is the ability to make is own decisions. This perk of being smart makes up for the looks that Macbeth has for power.

To start, Macbeth had great thinking in which was not in doing of killing Duncan. So, as his actions and ways change so will Macbeth’s brain and hands . Looking in on Macbeth’s metal ways from a basic stand point, Macbeth’s gruesome ways are involved within what he thinks. There is a lot of clues in the script that support this. One is  right following Macbeth killing Duncan, Macbeth was trapped in a pool of self-pity. His pity can be seen when he does not respect Duncan after he kills him. His  disbelief and how scared he is has led Macbeth to allow crazy things to happen. This is an important part of script, as when we realize Macbeth’s faithfulness and love, the audience sees that Macbeth can not sleep because he is too caught up in what he has done. Additionally when Macbeth begins to turn disgraceful act with his life. the audience is likely to see Macbeth’s greedy side. this is seen through Act III, when Macbeth invites the other Kings to come over and eat. As Macbeth sees Banquo’s apparition, he starts to feel really scared, and worried because of the serious relationship Banquo and him have created.

The vision of Banquo’s soul comes due to the thoughts of Macbeth really affecting him. Through the way in which Macbeth acts to Banquo in his apparition, the audience can  see some  of his guilt obviously because to how Macbeth wanted him and his son to be dead. Macbeth’s thoughts on the hanging dagger, is a very strange hallucination in that shows  from the instant regret of the killing of Duncan. The dagger takes the place of a large amount of uneasiness as Duncan’s killing is dwelled on. As Macbeth sees that Banquo knows the witches apparitions, he quickly wanted Banquo and the son Fleance to be killed, so this would not allow him and his secret to be told to everyone. Macbeth’s thoughts have overtaken him, as his actions can clearly reveal that. Macbeth was feeling really paranoid because of the things he has committed, his carelessness to his victims and also the ways he has been having meetings with the 3 witches. His feelings and thoughts at this right now moment reassure.

Macbeth’s attitude towards the sad story show as without these strange factors, the play would not have developed. Macbeth’s thoughts have taken over majority of him and it is partially allowing him to deny his role and ways on to what really took over his thoughts and feelings. Macbeth’s thoughts, partly revealing circling his own personal ways ,are and can be proved by when Macbeth went to see the witches in Act V, and he started to boast and brag about his secret ways and his power over the people. This really solidifies Macbeth’s thoughts of carelessness as he kills all the people in relation to certain issues he doesn’t like and seeks advice from the people he should not. Getting to the end of the play, Macbeth is summarizing up his life’s work and completing on the note that it does not mean absolutely anything. Macbeth’s thoughts and really strange feelings are what have allowed him to really think about the question, shouldn’t we all be very greedy, since it does not even really matter in the end? Through all  of the struggle, self  doubt and killing after killing, have all of them led down to the same path, where it all begins. Malcolm will one day eventually become the Lord, and Macbeth will always be known as a horrible traitor.

Macbeth’s thoughts and feelings are a very important in the playing of his overall character, as well it is the thing in which in the end, creates Macbeth, the Tragic Leader. Macbeth by William Shakespeare is a Realistic tragic and reasonably two-sided play in which describes a scary and noble warrior, whom is shown to be a bloody leader, through the witches’ apparitions, his own greed, thinking he is unstoppable and selfishness. Through these changing aspects of the sript, it makes consequently allows Macbeth to show as a important character; who will have great role and impression on the play’s theme. The various themes in which Shakespeare creates throughout this play, is mainly achieved through the  role of the character Macbeth. A couple of the themes in what Macbeth explores from his own actions, behavior, thoughts and attitude  may be his own ambition and greed.

The theme of greed is one of the most serious themes within the play write, as it forms almost all of the play’s conflict and then turns into one of the craziest turning points through Shakespear. Macbeth accordingly accounts for the very slow development of the stories line, as he takes on  one of Shakespeare’s messages he wants to show. Too much greed may not be a bad thing, but the kind of greed one may have, can create a lot of problems. Macbeth created a whole new world when he started to go insane. Greed over took Macbeth from his self and allowed Lady Macbeth to take control over his life. Once he was overcome by her he only became more greedy and vulnerable to do whatever she wanted of him. Killing people only made him a more successful King as so he thought. As Macbeth started to realize that people were slowly catching on to what he had done, he started to lose his mind. Greed and power are the root of all evil and sometimes love can enforce evil into someone

The Theme of Power in Macbeth. (2021, Apr 23). Retrieved from http://studymoose.com/the-theme-of-power-in-macbeth-essay 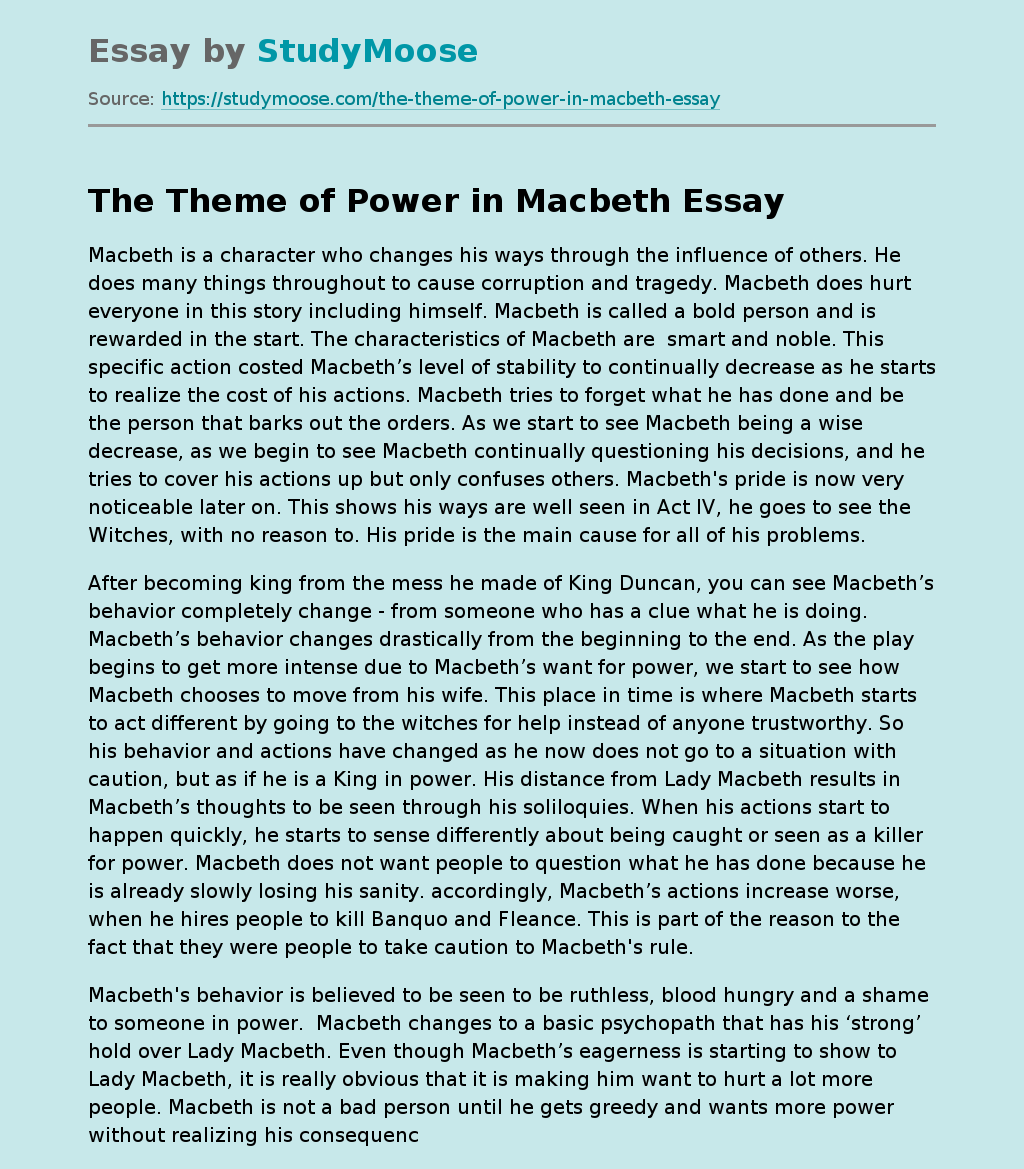