Seven Seconds is one of the most popular tv series viewed on Netflix’s, it will keep you at the edge of your seat for every episode, it also going have times where you may cry, be broken-hearted, be furious, and filled with rage after watching this show. So, you are now pre warned about every filling you would have by watching this show. It’s worth every second you spend watching it. This shows has a lot of eye opening situations that occur in these many episodes that they have released.

Don't use plagiarized sources. Get your custom essay on
“ The Theme of Police Misconduct in Seven Seconds Created by Veena Sud ”
Get custom paper
NEW! smart matching with writer

Also, the cast that was chosen to be in this series are all breathtaking they make you feel if everything was real life in that all the situations where if you’re watching the news in your own home. They touched every little or big problem that is happening in the world. From the 1st scene where the off duty police officer rushing to the hospital where his 1* in only child was being born and accidentally hitting a young African American boy and leaving the scene of the accident, to the last scene where he’s getting off with little to no time because he didn’t get caught covering up an accident that turned into a Murder/hate crime.

This is where you really know whose life matters more and how much the police really gets away with a lot unlawful crimes that anyone who is broke, poor, or just a normal person wouldn’t get away with.

So, do you really trust the police officers? when they say it was an accident or I thought I seen weapon! I’m not saying all police or dirty police officers, but this is something that should get more attention on it and not only by people of color but of everyone who’s believes in right or wrong

I know that as an American you only see the police as who are obviously here to sever and protect, that’s a good way to think because who’s wants to go around thinking that the police officers are not taking their job serious and are just as dishonest as the people that are truly dishonest. Not all police or bad and not every person you see in handcuffs or guilty. As humans we must know that everyone makes mistakes and we all are giving the right to have a bad day. But you must be able to take the heat behind every decision you make. Like in this show where the off-duty police officer wife wasn’t honest with the mom of the young African Americans kid whom was hit by off-duty officers when she kept asking if she knew anything about what happen to her son and the office wife acted if she didn’t know anything. Then things started to come together, and the off-duty police officers was arrested in front of his house not being able to say bye to his son. So, the wife got to feel similar pain in at that time he didn’t know that he was going get off the horrible crime he committed. Imagine being him and his wife to where at the being of the show if he would have just been honest. He could have saved a young boys life in he could have not put everyone through stressful times in losses of their love ones.

This show would teach you a couple of life lessons. I know that some of the people who are set in their ways in no one can change their mind that the police are only doing their jobs. I don’t fault you guys/girls because you only know from the tools you were giving before you even were born. Simple things your skin color, your tax bracket, where you live, or simply who you know. Everyone is not blessed to have them same tools you were giving or worked for. No matter how good the police have been to you that doesn’t mean they give everyone that same respect. Although you might not understand this completely you shouldn’t think that everything that put out in this society is true. Things are known to get twisted a little sometimes in could be an honest mistake in sometime foul play can be apart of it. A good example is the Emmett Till case from 1995 where a woman accused a young 14 year old Africa American of offending her and he was brutality killed, six decades later the lady comes clean in let’s everyone know that she lied on that young boy in she really didn’t seem to care to much about it she said ” they’re all dead now anyways”. This was just a prime example of the police not doing all that they could have did In this situation in why sometimes you have to think for yourself in not go with what’s put out on the news. I know that was totally different in the way the world is ran now but still what’s right is right in wrong is wrong!

This author named James Poniewozik did an article on The New York Times he comments a lot on this. His view on things says a lot because of who he is and who he writes for. He explains very well in he points out the differences that needed to be pointed out he would make a lot of people change their and views on things one of the thing he says is that “Seven Seconds, how imperfectly is about: who gets a break and who gets broken”. That statement itself speaks a lot of volume especially with the injustice crimes that happens every day in America due to the hands of police officers. He also stated that “there’s plenty of such guilt to go around”. Relating to the case in all the police officers wrong doing in unlawful thing they did in said! This was one of the best articles for this essay it’s explains a lot about what happened in the world with all of these unarmed man getting killed due to the police officers because of them mistaking other objects as guns in getting a little slap on the wrist, but still able to keep their job. There comes a point in life where you have to be honest with yourself in know that not all police or good police officers and there maybe there is a different kind of training they should have to go through in order to become an officer, they also shouldn’t be so scared/uneducated about the people they have to sever and protect. It’s must start somewhere before the world gets worse than it already is. And the people who thinks a police officer doesn’t have bad days or makes mistakes you got to think to yourself have you ever made a mistake? Have you ever gone to work mad as ever in took it out on someone who didn’t deserve it? I know for sure you either answer both yes or at least one yes, therefore can’t think just because it’s their job to server in protect they won’t make any mistake because they will. You do!! listen I learn as much as you can about the situation before you choose a side.

Seven Seconds is a good show to watch in help you understanding that police officers makes mistakes in they are not prefect. It’s a big eye opener to the police brutality In how they view Africa Americas. By there actions in some of things they said about different types of race. It influences some of the stereotypes that are place on all types of people like that all black People or in a gang, that some of veterans can’t find work because no one will hired them (I actually stand by this one in think it’s true for some not all veterans), that just because your white in come for a good family that there is no way you can do any wrong, and just because you’re a police officer you don’t do any wrong. You can’t believe every stereotype that’s why it’s just that a stereotype meaning that’s it true about some not all, so give people a chance to show you them before placing judgement on someone or something. Seven second is one of the series on Netflix’s is that makes you think out of box about life in know that everyone deserves what’s they get deciding on the decision that they made, But not everyone gets its its all about who you are and how much you make. Watch Seven second it will be worth every second!

The Theme of Police Misconduct in Seven Seconds Created by Veena Sud. (2021, Sep 10). Retrieved from https://studymoose.com/the-theme-of-police-misconduct-in-seven-seconds-created-by-veena-sud-essay 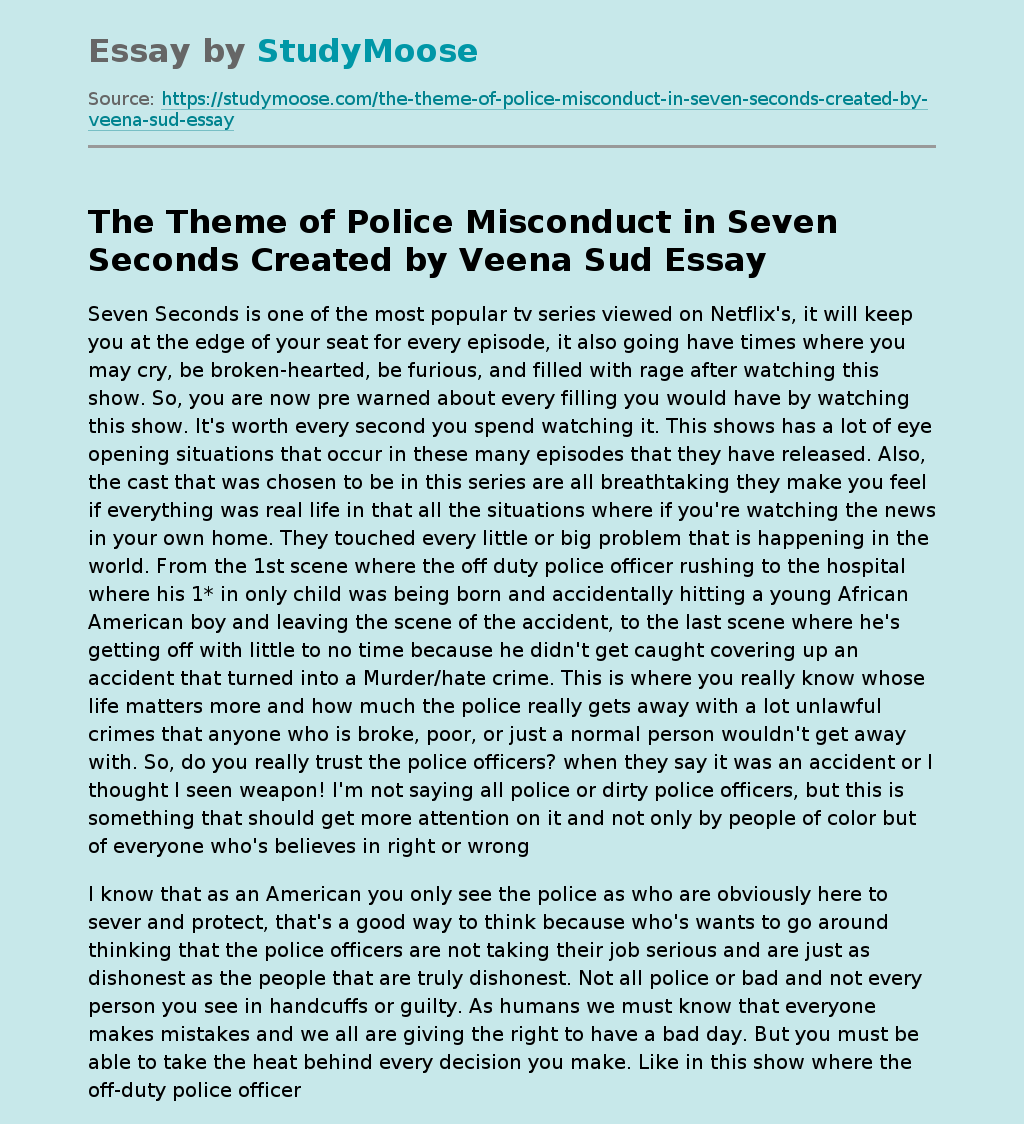