The Theme Of Marriage In Pride And Prejudice

Immediately from the outset of Jane Austen’s Pride and Prejudice the theme of marriage is presented, “It is a truth universally acknowledged that a single man in possession of a good fortune must be in want of a wife” (1) and the question of whether this is indeed the case dominating a large part of the story.

Pride and Prejudice is set in a small town in England and centers around a family, the Bennets, who’s mother obsesses with the need for her daughters to marry into wealth and subsequently secure themselves a comfortable future.

Don't use plagiarized sources.
Get Your Custom Essay on The Theme Of Marriage In Pride And Prejudice Just from $13,9/Page

Within the novel four marriages occur, all of which are very different and offer different insights into the social environment of the time and the way in which marriage was viewed.

Through the four marriages the views of the author, Jane Austen, become apparent as she uses the choices the characters make to portray some of the common practices of the time and her opinion of them.

It is clear that Austen’s view of a true and honest marriage is that it should be a sanctimonious relationship that takes time and effort to build.  This is evidenced through the comparisons of the partnership that is formed between Darcy and Elizabeth with that of Mr. Wickham and Lydia, Mr. Collins and Charlotte and Mr. Bingley and Jane.

Darcy and Elizabeth have a relationship that is built on love instead of issues related to monetary gain and social status.  Although initially viewed as a “disagreeable man” (14) he endears himself to the family and they learn to see through his hard exterior.  There are however, a number of opponents to their marriage and relationship.  Lady Catherine De Borough believes that Elizabeth is not worthy of Darcy and is not of a befitting social status, “Your alliance will be a disgrace; your name will never be mentioned by any of us!” (257).

Lady Catherine is not the only person in the story who is against the relationship.  The Bingley sisters also point out Elizabeth’s unsuitability for a relationship with Darce and ridicule her for entertaining thoughts of being with him.  For them she is not a worthy prize for Darcy,  “Her manners were pronounced to be very bad indeed, a mixture of pride and impertinence; she had no conversation, no style, no taste, no beauty” (26).

Darcy’s and Elizabeth’s relationship develops as they learn and understand one another and they develop a real meaningful relationship, this relationship contrasts strongly with that of Wick ham and Lydia.  Lydia, the youngest sister, forms a relationship with Wickham that is based on attraction and lust.  To Lydia Wickham has “all the best part of beauty, a fine countenance, a good figure, and a very pleasing address” (72).  He does not, however, possess real social stability or status.  Martin Amis in the article Miss Jane’s Prime addresses this, stipulating that their relationship is “all passion” (3) and “not an ounce of constructive judgment (3)”.

The whirlwind nature of their relationship is reflective of Lydia’s personality.  An immature flirty girl she bases her relationship with Wickham on purely “superficial qualities” (Gale, 1992, p2).  This is a stark contrast to that of Elizabeth and Darcy.

Elizabeth’s appreciation for Darcy extends far beyond his physical appearance and it is made clear that this is a more important factor of any long lasting relationship.  A further contrast between the two couples is presented in the way in which the two couples form their relationship.  Wickam and Lydia elope and through doing so break the “patriarchal perspective” (Wylie 4) of marriage and subsequently produce a large amount of gossip.  Her social standing has been lost and the family disgraced.

A further reason for marriage, to secure financial stability, is presented through the partnership of Charlotte and Mr. Collins.

For Charlotte, marring Mr. Collins offers her a secured place in society even though it means she must forego her own personal happiness in the process, “[h]appiness in marriage is entirely a matter of chance” (80)”.  Collins, too, does not marry for love, instead he chooses to form a legal partnership with Charlotte in order to please his superiors and do what is expected by society. This need to behave in a way which society approves differentiates Charlotte and Mr. Collins from Elizabeth and Darcy.  A further way in which two couples are contrasted is through the integrity of their relationships themselves.

While focusing on social acceptance is a significant contrast between Charlotte-Collins and Elizabeth-Darcy, another, also very significant contrast, is their lack of intimacy in their relationship. Collins is willing to marry whoever looks willing to be his wife, and Elizabeth agrees to this to the surprise of Elizabeth, “She could not have supposed it possible [. . .] that Charlotte would have sacrificed every better feelings to worldly advantage” (93).

A further marriage relationship occurs between Mr. Bingley and Jane. These characters paint an extremely interesting portrait of shy, reserved individuals who’s passive natures entail they are too easily influenced by society, “You are each of you so complying that nothing will ever be resolved on; so easy, the servant will cheat you; and so generous, that you will always exceed your income.” (251).  Unlike Elizabeth and Darcy, Jane and Bingley do not have the personal strength to stand up from themselves and what they believe in.

Jane Austen clearly uses the four relationships to express her believe that women do not, and should not, settle for second-rate marriages on the basis on financial or social gain.  Susan Kneeder in her book The New Romance in Pride and Prejudice supports this, “[Jane] Austen offers a vision in which nothing about men’s honest devotion is too good to be true—a prophecy that women need not settle for less” (Kneedler 301).  Of the four marriages it is the one that is built on true love and understanding, Elizabeth’s and Darce’s, which lasts.  However, none of the marriages are without some type of sacrifice.

Charlotte sacrifices personal happiness in order to gain financial security, Mr. Bingley and Jane sacrifice their personal feelings in order to conform to the requirements of society and Lydia sacrifices her reputation and social standing in order to satisfy her vanity and lust.  Despite the success of their relationship, Darce and Elizabeth also make sacrifices.  They too need to sacrifice their social standing and how they are viewed by others as well as needing to adjust and change their personalities in order to make one another happy,  “He is rich, to be sure, and you may have more fine clothes and fine carriages than Jane. But will they make you happy?”

The Theme Of Marriage In Pride And Prejudice. (2017, Mar 20). Retrieved from https://studymoose.com/the-theme-of-marriage-in-pride-and-prejudice-essay 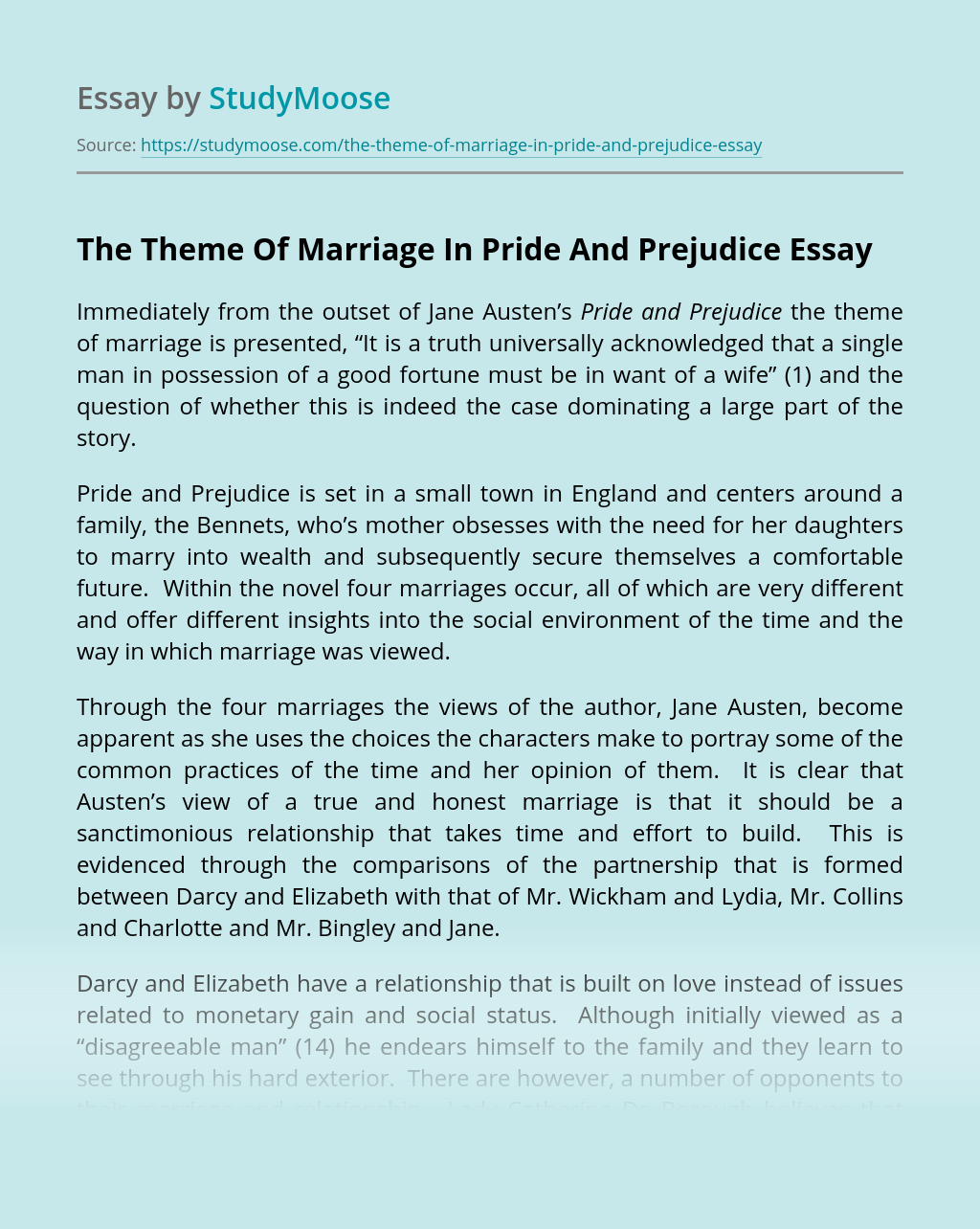 What Is Cultural Diffusion?

Cultural Diffusion is the process by which a cultural trait, material objects, idea or behavior pattern is spread from one society to another. It is very common in ancient times when small groups of humans lived in adjoining settlements and spreading of ideas and culture occurs. Since cultures have never been completely isolated from each...

The woozy feeling when standing up too quickly. After going for a run, feeling as if one more beat and the heart would project itself out of the chest. Or quite the opposite and being in a very relaxed state. These are all changes one experiences at some time or another. What causes the different...

A biased essay can diminish the writer’s reliability in the reader’s eye. Reliability is what makes a writer’s word reliable. If a writer fails to address the other side of an argument or concern, which they feel strongly, by paying no attention to it or by dismissing it, it is less likely that a reader...

After the validation of the instrument, the researchers secured a written permit to the administrators of Alicia National High School, Records from the registrar office and guidance office are useful enough for the needed data on the list of student who are dropouts, repeaters, balik-arals and students with failed grades. After given permission, the researchers...