The theme of hardship in the novel Of Mice and Men

The theme of hardship is presented in the novel Of Mice and Men _by John Steinbeck._ Hardship is a theme most people can relate to, as there are many types of hardships in people’s lives. For example, George and Lennie have trouble keeping a job, don’t own anything, get into unwanted trouble, and have personal hardships in the novel. The writer uses the conventions of setting, conflict and characterisation to get the theme across to the readers.

Setting is used to establish the time, place and mood in a story.

Don’t waste time
Get a verified expert to help you with The theme of hardship in the novel Of Mice and Men
Hire verified expert
$35.80 for a 2-page paper

The novel Of Mice and Men is set in the countryside of California, during the 1930’s. During this time there was long-term unemployment which leads George and Lennie to travel in search of more work, as it was difficult for the two to keep a steady job. Most men travel alone but George stays with Lennie even though it means work would be harder to keep. “You can’t keep a job and you lose me ever’ job I get.

” George says this to Lennie at the beginning of the novel. Adult readers can relate to George because they know how difficult it is to find a job and is forced to sympathize with George and Lennie.

Travelling place to place has consequences that George and Lennie face. They are unable to call anything their own except what they can carry on their backs. They don’t have the money, stability or privilege that many people do. When the reader is first introduced to George and Lennie’s dream, George says “Guys like us, that work on ranches, are the loneliest guys in the world.

They got no family. They don’t belong no place.” Readers of all ages are compelled to empathize with the characters and their hardships. Travelling together for work brings unwanted conflict between George and Lennie, and others.

There are many conflicts George and Lennie face together in the novel such as Lennie against Curley, Lennie against Curley’s wife and Lennie against George. All of the conflicts evolve Lennie but impacts both Lennie and George. Even though these two characters don’t want any trouble, trouble finds them. When George and Lennie were first introduced to Curley tension rose. Curley forces Lennie to speak when George instructed him earlier to leave the talking to him. Lennie acted nervously when he and Curley first met which Curley ignored and continued to intimidate Lennie. Curley only attacks Lennie because of a personal grudge against bigger men.

Curley starts a physical fight between him and Lennie which resulted in Lennie breaking Curley’s hand. After that Lennie says to George “I didn’t want to hurt him.” Lennie was just frightened and doesn’t realize his own strength. The reader becomes a little scared or concerned for Lennie especially when Lennie accidentally killed Curley’s wife. Lennie was so frightened about George being mad at him that he took his frustration on Curley’s wife. He kept saying “Don’t you go yellin'” and “I don’t want you to yell”. In this moment the reader is frightened from Lennie is also upset because if it hadn’t been for George threatening Lennie, he would get so worried or paranoid about what he does. Just because of whom Lennie is George acts so harshly towards him.

The theme of hardship in the novel Of Mice and Men. (2016, Aug 14). Retrieved from http://studymoose.com/the-theme-of-hardship-in-the-novel-of-mice-and-men-essay 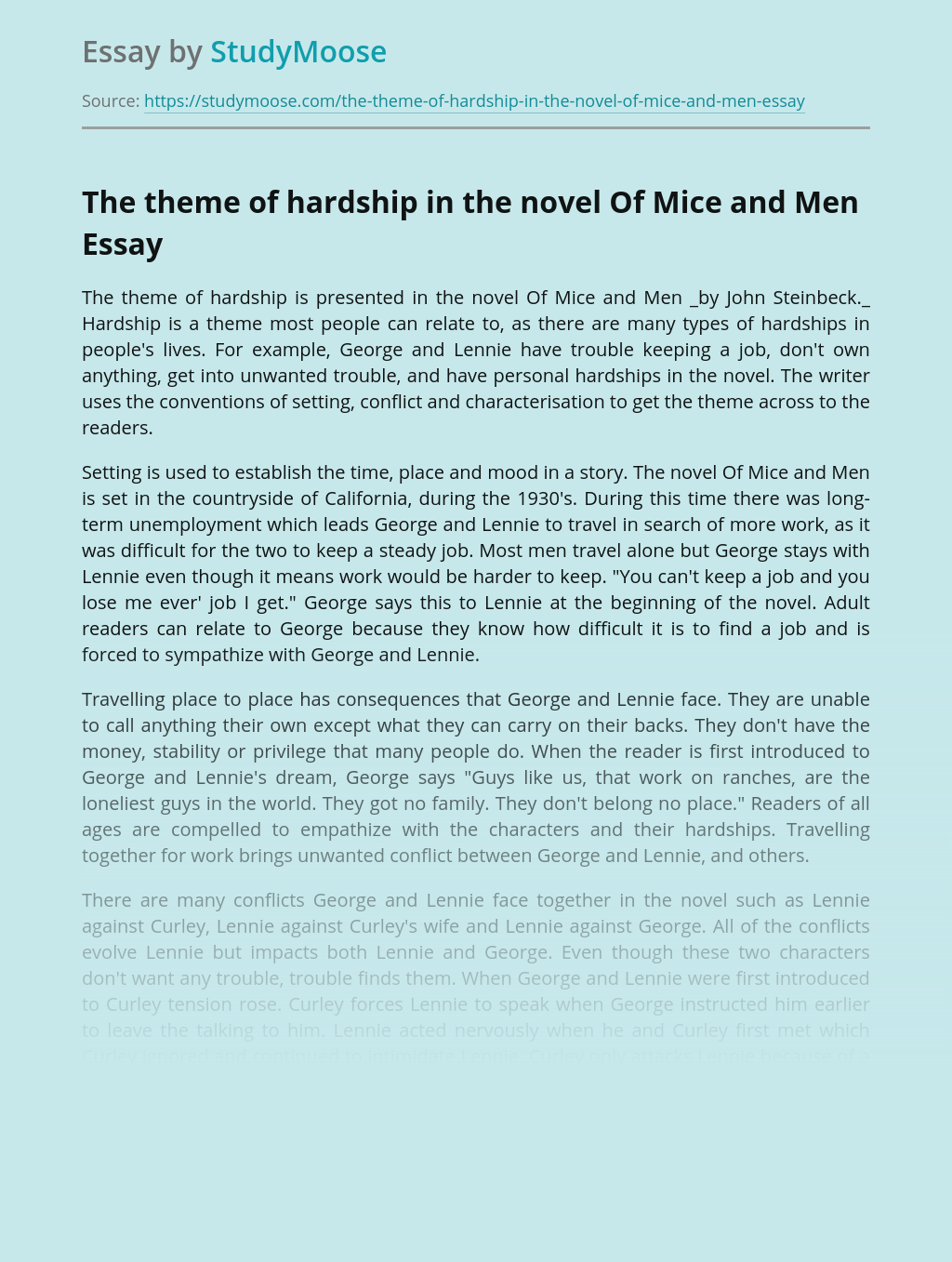 Don’t waste time
Get a verified expert to help you with The theme of hardship in the novel Of Mice and Men
Hire verified expert
$35.80 for a 2-page paper
Stay Safe, Stay Original