The Texas Rangers and the Mexican Revolution

Charles Harris III and Louis Sadler share the details behind this unstable period by uncovering the views and actions of the Rangers during the highest point of border violence up until that time. The Rangers remain as one of the most recognized law enforcement agencies in the United States.

In the ten year span of 1910-1920, Texas was involved in a lot of turmoil around the border of The United States and Mexico.

Don't use plagiarized sources. Get your custom essay on
“ The Texas Rangers and the Mexican Revolution ”
Get custom paper
NEW! smart matching with writer

These were the years of the Mexican revolution and the increasing racial tensions between Anglos and Hispanics often resulted in bloodshed. They played important roles at various battles and established a fearsome reputation. The Texas Rangers are often portrayed as the last stand of defense between the good and the bad; rugged men with enough ice water in their veins to fuel their souls. After reading this book, one’s perspective of the Texas Rangers, and the myths that surround them, may soon change.

Rangers were also cold-hearted angry law men who seemed to have a serious grudge against Hispanics and Mexicans who resided in Texas. They appeared to possess a “what are you going to do about it” mentality. Harris and Sadler are faithful to history and attempt to stick to the facts by being informative as they review the disorder and terror of the Mexican revolution. They suggest that men who joined the Rangers did not change as a whole, but the public’s perception of them did.

The Texas Rangers were first called into service as the governor’s personal bodyguards and would remain answerable to the head of the state.

The relationship between the two entities

The relationship between the two entities resulted in a history infused with politics. Every new administration would lead to a shift in leadership and Ranger personnel. It was near impossible for a man to rise through the ranks of the organization without having an alliance with the current party in office. It was the governor who ultimately determined how The Rangers would function. The Force continued to be dominated by politics until 1935, when The Department of Public Safety was created, taking the Rangers away from the governor.

Ironically, Harris and Sadler suggest it was the Mexican Revolution that ultimately saved the Texas Rangers. Between 1910 and 1920, the strain between the United States and Mexico was explosive and despite their affiliation with the governor’s office, legislators were reluctant to spend large amounts of money on the organization, meaning Ranger pay was poor. They had to furnish their own weapons, horses, and saddle. The low salaries dissuaded many quality men from enlisting and even fewer from making it a career. The Mexican Revolution helped usher in a new era for the Rangers.

It reinvigorated their numbers. By 1918 the Force reached a high of one thousand men. The Mexican Revolution enabled them to continue as an independent agency. It also resulted in the most controversial event in the history of the Texas State Ranger Force known as the “Bandit War” of 1915 which resulted in a series of deadly executions. The two authors bring their extensive knowledge of the revolution to the forefront, detailing the events that led up to the conflict. Their discussion of the Plan de San Diego, an attempted revolt by Mexicans across the border, was truly terrifying.

Rebels essentially wanted to ignite a race war. They encouraged Mexican nationals, Native Americans, Mexican-Americans, and African-Americans who were residing along the border to kill every white male sixteen years and older. The drastic move was seen as a “Hispanic struggle for social justice” (p. 212). Texas would become the primary focus of the rebels, and the Rangers were recruited after the plan was seized during the arrest of Plan de San Diego organizer Basilo Ramos, Jr. , in McAllen, Texas. The retaliation that followed resulted in a number of bloody shootouts, both just and unjust alike.

The Plan de San Diego provided an excuse to both Anglos and Hispanics to settle scores and seize opportunities. The authors unveil how the backlash resulted in a wave of racism and the deaths of some three hundred Mexican nationals. Harris and Sadler bring light to little known historical events which seem to still affect relationships and feelings between both sides of the warring parties. For example, they suggest The Plan de San Diego was probably devised by supporters of Mexican rebel, Venustiano Carranza, in his homeland and not the town of San Diego, Texas.

His motive was to divert the attention away from his rival Pancho Villa. In their attempts to maintain an accurate depiction of the organization, the authors do not cloud details to try and uphold any political or social agenda. They show how Mexicans felt justified in their struggle and how the Texas Rangers often misrepresented their own actions. One incident revolved around Captain William Warren Sterling of Hidalgo County. In his own memoirs, he made claims that he never shot, or even pistol-whipped a man. He wrote, “Throughout my lifetime, I have held a high regard and deep esteem for Latin Americans. Some of my best friends are members of that important segment of our citizenship” (p. 270).

Yet, the writers published a claim that Sterling shot and killed, among others, an innocent Mexican boy accused of rape. They support the assertion with an article reported in the Brownsville Daily Herald in 1914. In fact, the authors claim it was common practice for the Rangers to mislead the media. They even refused to comment publicly about the killing of Mexican bandits, forcing newspapers to rely on second and third hand sources.

The conflict between Anglos and Mexicans

The conflict between Anglos and Mexicans along the border continues to be mirrored in current events such as the debate over immigration reform. Many people fear Texans of Mexican descent still maintain an allegiance to their native country and seek retribution for past atrocities. As the writers put it, “Militant Hispanics were outraged that the Americans stole Texas from the Mexicans-who stole it from the Spaniards, who stole it from the Indians, who stole it from each other. ” The tension between the races is deep rooted and heavily tied to claims over territory.

The brutality of the war and the extensive causalities along the Texas/Mexico border led the Texas Legislature to take action against The Rangers. Many of their war-crimes were revealed after a thorough investigation was made into the claims made by dozens of victims. The organization was restructured and their numbers were reduced. The Texas Rangers have spent a large part of the post revolutionary period to re-establish their dignity and make over their image. Like all stereotypes, the image of The Texas Rangers holds some truth to it. This was a group of ordinary men facing extraordinary circumstances.

On the surface their achievements might appear minimal, but the fact that they were able to achieve anything of significance without the proper guidance and resources is quite extraordinary. Harris and Sadler are not attempting to be revisionists, instead, they present both the positive and negative elements of The Texas Ranger Force and encourage readers to form their own opinions based on the available evidence.

The Texas Rangers and the Mexican Revolution. (2020, Jun 02). Retrieved from https://studymoose.com/the-texas-rangers-and-the-mexican-revolution-new-essay 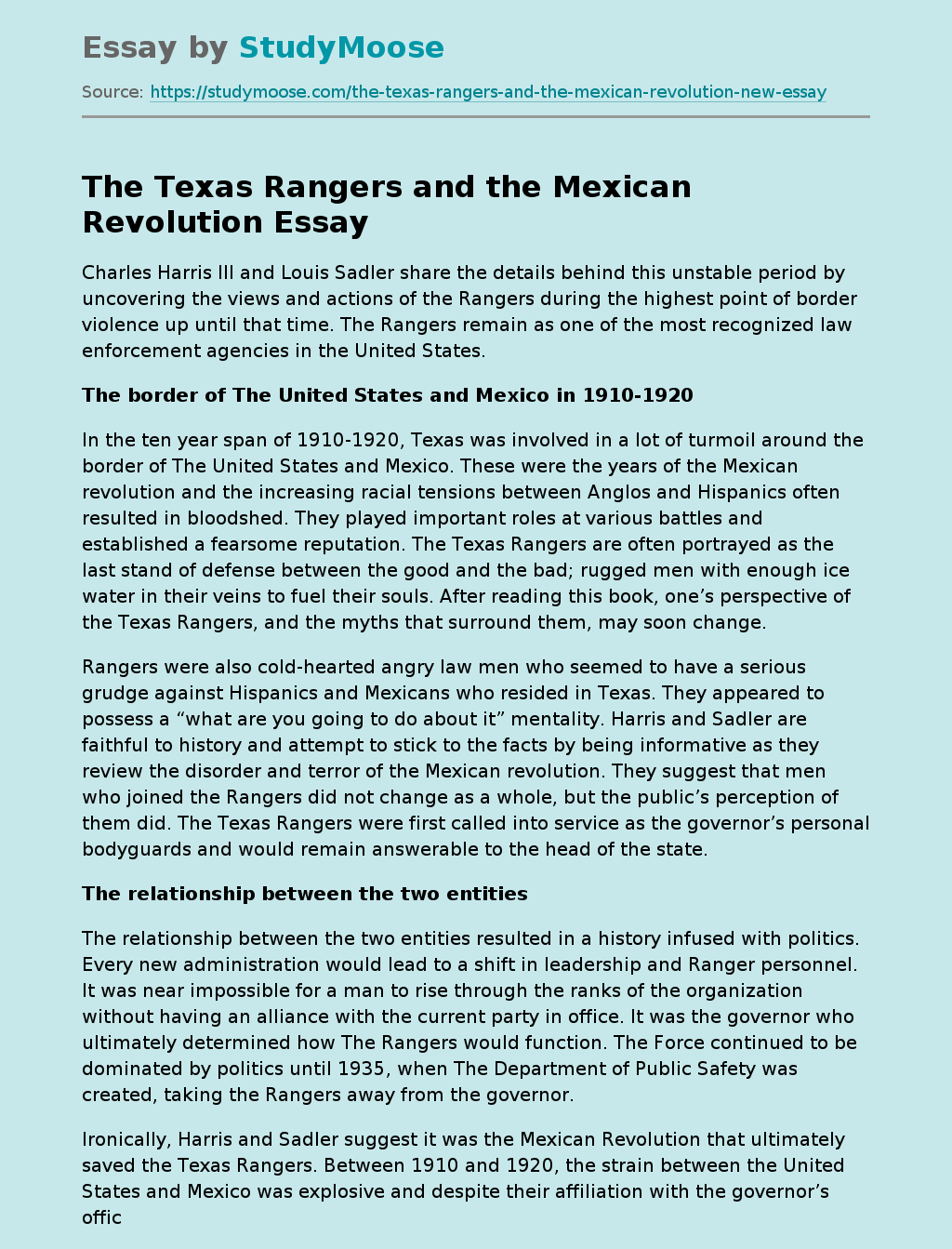